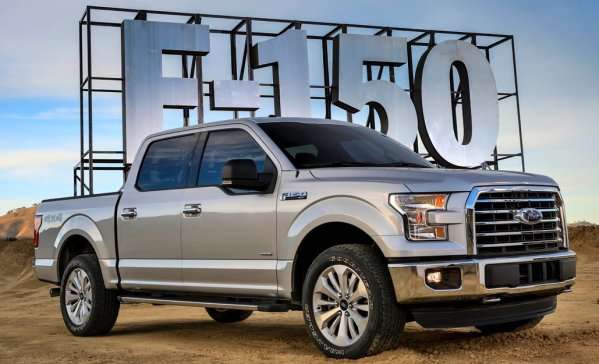 The Insurance Institute for Highway Safety has published the results of their newest truck testing process and the new Ford F150 was the only truck to receive a “good” rating in every category – resulting in the F150 being the only truck to get the IIHS Top Safety Pick in multiple cab configurations.
Advertisement

While cars and sport utility vehicles have long been scrutinized for their ability to protect occupants in the event of an accident, larger pickups haven’t been subject to the same level of testing until the past few years. During the 2015 Insurance Institute for Highway Safety testing process, the Ford F150 didn’t do particularly well in the IIHS “small overlap front crash test”, but after some revisions to the aluminum bodied pickup – the F150 has rocketed to the top of the IIHS list.

2016 IIHS Truck Tests
In the recent testing, the IIHS submitted 9 of the most popular modern half ton trucks on the market to their newest small overlap front crash test. During past tests, the F150 had issues with the steering column pushing into the cabin, but based on both the test results and comments from the IIHS – those problems are a thing of the past. In fact, during the recent IIHS tests, both the Ford F150 SuperCrew and Super Cab scored the “good” rating (that is the highest) in all six individual categories and overall. The F150 was the only truck to score “good” in all of the categories, it is the only truck to receive an overall rating of “good” and it is the only truck to receive the IIHS Top Safety Pick award for multiple body styles.

GM, Toyota Trucks are “Acceptable”
After the new Ford F150 SuperCrew, there were three trucks which received the overall “acceptable” score from the IIHS. The Chevrolet Silverado 1500 Double Cab and the GMC Sierra 1500 Double Cab (basically the same trucks with different badging) were joined by the Toyota Tundra Double Cab, all of which scored “acceptable” in Structure and “poor” in Lower Leg/Foot, while scoring “good” in the other categories (Restraints, Head/Neck, Chest, Hip/Thigh).

While these crash test “awards” are little more than a feather in the cap of many automakers, these safety tests are particularly important for the new Ford F150. When the newest F Series was introduced with an aluminum body, many people were concerned that these trucks wouldn’t provide the same protection in the event of an accident. These tests prove that not only is the F150 aluminum body just as safe as the competition in an accident – but you actually stand the best chance of walking away from an accident if you are driving the F150.

In addition to being the only modern pickup to receive the IIHS top honors in both SuperCab and SuperCrew configurations, the Ford F150 is also the only truck to score 5 stars in every category of the NHTSA’s crash test procedures in every cab configuration.
In short, when it comes to the most well-known safety tests in the industry – the Ford F150 with the aluminum body Is the safest in the segment.

“From the moment our team set out to design and build the new F-150, we knew it had to be best-in-class,” said Raj Nair, Ford executive vice president, Global Product Development, and chief technical officer. “This Insurance Institute for Highway Safety Top Safety Pick is another example of Ford’s commitment to building the toughest, smartest, most capable and safest F-150 ever.”

RLW wrote on May 12, 2016 - 10:45am Permalink
Congratulations to Ford for offering a safe pickup to consumers. I have noticed in previous safety testing that only Ford and Toyota seem to get ALL tests while the other brands, according to the testing website only have partial testing then of course claim a 5 star per se and in small print (on one test). Way to go on all tests!

Toyota's First EV Will Have a Name of BZ: Toyota BZ
First Videos From Inside The Boring Company's Las Vegas Loop
END_OF_DOCUMENT_TOKEN_TO_BE_REPLACED