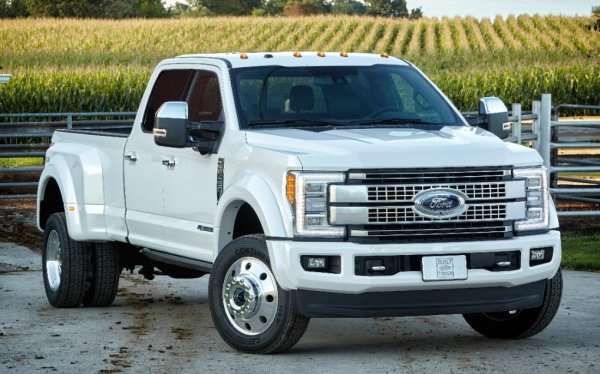 The aluminum bodied Ford F150 and Super Duty pickups have been awarded with several titles on the first day of the 2016 LA Auto Show, including the 2017 Motor Trend Truck of the Year – setting up Ford as the favorite for the 2017 North American Truck of the Year.
Advertisement

When Ford introduced the 2015 F150 with an all-aluminum body, there were a great many critics of this lightweight skin. Even as F150 sales soured through the 2015 and 2016 model years, critics insisted that the aluminum body is sure to be a problem sooner or later…even though we haven’t seen any issues in the millions of miles logged on the new F150 by owners around the country.

Of course, with the news that the 2017 Ford Super Duty would also have an aluminum body, those same critics have been vocal about the “dangers of aluminum”, but as has been the case with the 2015-2016 F150 owners, the publications which hand out annual awards aren’t bothered by the alloy body.

With the start of the LA Auto Show today, there have been three awards announced for the Ford F Series trucks, with some attention paid to the F150 and the new Super Duty.

Two Titles for the F150
First off, we have a couple of awards for the Ford F150.

The folks at Kelley Blue Book have named the 2017 F150 their Best Buy of the Year for the truck segment marking the third straight year that the F150 has taken the KBB title. To be clear, the Ford F150 has been the best truck according to KBB every year since it was introduced with the aluminum body.

Also, the 2016 Ford F150 was named one of Strategic Vision’s Most Loved Vehicles of the year. Strategic Vision is a research company that introduced their Consumer Love Index, which compiles data from new vehicle owners in more than 120 categories to find which vehicles are the most loved among consumers. Not surprisingly, the bestselling truck in America is also the most loved.

Big Title for the 2017 Super Duty
The Motor Trend Truck of the Year award is one of the most sought after titles among the American automakers and for the 2017 model year, the new Ford Super Duty was named the best by Motor Trend.

“We judge the contenders based on six categories – from design to efficiency to performance – characterizing the things consumers want most in their next vehicle,” said Ed Loh, Motor Trend editor-in-chief. “The all-new 2017 Ford Super Duty met and exceeded our criteria, truly proving it is the undisputed leader in towing, capability and power – exactly what truck customers want. Motor Trend is excited to crown this purpose-built machine this year’s Truck of the Year.”

The 2017 Ford Super Duty is the fifth Ford F-Series model to win the Motor Trend Truck of the Year, and with the Super Duty included in the final three for the North American Truck of the Year – the aluminum-bodied F250, F350 and F450 are poised to claim the top truck title in the USA.

“We are honored to win this year’s Motor Trend Truck of the Year Award as it underscores how the all-new 2017 Ford Super Dutys are the toughest, smartest and most capable trucks we’ve ever built,” said Joe Hinrichs, Ford’s president of The Americas. “For 39 consecutive years, Ford F-Series has been America’s favorite truck, and now Motor Trend has given one of our F-Series top honors for the fifth time.”