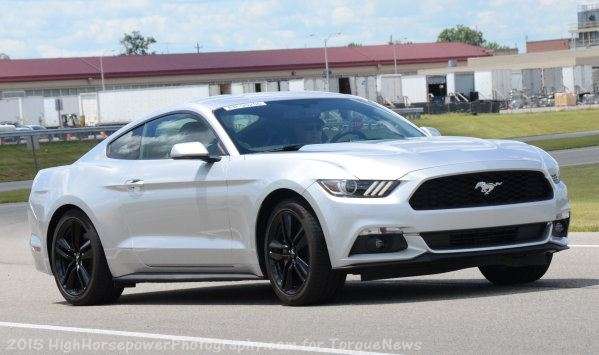 The 2015 Ford Mustang is selling very well in its first few months and while the Motor Company hasn’t offered up any official take rate numbers for the three engine options, a Ford dealership representative explained that the EcoBoost is moving quicker than the V8, while V6 sales are nearly nonexistent.
Advertisement

In January 2015, the strong sales numbers for the Ford Mustang were comprised entirely of the new 2015 models, and in the Metro Detroit area, I am seeing more and more new Mustangs every day. I have seen plenty of 2015 Mustang GT coupes with the 5.0L fender badge, but it seems like I have seen more new Mustangs that don’t have the 5.0L badge – meaning that they are either EcoBoost or base V6 models.

Unfortunately, the EcoBoost and V6 Mustang are hard to differentiate in passing traffic, so I reached out to Ford Motor Company to see if they had a take rate breakdown for the three available engines. Ford was not able to provide those numbers just yet, so I spoke to a few of my dealership connections and one had very interesting insight – the EcoBoost is moving quicker than the GT, and there is almost no interest in the V6.

One Ford Dealer’s Mustang Sales
Before getting into what I learned in speaking with one Ford dealership employee, I should point out that these are not official, measured figures from the dealership. This is the observation of a dealership employee who happens to also be a big Mustang enthusiast, so she simply provided me with what she has seen at work.

She explained that the 2015 Mustang EcoBoost is the quickest selling trimline at her dealership, usually only sitting on the lot for a few days before being purchased. She said “it’s selling better than the GT is for sure”. She also mentioned that there has been very low interest in the base V6 Mustang, with those models often sitting on the lot for weeks before being purchased. Because of that, very few V6 Mustangs have been delivered, while the EcoBoost and GT models have been flying in and flying out.
Again, this doesn’t mean that the EcoBoost Mustang is outselling the Mustang GT across all Ford dealerships, but the strong sales of the turbocharged 4-cylinder at this dealership proves that the market will happily accept a 4-cylinder Mustang.

This Shouldn’t Be a Surprise
While some people might be shocked to hear that the EcoBoost engine is outselling the 5.0L V8 at one Ford dealership, we should all keep in mind that the base model Mustang is typically the better selling package. In a normal year, the V6 Mustang outsells the Mustang GT, and that is also true for the Chevrolet Camaro and the Dodge Challenger – the less expensive, more fuel efficient models sell better. That is no surprise.

I suspect that when Ford Motor Company does announce the take rate figures for the 2015 Mustang, we will see a close sales race between the 5.0L V8 and the EcoBoost 4-cylinder, while the V6 is far, far behind.

A special thanks to my Ford dealership connection who offered up her observations!