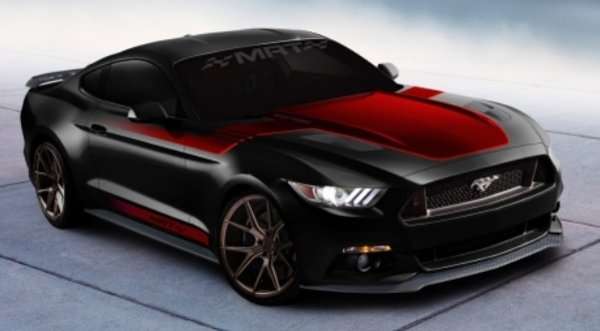 Ford is Bringing a Twin Charged EcoBoost Mustang to SEMA

While it likely wont be the most powerful Ford Mustang on display at the 2016 SEMA Show, the supercharged and turbocharged 2017 Mustang from the crew at MRT will almost surely be one of the most interesting builds at the sprawling Vegas show – and the Motor Company has offered up just enough information to get us on the edge of our seats.
Advertisement

We have already previewed two of the new Ford Mustang show cars which will debut next week at SEMA 2016, but both of those modern muscle cars were fitted with the 5.0L V8 (click here for a closer look at those cars). Today, we bring you a preview of a new EcoBoost Mustang from MRT, which has a compound forced induction setup with a supercharger joining the turbocharger for one wicked twin charged Mustang.

While the car looks great on the outside, what is packed under the hood is the real story. This Mustang started life as an EcoBoost model with the turbocharged 2.3L 4-cylinder engine, packing 310 horsepower. The crew at MRT added a Vortech supercharger that works with the factory turbocharger, along with a larger intercooler, a blow off valve and a waste gate – all from Vortech. MRT also added an in-house stainless steel exhaust system and while they haven’t announced the power levels with the twin charging setup, there is no way of measuring just how cool this project is.

This mean looking, twin charged Ford Mustang EcoBoost will debut next week at the Ford display at the 2016 SEMA Show alongside the rest of the high performance and high style Ford vehicles.