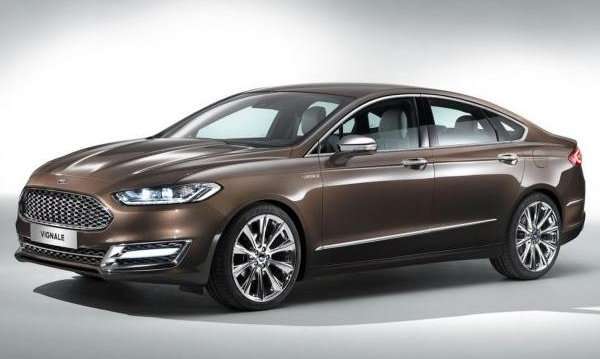 Ford Motor Company has announced that to offer European customers a more premium ownership experience, they are rolling out the new Vignale sub-brand – bringing a more luxurious feel to models currently offered overseas and beginning with the Ford Mondeo.
Advertisement

While Ford Motor Company offers high end packages in Europe including the Titanium X trimline that contain all of the bells and buzzers that most consumers would expect of a luxury brand – the Motor Company does not have a real luxury lineup in Europe. The European buyers are not privy to the gorgeous Lincoln lineup so to give deep pocketed buyers a luxurious ownership – Ford will introduce the Vignale sub-brand. Vignale will not have its own vehicles like Lincoln does in the US but instead; the Vignale branded models will bring a full scale luxury feel to models already on sale. The Vignale models will feature high end luxury appointments inside and out but owners of Vignale Ford products will benefit in other areas including VIP air travel and banking services. At the airport, Vignale owners will enjoy chauffeuring, VIP check-in services and “clubhouse” access while the unique banking experience will include dedicated account managers, concierge services and reward points for things like hotels, restaurants and more.

The first example of the Vignale sub-brand is the Ford Mondeo Vignale Concept which is slated to make its formal debut next week at the Frankfurt Motor Show in Germany. The Vignale Mondeo wears unique 20 inch wheels with a super high gloss chrome finish, chrome door handles, chrome mirror caps, a unique chrome mesh grille, a package specific lower front fascia with big LED fog lights and more chrome trim and – of course – chrome Vignale badging. The Vignale Mondeo is also finished in a new metallic "Nocciola" dark brown exterior shade. On the inside, the Vignale Mondeo is heavily clad in soft touch leather on the steering wheel, around the gauge cluster, across the top of the doors and on the center arm rests in addition to the plush, luxurious seats. These seats also bear a striking quilted design that looks incredibly opulent – like something that you would see in a European super-luxury car. There are also Vignale logos on the center stack and on the headrests. The Vignale Mondeo will also feature all of the “standard” goodies that you would expect in any luxury car including a high end touch screen infotainment system a premium sound system and a premium gauge cluster design.

"Vignale represents the highest expression of the Ford brand in Europe from both a product and from an ownership experience perspective," said Stephen Odell, Ford president of Europe, Middle East and Africa. "The Ford Mondeo Vignale Concept showcases the features that customers tell us they want in terms of styling and quality, advanced technology and exclusivity."

The Vignale Mondeo is expected to hit showrooms in 18 months or so and it will be available as both a saloon (sedan) and wagon when they arrive on the consumer market in 2015. After the Mondeo helps to introduce the Vignale sub-brand, Ford expects to give a similar super luxury treatment to the new S-Max family tourer and the Edge midsized SUV.

Ford does not intend to introduce the Vignale brand in the United States but considering that we get to Lincoln brand, it is a fair trade. Ford probably doesn’t need to introduce a super luxury version of the Ford Fusion as we already have the very impressive Lincoln MKZ but for European buyers who want a more luxurious Ford sedan with premium services – the Vignale brand should be a popular addition to the lineup.