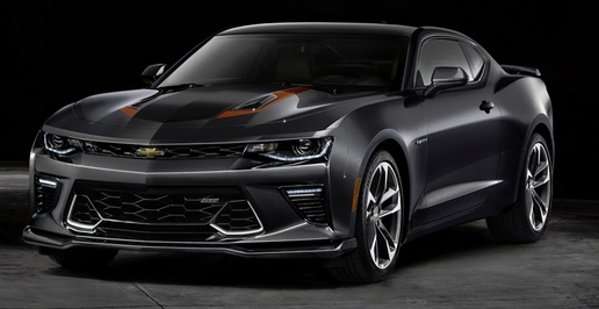 The very first Chevrolet Camaro ever was introduced for the 1967 model year so with the 2017 model year comes the official 50th anniversary of the fabled muscle car and GM is celebrating the occasion with the 50th Anniversary Edition 2017 Camaro – the first of which will be auctioned off tomorrow to benefit the United Way of Southeastern Michigan.
Advertisement

While some people had hoped for some super-exclusive, high performance package to celebrate the Camaro’s 50th anniversary, General Motors opted to go with a package that is more acquirable to the masses. We are likely to see a great many of these specially equipped Camaro coupes and convertibles on the street when they hit dealerships later this year, but the very first 2017 Camaro 50th Anniversary Edition will hit the auction block this weekend at the Barrett Jackson Palm Beach Auction.

This will give some Camaro collector or enthusiast the opportunity to pay big money for the first 50th Anniversary Edition 2017 Camaro, but more importantly, all of the proceeds of the auction will go to benefit the United Way of Southeastern Michigan.

The 2017 Camaro 50th Anniversary Edition
The 50th Anniversary Edition package for the 2017 Camaro is available on both the coupe and convertible in either 2LT or 2SS form. This means that these specially equipped Camaros will be fully loaded plus the unique features of the “Fifty” package, with either the 3.6L V6 or the 6.2L V8 and either the manual or automatic transmission.

The unique features of the 50th Anniversary Package begin on the outside, where all of these muscle cars are painted Nightfall Gray Metallic exterior and on the convertibles, there is a black canvas convertible top. Next, all of these special edition Camaros get unique 20 inch wheels with unique center caps, a unique grille filler with satin chrome trim, a body colored front splitter, orange brake calipers, “Fifty” badges and a unique stripe pattern on the hood and trunk lid with a black center section flanked by orange trim. Also, those buyers who opt for the 50th Anniversary Edition in 2LT form will get the RS package in addition to the Fifty-specific goodies.

There hasn’t been any word on official pricing for the 50th Anniversary Edition Camaro, but we can expect that it will be slightly pricier than the standard 2LT and 2SS.

The listing for the first 50th Anniversary Edition Camaro mentions both a coupe and convertible, along with mentioning the special features of the package, but it doesn’t not specify the engine, transmission or body style. This likely means that the winner of the auction can pick the trimline, the transmission and the body style – and if it were me, I would pick the 2SS convertible with the 8-speed automatic – but that is just my personal opinion.

Most importantly, when the final gavel sounds for the first 2017 Camaro 50th Anniversary Edition, all of that money will be going to the United Way of Southeastern Michigan. Based on past “first car auctions”, this Camaro will almost certainly sell for somewhere in the six figure range and if a bidding war breaks out – this unique muscle car could raise up around a million dollars. This isn’t the first 5th gen Camaro or 6th gen Camaro, but it is the first unit of the only 50th Anniversary Edition Camaro that will ever be built, so there might be big money involved.