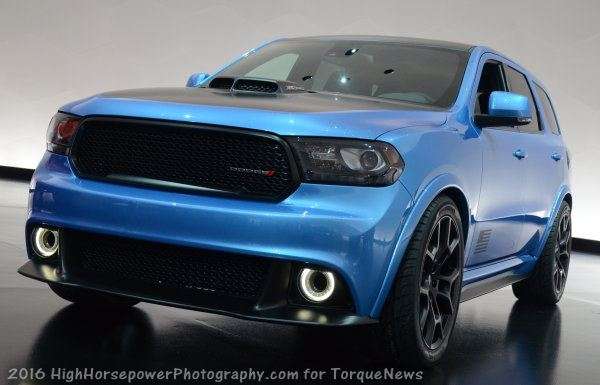 There have long been rumors that Dodge has been working on an SRT-level Durango with the 392 Hemi, and while this beautiful machine is only a SEMA Show concept right now – this 485 horsepower beast has all of the makings of a great high performance sport utility vehicle.
Advertisement

Although the Jeep Grand Cherokee has done a masterful job of leading the American SUV segment in terms of high performance capabilities, there has been a consistent demand from the Dodge camp for a proper SRT-level Durango. The Durango R/T is a great vehicle, but it just doesn’t pack the punch of the SRT Jeep – and that 485hp shot is what many hopeful owners are after. There have long been rumors that FCA is working on an SRT Durango, but we haven’t seen any real proof of that until now.

Keep in mind, this Dodge Durango SRT Shaker Concept is a typical SEMA vehicle with a handful of “wow factors” which aren’t likely to make it to a production model, but aside from a few relatively non-essential details – this Durango looks just about perfect.

Dodge Durango 392 Shaker Concept
While there is far more to this stunning SUV than the hood and the engine, those two aspects are among the most important since they are pointed out in the name of the Dodge Durango 392 Shaker. Like the modern Dodge Challenger, this Durango features the fully functional Shaker hood system which helps to feed plenty of cold air to the 392 cubic inch Hemi which is tucked under the Shaker scoop. The simple fact that Mopar has previewed the SRT Durango with this powerful concept is enough to draw a crowd at a normal show – but SEMA isn’t a normal show, so Mopar didn’t stop with just the engine and the hood. To make this a proper SEMA Show vehicle, Mopar added a unique front fascia with the Hellcat Challenger air catcher headlights serving as fog lights, a new crosshair-free grille, a set of 22 inch wheels wrapped in high performance rubber, the big brakes from the Hellcat Challenger, a unique rear fascia with twin 5 inch exhaust tips exiting through the middle and a uniquely decorated satin black fuel door.

To improve the stance and the performance, Mopar has added a sportier suspension setup to the Durango 392 Shaker Concept and to finish off this wicked show vehicle, Mopar added six Viper seats. That’s right – the Durango 392 Shaker maintains its three rows of seating, but it does so with three pairs of carbon fiber-clad seats from the Dodge supercar.

The Production-Friendly Dodge Super SUV
If the rumors are to be trusted, Dodge is currently working on an SRT variant of the Durango, so in the coming year, we could see an actual 392 Durango at your local dealership, but in checking out the 392 Shaker Concept at SEMA – it seems that much of this show vehicle is production-friendly.

I will say that the six Viper seats are probably going to be too expensive for a production model, so those aren’t likely to make it to any sort of production 392 Durango. Also, while the center-exit exhaust in the custom rear fascia looks amazing, having the exhaust tips there would remove the ability to tow and with the 392 Jeep Grand Cherokee being such a great all-around SUV, I don’t think that Dodge would do something to prevent the Durango 392 from being as functional.

Finally, I am not sure if the “air catcher” headlight assemblies from the newer Challenger would provide enough light to really serve as the fog lights/driving lights on a production Durango, so I don’t know if that feature would make it to production, but I find everything else about this show vehicle to be relatively production-friendly.(More on Page 2)

Sure, the 22 inch wheels are a little much, but the current Durango R/T comes with optional 20 inch wheels which would fit the part just as well, provided that they fit over the huge Hellcat front brakes. Of course, there is a chance that the Durango 392 wouldn’t have the big Brembo brakes, but with the SRT-level Challenger and Charger offering them – I would like to think that they would at least be an option. Finally, the Shaker hood looks absolutely perfect on this Durango concept, but with FCA only offering the Shaker on the Challenger, I don’t know that they would begin offering it on a Durango.

However, if Dodge can figure out a way to get a Durango 392 on the road that looks somewhat like this concept vehicle – even without the Shaker hood, the center exhaust tips or the high tech driving lights – it will be a smash success.