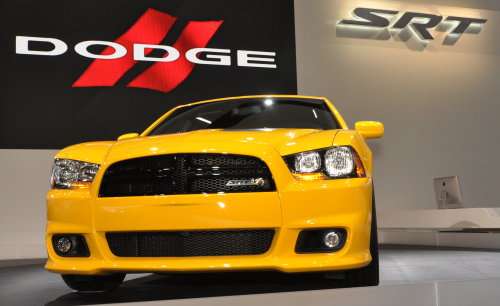 The fuel sipping 2013 Dodge Dart may have been the big show-stopped for the Chrysler Group at the 2012 Detroit Auto Show but perched proudly on a nearby turntable is the high performance Dodge Charger SRT8 – clad in yellow and black as part of the sexy Super Bee package as Detroit show-goers have their first chance to meet this awesome sedan.
Advertisement

The new Dodge Charger SRT8 Super Bee made its formal debut at the 2011 LA Auto Show but with the public pouring into Detroit’s Cobo Hall, the Motor City crowd is getting to feast their eyes upon this limited edition 4-door muscle car for the first time. Like the previous Charger SRT8 Super Bee packages that debuted in 2007, the 2012 Charger Super Bee is predominantly an appearance package rooted around the glowing Stinger Yellow paint code with black trim – although buyers can also opt for a Pitch Black exterior with grey trim. As you can see in the gallery on the right, the 2012 Charger Super Bee includes a black dual pedestal rear spoiler, a gloss black trim piece surrounding the awesome Charger “race track” tail light design, black stripes on the hood, the black “bumble bee stripe” across the back end, and unique black pocketed 20” aluminum wheels (these wheels are different from the black pocketed wheels found on the non-Super Bee Charger SRT8 models).

As mentioned above, the 2012 Charger SRT8 Super Bee is also available in Pitch Black instead of Stinger Yellow and where the bright yellow models sport the black trim, the Pitch Black Super Bees receive charcoal trim (the rear stripe and hood stripe). While we certainly understand the desire to have a sleek, high performance sedan looking all sinister in black, I would hope that most 2012 Super Bee buyers would opt for the far more attractive Stinger Yellow models. As an interesting aspect to the 2012 Super Bee, while non-Super Bee Charger SRT8 models have a huge blacked out grille opening that incorporates a portion of the front fascia across the middle, the Super Bee model has the Stinger Yellow bumper splitting the upper and lower grille portions – a move that is likely to sit well with those who don’t care for the huge black “nose” of the standard Charger SRT8.

On the inside, the 2012 Dodge Charger SRT8 Super Bee packs more unique trim with Stinger Yellow and silver accents throughout with the well known Super Bee logo embroidered on the headrests. This Super Bee logo is also represented on the vehicle information center display and all 2012 Super Bee models will receive a special dash plaque pointing out the uniqueness of this limited edition high performance sedan.

The most important features of the 2012 Dodge Charger SRT8 Super Bee are what makes this brawny sedan so muscular – and that begins with the same 6.4L, 392 cubic inch Hemi V8 found in the non-Super Bee Charger SRT8. Thumping out 470 horsepower and 470lb-ft of torque, the Charger SRT8 is one of the most powerful sedans in the world and thanks to the dual mode suspension system – it is also one of the best handling. Brembo brakes help to further improve the handling of the Super Bee and a set of high performance Goodyear tires help the Charger Super Bee launch, corner, and stop as well as just about any sedan in the world.

Stay tuned to TorqueNews.com as we continue to bring you the best and brightest of the ongoing 2012 Detroit Auto Show!