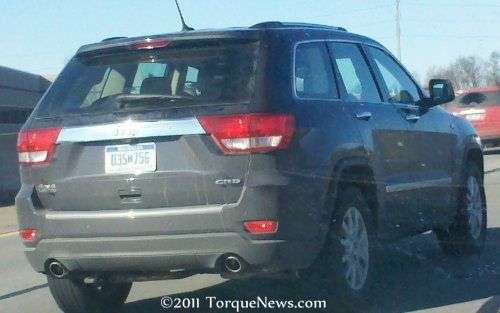 The Chrysler Group announced today that they will be adding a third shift at their Jefferson North Assembly Plant (JNAP) next year – a move that will create around 1,100 jobs and at the same time, Chrysler confirmed that there will be a diesel-powered version of the Jeep Grand Cherokee built in Detroit alongside the current Grand Cherokee, the Dodge Durango and the new Maserati Kubang SUV.
Advertisement

Chrysler’s Jefferson North Assembly Plant is already one of the company’s busiest plants, operating at full capacity with two shifts to keep up with the incredible demand for the Jeep Grand Cherokee and the Dodge Durango. Within the next year, JNAP will also begin building the new Maserati Kubang, a new high end luxury SUV based on the same platform as the other two JNAP utes and for 2013, the Jeep Grand Cherokee Diesel models will continue to keep the plant workers at Jefferson North busy. The 1,100 jobs created as part of this expansion will help to man the upcoming third shift while also allowing the workers an additional 49 days off per year without the factory being short staffed.

The decision to increase production at JNAP to meet the increased demand of the Jeep Grand Cherokee and Dodge Durango is part of the Chrysler Group’s commitment to help get the city of Detroit back to its automaking prominence. These 1,100 new workers who will build sport utility vehicles join the 150 new jobs created by the re-opening of Chrysler’s Conner Avenue plant – where the next generation Dodge-er-SRT Viper will be built.

“Our future, like the history of our brands, is interwoven with the City of Detroit,” said Chrysler Group Chairman and CEO Sergio Marchionne. “Detroit long has been home to renowned innovators and craftsmen. So it is in the Motor City, home of our industrial heritage and a resilient people, that we are entrusting the manufacture not only of the ultimate American sports car, the SRT Viper, and the Jeep Grand Cherokee – the most awarded SUV ever – but also a diesel version of the Jeep Grand Cherokee for North American markets. We believe that investing in Detroit is not only the right thing to do, but it is a smart thing to do as we work to write the next chapter in our shared history.”

The Chrysler Group’s announcement this today did not give a timeline as to exactly when JNAP would begin hiring this third shift or when the plant will begin running the third shift but with the Maserati Kubang planned to meet production sometime this year and the Jeep Grand Cherokee Diesel slated to join the lineup “next year”, we would expect that the hiring process will commence before the end of this year. JNAP currently employs around 2,890 workers across the two shifts currently building the Jeep and Dodge SUVs.

On the other hand, workers tasked with building the next generation SRT Viper will report for training and orientation at the Connor Avenue plant in the fall of 2012, with the first models expected to hit the street before the end of the calendar year as a 2013 model year vehicle.

The Jeep Grand Cherokee Diesel is expected to join the lineup in 2013 (it is unclear whether it will be a 2013 or 2014 model year vehicle) after a hiatus since last being available stateside in 2008. While many who have been pleading for a diesel powered Grand Cherokee do so because they are after the massive torque output of the diesel engine, Chrysler plans on the new diesel Jeep helping the company improve their overall fuel economy ratings. Chrysler has been testing these diesel Jeeps in the area for some time and yours truly has caught them on film – shown on the right sporting the CRD (common rail diesel) logos on the rear gate.

It is expect that when the 2012 North American International Auto Show opens next week in Detroit’s Cobo Hall, the Maserati Kubang will make its grand debut alongside its American cousins. With any luck, Chrysler will surprise us all and roll out a concept version of the diesel powered Jeep for torque-lovers to drool over. TorqueNews.com will be covering the 2012 NAIAS, bringing you all of the top debuts and most exciting concepts from the Motor City show!