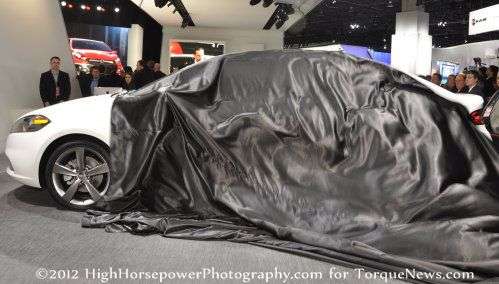 The compact sedan market has become one of the most vital vehicle classes to the automakers doing business in North America and with the introduction of the 2013 Dodge Dart, the Chrysler Group will finally have a car that could be a major player in that segment – with a price of $15,995 making it less expensive than the bestselling models in that class.
Advertisement

There was a point in time where the American compact sedans carried a reputation of being unexciting, uninspiring and cheap in their build quality but over the past few years, the Big 3 have worked to improve that perception and the 2013 Dodge Dart is a fine example of those efforts. When the Chrysler Group last had a competitive C segment sedan, it was the Dodge Neon (also badged as a Chrysler and Plymouth Neon) and while it was very popular and very inexpensive, the entry level trimlines of the Neon was all about getting from point A to point B as efficiently as possible. However, with the introduction of the 2013 Dart – owning an entry level Dodge compact sedan no longer means that you’re stuck with brutal vinyl seats, a rubber/plastic dash and a tape deck. The new Dart will come in a five trimlines when it goes on sale in the second quarter of 2012, including the SE, SXT, Rallye, Limited and R/T with 12 exterior colors, 14 interior colors, 3 engine options and 3 transmission choices – along with all of the goodies and gadgets (like an 8.4” touch screen) that the American consumer has come to expect from the redefined C segment sedan. Most importantly, all of this will be available starting at just $15,995, making the new Dart less expensive than the Ford Focus, the Chevrolet Cruze and the Hyundai Elantra.

In addition to the sharp exterior styling and sporty interior design, one of the key aspects to the success of the 2013 Dodge Dart will be the engine lineup featuring three 4-cylinder mills that combine power and efficiency. The base engine for the new Dart is the 2.0L Tigershark engine that packs 160 horsepower and 145lb-ft of torque, with this engine serving as the standard mill in the Dart SE, SXT, Rallye and Limited models. Next in line is the 1.4L MultiAir Turbo engine that delivers 160 horsepower and 184lb-ft of torque so while this boosted motor offers the same horsepower as the entry level engine, it offers a whole lot more torque and with the use of forced induction technology, it should offer better fuel economy than the entry level 2.0L engine. Finally, the 2.4L Tigershark engine featuring Fiat’s MultiAir2 induction technology serves as the most powerful mill in the lineup – packing 184 horsepower and 171lb-ft of torque. Dodge has not specified which engine will serve as the standard feature for the Dart R/T but both the 1.4L Turbo and the 2.4L Tigershark would both do a fine job of giving the Road and Track trimline some kick. Also, the 1.4L and 2.4L options give the Dart quite a bit more power than the Ford Focus and Chevy Cruze while the entry level 2.0L mill offers similar power to the new Focus. The standard transmission with all three engine options is a proper 6-speed manual and those who don’t want to do their own shifting with the two Tigershark engines can opt for a 6-speed automatic while 1.4L Turbo Dart owners can select a unique dual clutch transmission.

Check out the gallery on the right for a closer look at the sporty new 2013 Dodge Dart in its R/T trim and stay tuned to TorqueNews.com for all of your 2012 Detroit Auto Show news!

Frank Sherosky wrote on January 9, 2012 - 6:30pm Permalink
I was surprised at the size of the Dodge Dart. It is bigger than I anticipated, in a good way!