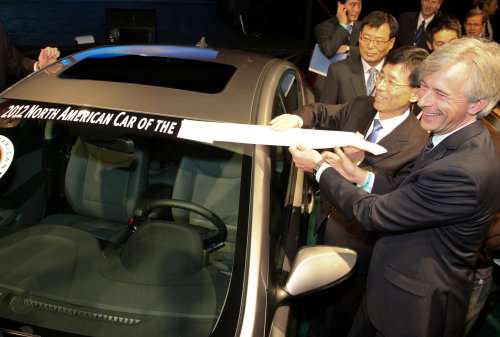 Hyundai vs Ford: Hyundai Elantra Takes Car of the Year in Detroit

Hyundai's Elantra won the 2012 North American International Auto Show Car of the Year award in Detroit, beating out the Ford Focus and Volkswagen Passat. This marks Hyundai's second win of the title, both times in an upset on Ford's home turf.
Advertisement

In fact, the 2012 competition was almost a rehash of the 2009 NAIAS Car of the Year which pitted the Hyundai Genesis, Ford Flex, and VW Jetta TDI with Korea again coming out on top. The Elantra, however, is a deserving winner, though the competition was definitely fierce.

In the extremely competitive small and compact car segment, Hyundai-Kia is one of the more aggressive brands. The Elantra's sales in 2011 jumped 41% as part of the company's overall 20% sales gain despite the sluggish economy.

The 50 jurors on the awards panel, all U.S. and Canadian automotive journalists, looked at vehicles that were either “all new” or “substantially changed” from any previous model. Hyundai's Elantra enjoyed a near-complete makeover thanks to the company's new California-based design studio, which was definitely an element in its victory in Detroit today.

The car's exterior sees an almost complete re-design, dumping its previous blend-in looks for a more sporty, fluid appearance with a coupe-style roof line. Under the skin, the Elantra's 1.8-liter engine delivers better performance (148hp, 145hp in California) and economy (EPA 33mpg combined) with Hyundai's new Active Eco, driver-selectable drive system. This adjusts shift points and throttle position to emphasize economy over power. Fuel economy increases up to 7% are possible and the Active Eco is standard on all automatic transmission-equipped Elantras.

Behind the wheel, a bold dash design and easy-to-use controls emphasize the car's new style without harming its everyday ease-of-use. Contrary to the company's (sometimes deserved) reputation, the interior cabin materials aren't low quality and the car has upgrade options that put it in competition with some of the most well-known entry-level luxury vehicles.

Finally, the Elantra scored well in Insurance Institute of Highway Safety crash tests and includes a host of standard safety equipment and features. These include anti-lock disc brakes, active front head restraints, front and side impact airbags in front and electronic traction and stability control.

Overall, the Hyundai Elantra was a good choice for the win as this year's NAIAS Car of the Year pick. It proves two things: even in a heated competition against some very strong rivals, and despite a model brand that has had lackluster interest from the market, a strong showing can be made with concerted effort. In the end, it came out on top of 17 other cars initially considered for the award and followed through with a win over Ford, its strongest contender in Detroit.