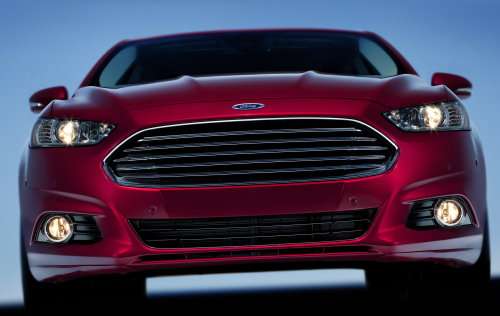 Ford refines the midsized segment with the all-new 2013 Fusion

Later today in Joe Louis Arena in Detroit as part of the 2012 North American International Auto Show, Ford Motor Company will unveil the entirely-new 2013 Ford Fusion - a car that will raise the bar for the midsized sedan segment with a level of luxury and fuel economy that has never before been seen in this segment.
Advertisement

Since being introduced a in 2006, the Ford Fusion has been one of Ford Motor Company’s bestselling models with over 225,000 sold in the 2011 year but with the midsized sedan segment offering such tight competition, Ford set out to build a next generation Fusion that would change how the American consumer looks at this affordable segment. Like the currently available Ford Fusion, the 2013 Fusion will offer a variety of traditional gasoline engines and a hybrid drivetrain along with the new Fusion Energi – a plug-in hybrid expected to offer better than 100MPGe.

On the outside, the 2013 Ford Fusion sports design cues previously seen on the Ford Evos Concept with a larger silhouette and appointments that provide for a much more upscale look than the midsize market has been known for over the past decade. The 2013 Ford Fusion looks more like a luxury car than an affordable midsized sedan thanks to the sharp exterior design, the refined interior and a variety of amenities like an advanced all wheel drive system, adaptive cruise control, a lane keeping system, active park assist and Ford’s Blind Spot Information System close the gap between luxury and affordable. The segment in which the Ford Fusion competes has become more about how much you get for your money and with the introduction of the 2013 Fusion – Ford looks to offer more for the money than any other midsized sedan on the market.

“Our vision for Fusion was clear – deliver the very best of what ‘One Ford’ stands for,” said Derrick Kuzak, group vice president of Global Product Development. “We brought our global teams together around a blank slate with the charge to develop a midsize car with ground- breaking design and jaw-dropping fuel economy – one that featured technologies to help make our customers safer and better drivers. This car is the result.”

While gadgetry and great looks are nice, the biggest news for the new 2013 Ford Fusion is under the hood as the Fusion comes in three different forms with a total of 5 different engine options across the initial 2013 lineup. The next generation Fusion will continue to feature all wheel drive on the premium non-hybrid models along with front wheel drive throughout the rest of the lineup and while the majority of 2013 Fusion models will come fitted with a 6-speed automatic transmission, there is also a manual transmission option coming for 2013.

The basic gasoline-powered (non-hybrid) 2013 Ford Fusion offers three engines, beginning with a 2.5L 4-cylinder that is expected to offer 170 horsepower and 170lb-ft of torque. This engine will only be available with a front wheel drive configuration and a 6-speed automatic transmission.

Next in line for the 2013 Fusion is the 1.6L EcoBoost 4-cylinder, offering around 179 horsepower and 172lb-ft of torque. Like the naturally aspirated 2.5L engine, the 1.6L EcoBoost is only available with a front wheel drive layout but this EcoBoost engine option benefits from a 6-speed manual transmission that helps boost fuel economy. The standard 6-speed automatic transmission from the entry level 2012 Fusion is also available. We can expect this 1.6L EcoBoost to offer slightly more power than the entry level 2.5L 4-cylinder but with better fuel economy measures than the 2.5. This engine is expect to deliver the best fuel economy in the class among non-hybrid models with 26mpg around town and 37mpg on the open road. This engine will also feature a stop-start system to help improve fuel economy – making it the first automatic transmission model from Ford to feature this technology.

Finally, the 2013 Ford Fusion features the 2.0L EcoBoost 4-cylinder – packing 237 horsepower and 250lb-ft of torque. This engine option is only available with the 6-speed automatic transmission although unlike the other two gasoline engines; buyers of the 2013 Fusion with the 2.0L EcoBoost can opt for all wheel drive. One bit of good news for those who want a little more shifting fun out of their 2.0L EcoBoost 2013 Fusion – these models will also be equipped with Ford’s SelectShift manual shift input featuring new paddle shifters.

The 2013 Ford Fusion Hybrid features a new 2.0L Atkinson cycle 4-cylinder engine and even though this new engine is 20% smaller than the previous Fusion Hybrid engine, Ford promises that there will be no decline in performance with projected figures of 185 horsepower and 130lb-ft of torque. More importantly, this revised Fusion Hybrid is expected to offer best in class fuel economy figures of 47mpg around town and 44mpg on the highway. For comparison, the current Toyota Camry Hybrid offers 43mpg around town and 39mpg on the highway so the 2013 Fusion Hybrid stands to best the Camry Hybrid by 4 and 5 miles per gallon in the given environment. Also, thanks to advancements in the hybrid drivetrain, the 2013 Fusion will be able to hit a top speed of 62 miles per hour strictly on battery power – an increase of 15 miles per hour over the current Fusion Hybrid’s limit.

The Fusion midsized sedan has become one of the bestselling vehicles in the US market and with over 225,000 units sold in 2011 – it is Ford’s top selling car. The 2013 Ford Fusion looks better in every way compared to the current Fusion with more amenities, improved/more efficient drivetrain options and a sleek new look…the 2013 Fusion could help Ford strive to offer the bestselling car in the entire American auto industry.

Ford Love wrote on January 9, 2012 - 7:55am Permalink
Very nice looking car. Ford has been lately stressing beauty and this is a good exemplification of the company's policy. This is why I really liked the title in one of the Birtish newspapers on the 2013 Fusion. It was titled "New Ford Fusion a poor man's Aston?" Indeed, it looks like a luxury sports sedan.
BUD wrote on January 11, 2012 - 2:32pm Permalink
WOULD BE PERFECT FOR ME IF ONLY IT CAME AS A 5 DR LIFTBACK. BEAUTIFUL CAR.