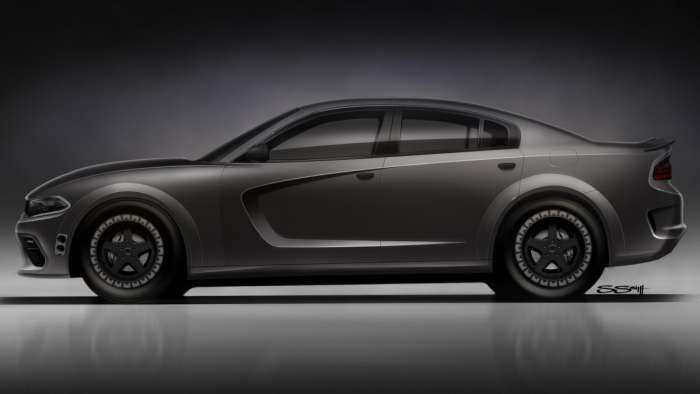 Speedkore has built a 2020 Dodge Charger SRT Hellcat Widebody for the SEMA Show with a carbon fiber body, all-wheel-drive and a twin turbocharged Hemi.
Advertisement

The SEMA Show in Las Vegas is almost a month away, but we are already getting an early look at some of the incredible machines that will be on display, including the 2020 Dodge Charger SRT Hellcat Widebody built by Speedkore. Speedkore has become well-known in the modern Mopar world for their involvement with what has become the world’s quickest Dodge Challenger SRT Demon, having crafted the carbon fiber body for that insanely-quick muscle car.

For the 2019 SEMA Show, Speedkore has created a carbon fiber-bodied 2020 Dodge Charger SRT Hellcat Widebody, but this built didn’t stop at the lightweight skin. It also features a custom twin turbocharged “Demon-based” Hemi engine and an all-wheel-drive system that makes the most of all of that power.

Speedkore’s Charger Hellcat Widebody
Only the basic details of the 2020 Dodge Charger SRT Hellcat Widebody shown above have been announced, as the built team wants to save something for the actual debut of this car. It will be formally introduced around 10 a.m. on Tuesday, November 5th at the Magnaflow booth in the Las Vegas Convention Center, but right now, we have some basic details on the Charger which has quickly become the most talked-about car on social media.

Speedkore is known for their stunning carbon fiber body panels, so it should come as no surprise that this 2020 Dodge Charger SRT Hellcat Widebody has had its entire skin converted to carbon fiber. Based on the sole rendering offered ahead of time, it looks like the production lines will be followed completely, but the body will weigh less than the factory metal skin. We have included a picture of a Hellcat Charger Widebody in Go Mango for comparison. 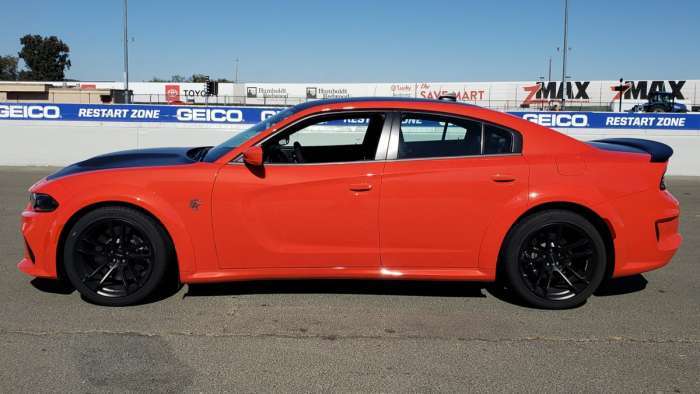 The one key difference with the body is that there is a set of exhaust ports poking through the front fender. These are attached to the exhaust side of the twin turbochargers, which have replaced the supercharger of what the press release calls a “Demon-based engine”. Since it is nearly impossible to actually get a Demon engine, we imagine that it is actually a Hellcat Redeye engine, but since the shop also got ahold of a not-yet-released widebody Charger, perhaps they really do have a Demon engine.

In any case, this 2020 Charger is powered by a 6.2-liter Hemi with a custom twin turbo setup that we would expect to yield better than a thousand horsepower. We don’t know what is being used for a transmission, but we do know that this car will feature all-wheel-drive. We imagine that the team used an 8-speed automatic transmission and the all-wheel-drive bits from a Jeep Trackhawk, but we don’t know for sure. I am most interested in seeing how they fit the all-wheel-drive parts under the Charger without causing the car to sit very high, as all-wheel-drive is nice until you have air lifting the front of the car at high speeds.

Finally, where Magnaflow comes into the equation is in the form of the trick exhaust system. As mentioned above, the twin turbos can vent through ports in the front fender, but that is designed for track use. When on the street, a system of valves sends the exhaust gases through a custom Magnaflow system.

Again, this is all that we know about the Speedkore 2020 Dodge Charger SRT Hellcat Widebody that is coming to SEMA, but with the big event less than a month away, we will know more soon.

Tesla-Funded Research Reveals One of The Biggest Mysteries of EV Battery
Tesla Tesla Buyer Nets a Whopping $12,000 Discount After Asking for Reduction
END_OF_DOCUMENT_TOKEN_TO_BE_REPLACED