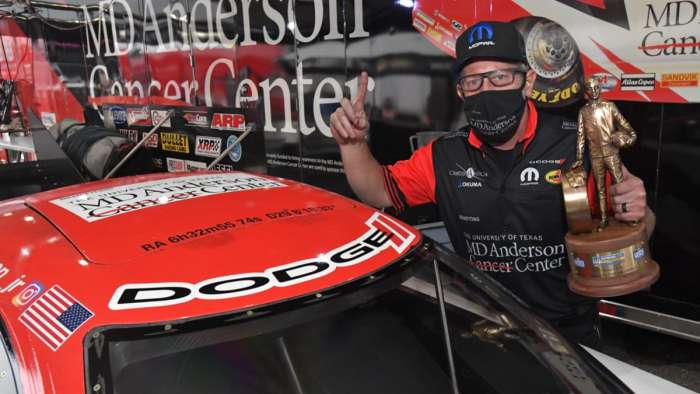 The Don Schumacher Racing Dodge Charger SRT Hellcat funny cars are dominating their class and at the second-to-last race of the shortened 2020 season, Tommy Johnson Jr. continued the team’s winning streak, setting up a three-driver shootout for the championship at the final race of the season.
Advertisement

Don Schumacher Racing came into the Mopar Express Lane NHRA SpringNationals in Houston with all four of their Dodge Charger SRT Hellcat funny car drivers in contention for the 2020 championship. Coming into the SpringNationals, a DSR Charger funny car had won the last 12 races, dating back to the end of the 2019 season. As a result, Matt Hagan, Jack Beckman, Tommy Johnson Jr. and Ron Capps all had a shot at the title with two races left.

Now that there is only one race left, Ron Capps has fallen from contention, even though he was the runner-up at the SpringNationals. Meanwhile, with his third win of the season, Tommy Johnson Jr. has moved into second spot in the championship race, just 42 points back of Matt Hagan. Meanwhile, Jack Beckman sits third, just one point behind Johnson, setting up a three-driver shootout this weekend in Las Vegas. 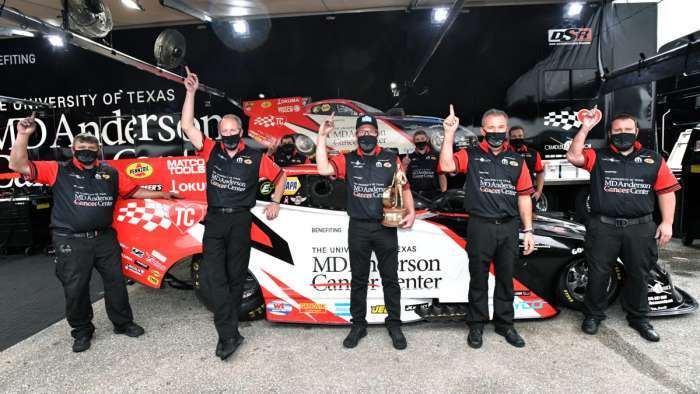 Johnson Wins the SpringNationals
The DSR Dodge Charger SRT Hellcat funny car drivers came into the SpringNationals with their eyes on the prize, but things didn’t start off well for the whole team. Jack Beckman qualified in the top spot, Matt Hagan qualified second and Tommy Johnson Jr. qualified sixth. However, Ron Capps ran into traction problems on both qualifying runs, turning in a time that put him in the 16th and final spot.

The semifinals included Alexis DeJoria, who took on Capps and lost in a race where both cars ran into problems. In the other semifinal run, Hagan grabbed the holeshot lead on Johnson, but Johnson drove around him on the big end to take the win. 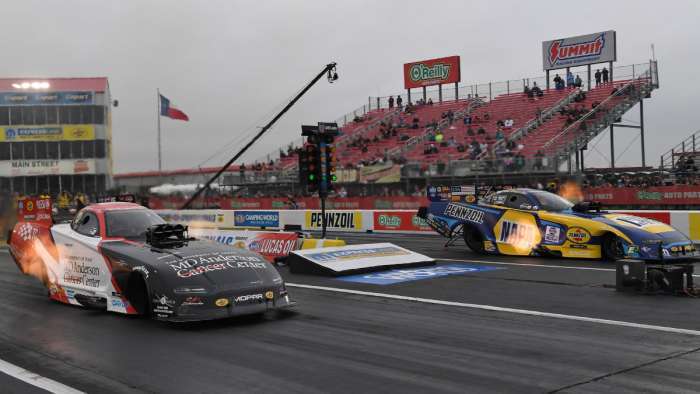 In the finals, Tommy Johnson Jr. once again watched his opponent – this time Ron Capps – jump out to an early lead with a better reaction time. Once again, Johnson laid down the better run, taking the win on the top end, turning his quickest run of the event with a 3.929 at 321.04 miles per hour.

The Championship Race
The last race in the 2020 Camping World Drag Racing Series is the Dodge NHRA Finals in Las Vegas. Ron Capps is currently 4th in points, 163 behind the leader, so he is mathematically eliminated. This means that only Tommy Johnson Jr. (42 points back) and Jack Beckman (43 points back) have a chance of catching Matt Hagan in the final race. 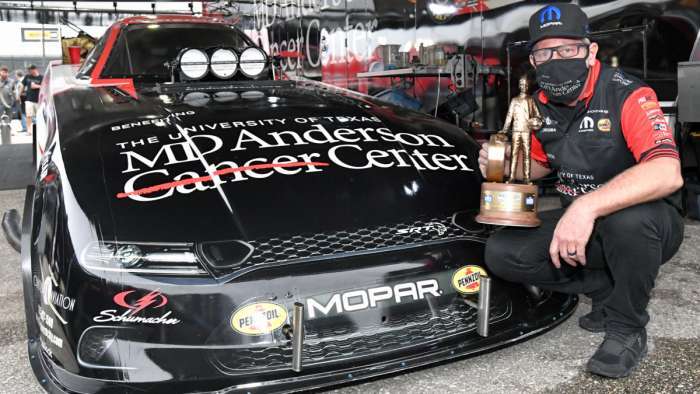 If Hagan can qualify well and go a few rounds in Vegas, he will score enough points to claim the title, even if Johnson or Beckman win the race. Realistically, Johnson and Beckman need Hagan to lose in the first or second round, as third-round-loss points should be enough for Hagan to lock up the 2020 NHRA championship.