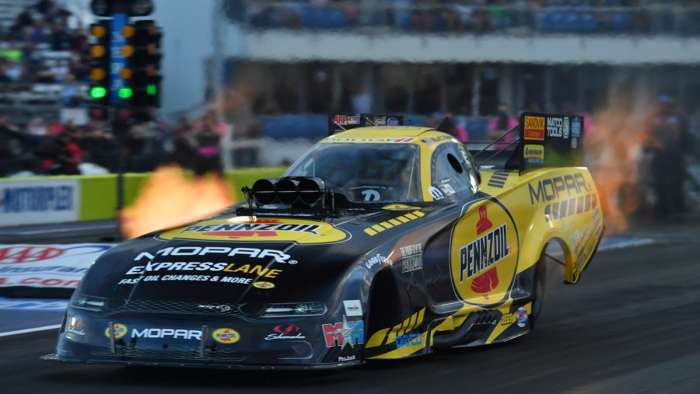 Jack Beckman won this past weekend at the AAA Texas Fallnationals, extending the unbeaten season for the Don Schumacher Racing Dodge Charger funny cars and helping to further-improve the chances of a Mopar driver winning the 2020 NHRA Funny Car Championship.
Advertisement

The Covid-19 pandemic has had a painful impact on the 2020 NHRA season, but things couldn’t be going any better for the Dodge Charger SRT Hellcat funny car drivers from Don Schumacher Racing. The NHRA has had to cancel more than half of the events, leading to the removal of the shootout-style championship race at the end of the season. The shortened season led to a dispute with series sponsor Mello Yello (and parent company Coca Cola), leading to a lawsuit that eventually saw Camping World emerge as the series title sponsor.

The impact on the funny car class was that John Force Racing dropped out after the pandemic break, citing financial concerns stemming from an inability to meet sponsor dealers with the shortened schedule. John Force Racing is one of the dominating forces in the funny car class with their quick Camaro race cars, serving as the rivals for the Don Schumacher Racing Dodge Charger race cars. JRF got off to a rough start this season, but it was still a crushing blow to the sport when Force and his team decided to sit out the rest of the season.

Having Force step away for the season with both his funny car and top fuel teams was bad for the NHRA, but it was good news for Don Schumacher Racing. John Force and Robert Hight have been the top competition for the DSR Charger drivers, so when John Force Racing announced that they wouldn’t compete anymore this season, it gave the Mopar funny car drivers a clear line to the championship. 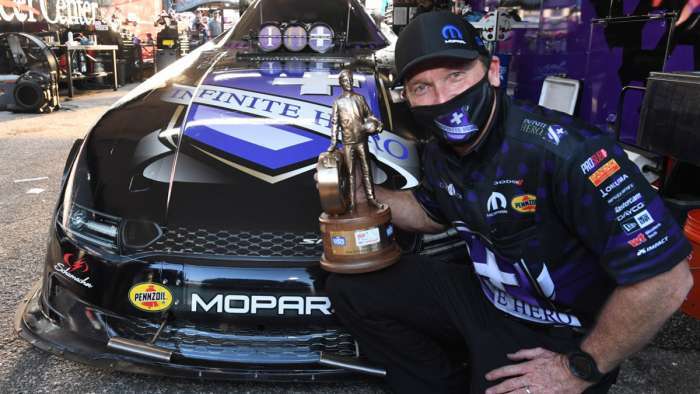 They have taken advantage of the lack of competition, winning every single event this season, all-but-guaranteeing that one of the DSR drivers will win the 2020 NHRA Funny Car Championship.

All four of the DSR Dodge Charger funny car drivers won in round one, but J.R. Todd’s Toyota was the quickest car in the class with a 3.881. Hagan was the second-quickest with a 3.885, and those two squared off in the 2nd round. Hagan beat Todd on the tree and turned a quicker time, securing his place in the semifinals. Capps made short work of Alexis DeJoria and Beckman beat Tim Wilkerson’s Mustang to also advance to the semis. Unfortunately, #2 qualifier Johnson ran into troubles and lost to Bob Tasca III, so there was one Mustang and three Chargers in the semifinals.

In that round of four, Hagan beat Capps in an amazing side-by-side drag race while Beckman came from behind to beat Tasca, setting up yet another all-Mopar funny car final round. This marked the 6th time in 9 events where two Dodge Chargers battled for the funny car win.

Season Standings
After the 9th of 11 races planned for the 2020 NHRA schedule, Matt Hagan leads with 762 points. Jack Beckman is in 2nd place, 4 points back of Hagan. Tommy Johnson Jr. is 3rd, 77 points out of first and Ron Capps is 4th, 174 behind Hagan.

The first non-Dodge drivers in the 2020 funny car standings are Mustang drivers Tim Wilkerson and Bob Tasca III, who are each 224 points behind Matt Hagan. There are two events left in the shortened 2020 NHRA season. If Hagan and the other Dodge drivers all qualify poorly and lose in the first round, they would each earn 21 points. That means that Hagan is practically guaranteed 42 points to end the season. When you add 42 to the 224-point lead over the Mustang drivers, you get a gap of 266 points. 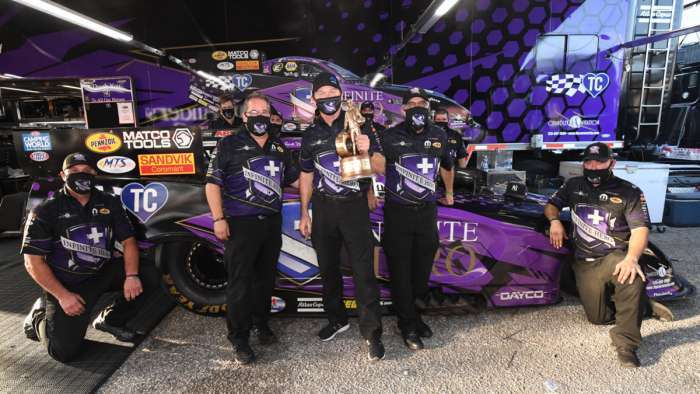 The next event will award 100 points to the class winner and the final event awards 150 points to the class winner. Drivers can also earn 3 points for being the quickest in each round along with earning as much as 8 points during qualifying. If either Wilkerson or Tasca were able to qualify first and win the next event, having run the quickest time in every round, the driver in question would score 120 points. If that same driver qualified first in the final event and won the class, having run the quickest ET in every round, he would be awarded 176 points. If the same driver achieves both of those amazing event criteria, he would beat Matt Hagan and the other Dodge Charger drivers.

That being said, neither of the Mustang drivers have qualified in the top spot this year, nor have either of them won an event. In other words, Wilkerson and Tasca face a relatively impossible feat and if they don’t succeed, one of the Don Schumacher Racing Dodge Charger SRT Hellcat funny car drivers will win the 2020 NHRA title.Matt Hagan Dodge Charger SRT Hellcat Funny Car