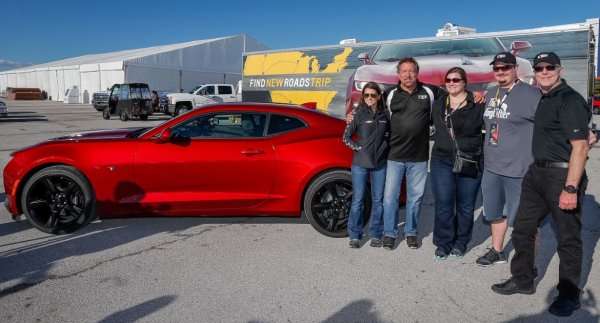 This past weekend, NASCAR driver Danica Patrick delivered the first 2016 Chevrolet Camaro sold via the retail process to a very lucky owner in Texas, as Alican “Turk” Boyacioglu officially became the first person in America to own a next generation Camaro.
Advertisement

We knew that it was coming, but on Saturday, the arrival of the 2016 Chevrolet Camaro officially began. The very first retail Camaro was sold and delivered in Texas as part of the Find New Roads road trip campaign and rather than just having the first owner of the 6th gen Camaro pick it up at his local dealership, the owner was treated to a truly unique delivery process that makes his Camaro experience that much more memorable.

The 1st New Camaro
The 2016 Chevrolet Camaro which was officially the first delivered in the world was ordered by Mr. Alican “Turk” Boyacioglu from Huffines Chevrolet in Lewisville, Texas. Turk had been tracking the build process and he was excited to learn that as the first new Camaro owner, he would be part of a special delivery event at the Texas Motor Speedway leg of the Find New Roads rolling campaign.

He arrived at the track this past Saturday expecting to pick up his 2016 Camaro SS, but imagine his surprise when his new muscle car rolled up with NASCAR and Indy driver Danica Patrick behind the wheel. Miss Patrick hopped out and handed Turk the keys to his new Camaro. Turk also got to meet a handful of GM execs, including Camaro Chief Engineer Al Oppenheiser and Camaro Design Director Tom Peters.

Of course, after meeting these Chevrolet celebrities and being handed the keys to his stunning deep metallic red 2016 Camaro SS, Turk jumped in the car and sped off into the sunset as the very first person in the world to drive their very own 6th generation Camaro.

“This whole experience was surreal,” Boyacioglu said. “Coming to the race and getting the VIP treatment was amazing, and I still can't believe I get to drive the first 2016 Camaro away.”

More on the Way
Along Alican “Turk” Boyacioglu receiving his 2016 Camaro SS from Huffines Chevrolet, there are thosuands more new Camaros headed to dealerships around the country right now. In fact, as you are reading this, there are Camaro owners eagerly checking with their own local dealership to see if their new muscle car has arrived. If you placed an early order for the Camaro coupe in SS trim with the standard V8 engine or LT trim with the V6 engine, your Camaro should arrive in the next few months, but as soon as this week.

Those folks who are waiting for the 2016 Camaro convertible or the Camaro coupe with the new turbocharged 4-cylinder engine, you have a few more months to wait, as GM expects to begin delivering the drop-tops and 4-cylinder models early in 2016.
However, racers be warned – the 2016 Camaro is officially here.