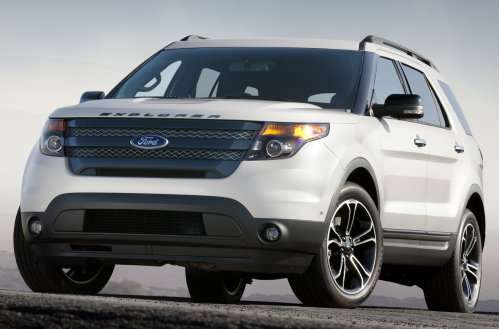 A closer look at the new 2013 Ford Explorer Sport

Yesterday we brought you the announcement of the 2013 Ford Explorer Sport and today, we take a closer look at the amenities that enhance the new Explorer Sport over the non-performance oriented models in addition to the EcoBoost engine around which the package is based.
Advertisement

The 2013 Ford Explorer Sport begins with the 3.5L EcoBoost V6, using a twin turbocharged induction setup to send “at least” 350 horsepower to all four wheels via an advanced all wheel drive system. The exact power output has not been made official but with the same 3.5L EcoBoost making 365 horsepower and 350lb-ft of torque in the Taurus SHO while offering 365 horsepower and a whopping 420lb-ft of torque in the Ford F150 EcoBoost, the power output of the production Explorer Sport could be more than the 350 estimated by these early releases. We could also see the torque output of the Explorer Sport top the 400lb-ft mark when it hits showrooms later this year.

The 3.5L EcoBoost V6 is the biggest addition to the new Ford Explorer Sport but it is not the only addition in terms of performance modifications by any stretch. The six-speed SelectShift automatic transmission is mated to a set of paddle shifters mounted on the steering wheel to give the driver more control over the shifts of the sporty SUV and 3.16 to 1 final drive ratio helps to improve the acceleration of the full sized sport ute. More importantly, Ford expects that the Explorer Sport will get 16 miles per gallon around town and 22mpg on the open road even with the bigger gears – possibly making the Explorer Sport among the most efficient performance minded SUVs on the US market. “Upgrading to Sport specification enabled us to maintain the standards of traditional Explorer capability plus delivering the highest highway fuel efficiency among gasoline-engine-powered, high-performance, three-row SUVs,” said Carl Widmann, vehicle engineering manager.

Next, the Ford engineers looked to improve the handling of the Explorer Sport beginning with the new reinforced chassis that is stiffer for better cornering and launching. A solid mounted electric power assist steering (EPAS) system has been added for improved steering response and handling on and off the road while larger brakes help bring the large sport ute to a stop during stints of spirited driving. These larger brakes will also help it easier to bring the Explorer Sport to a stop when towing, with this performance package able to tow up to 5,000 pounds. Finally, the capabilities of the Explorer Sport are enhanced with a unique terrain management system with modes for sand, snow, deep mud and steep hills.

Finally, in addition to the improved performance features, the Ford Explorer Sport receives upgrades inside and out to enhance the look of this performance package. On the outside, the Explorer Sport features unique black and silver 20 inch wheels, black headlights, black taillights, a black roof rails, black exterior mirror caps and a black liftgate appliqué running across the middle. Across the front, there is a new front fascia with additional room for induction and engine cooling air via a low-gloss Sterling Gray mesh opening. The Explorer Sport will be available in Ruby Red Metallic Clearcoat, White Platinum Metallic Tri-Coat, Tuxedo Black Metallic and Ingot Silver Metallic when it begins rolling out of the Chicago Assembly Plant later this year.

Inside, the Ford Explorer Sport wears a dark charcoal leather with optional Sienna inserts for the seats. Contrasting stitching has been used to bolster the sporty look with the overall design cues borrowed from modern designers such Balenciaga and Prada according to Ford. The interior dressing is finished with a unique steering wheel, unique instrument and door panels, unique Sport floormats and illuminated scuff plates.

The Ford Explorer Sport package was a mainstay in the heydays of the fabled SUV but even in the absence of the V8 engine option, this new EcoBoost-powered Explorer Sport could be very competitive with the likes of the Dodge Durango R/T and the Hemi-powered Jeep Grand Cherokee when it arrives later this year.

LG's New EV Battery Plant Is a Welcome News for Tesla
Tesla Giga Berlin's New Hurdle: It's Not Only the Gov't, but Now Tesla Itself
END_OF_DOCUMENT_TOKEN_TO_BE_REPLACED