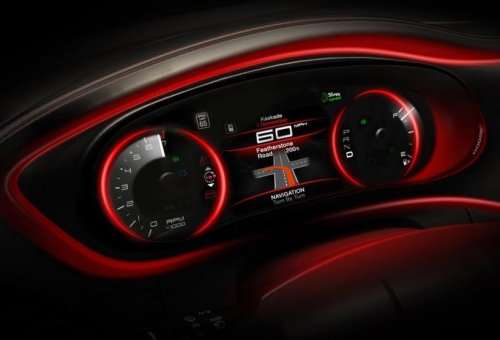 Detroit, MI - The stream of teasers from the Chrysler Group showing their new 2013 Dodge Dart continued this morning as the automaker offered up the first official look at the interior of the new C-segment sedan – giving a glimpse into the gauge cluster and infotainment area of the 2013 Dart.
Advertisement

The first new image of the 2013 Dodge Dart (presumably the same Dart R/T that was featured in the previous exterior teasers) provides us a look at the gauge cluster of the new sedan, making it instantly clear that Dodge is going for a very sporty, yet upscale design for the new Dart. The center section of the gauge cluster features a massive 7” Thin Film Transistor (TFT) screen flanked by a brightly lit tachometer on the left side and the PRNDL/fuel gauge on the right side. This area offers customization to meet the driver’s tastes and needs, with the image on the right showing the radio information at the top, a large digital speedometer in the middle and a clearly visible navigation screen at the bottom.

Running around the entire gauge cluster and flowing over to the center stack of the 2013 Dodge Dart is an available ambient light package – a popular feature in a variety of newer Ford products that I have loved in my various test vehicles. This ambient lighting package is also extended to the foot wells, door handles, map pockets, glove box, center console storage compartment and cup holders. While these tightly cropped images don’t provide much of a look at other areas, we can see what looks to be a soft-touch dash covering finished in leather and contrasting red stitching.

The second new teaser image of the 2013 Dodge Dart offers a look at the center stack, featuring an 8.4” touch screen (a class exclusive and one of the largest in the industry) and from this large screen, the driver and passenger can control just about every feature of the car’s interior. This includes the 2013 Dart sedan’s satellite radio, heated seats, climate control, navigation and Bluetooth phone controls, with the entire display wrapped in the available ambient lighting package.

That is where the new information on the 2013 Dodge Dart interior ends, but as a part of today’s announcement, Chrysler included a few new tidbits about the upcoming C-segment sedan. In an effort to push customization, the Dart will come with 12 exterior color choices, 14 interior color combinations, and six different wheel options in addition to the choice of three engine and three transmission options. Chrysler also stated today that their aftermarket Mopar division will have “hundreds of customization options and themed packages specifically developed for the Dart”, likely including goodies like Mopar catback exhaust, Katzkin leather seats, Mopar floormats and, with any luck, some more serious performance items for the new engine options.

The 2013 Dodge Dart will make its grand debut at the 2012 Detroit Auto Show when it opens on January 9th and TorqueNews will be at the show in force – bringing you the Dart and all of the other major debuts from the Motor City show! Check out the gallery on the right for a closer look at the 2013 Dodge Dart teasers by clicking any of the thumbnails, now including interior images!

Tudor wrote on December 13, 2011 - 2:08pm Permalink
Sooooo, it's not a Hatchback as the Giulietta it's based on. I guess I'm not buying one. I find Dodge and Chrysler sedans soooo boring looking, plain lines, no curves. It's too bad they're not using their European styling prowess learned from Fiat and Alfa. It's too bad. I was really looking forward to a Diesel Giulietta on our shores, at some point in the next two years and I'm looking to buy a car.
Altair wrote on December 14, 2011 - 8:22pm Permalink
Loving that gauge cluster, wish I could get a setup like that into my Dak.