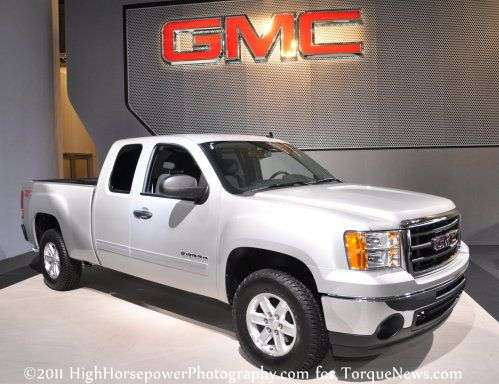 General Motors had another strong month in July 2011, posting an improvement in sales of 7.6% over July 2010 with their total of 214,915 vehicles making them America’s bestselling automaker group.
Advertisement

The American auto industry as a whole was down a bit compared to June but for the American automakers, July 2011 showed year over year improvements in General Motors was no exception. Their 7.6% improvement placed them 4th among major automotive groups behind Chrysler, BMW and Ford Motor Company but their 214,915 cars, trucks, vans and SUVs sold last month allowed GM to hold onto the title of being the top selling automaker in the US industry.

General Motors was lead in growth by GMC, with the official sponsor of the NFL improving by 36.4% as they sent out 37,918 news trucks and SUVs – making GMC the second largest GM brand in terms of sales volume behind only Chevrolet. Although it is one of the lower volume vehicles, the GMC Canyon was the top model in terms of growth with an improvement of 122.5% over last July. The GMC Terrain had a fantastic month, climbing by 92.8% as it moved 7,302 units and the Acadia SUV was third in growth with a jump of 87% over last July. The GMC Sierra pickup family was the top model in terms of volume with 12,596 trucks sold but the Acadia was close on its heels with 10,424 units sold while the compact Terrain was third in sales with 7,302 units sold.

The Chevrolet brand was next in line in terms of growth with an increase of 6.5% over last July and with 149,005 vehicles sold, Chevy was General Motors’ top brand in sales and the second overall in the American industry next to Ford. While the Chevy Cruze doesn’t have a growth rate compared to last year since the C segment vehicle wasn’t available a year ago, the Cruze had a tremendous amount of involvement in helping Chevrolet climb the charts. With 24,648 vehicles sold, the Cruze was the second bestselling Chevrolet/General Motors vehicle next to just the Silverado truck lineup as well as being the second bestselling car in the entire American auto industry for July 2011. For comparison, Chevrolet sold just 7,339 of the Chevy Cobalt last year – less than a third of the Cruze units sold last month even though the Cobalt offered more varieties tan the new Cruze. Chevrolet was lead in overall growth by the Equinox with a gain of 73.2%, followed by the compact Colorado pickup at 44.4% and the Traverse at 43.2%.

Buick was next in line in terms of growth with an improvement of 0.4% over July 2010 and that was due in great part to the success of the new Buick Regal. The German engineered Regal hit the market around this time last year and with 3,524 sedans sold, it saw a 106.9% improvement in July 2011. The Buick Enclave was the only other vehicle in the lineup to show positive growth with an improvement of 21.9% in moving 6,145 SUVs. Buick can soon expect to see their overall numbers grow as the compact Buick Verano gives the middle child brand a legitimate contender in the C segment.

Finally, the Cadillac brand struggled for the second month in a row with General Motors’ luxury brand showing a decline of 25.5% in July 2011 compared to the same month one year earlier. Unbelievably, every vehicle in the Cadillac lineup saw a negative growth in July 2011 with the biggest losses coming from those vehicles that are on the road to discontinuation – the DTS and STS. Both of these models are being removed from the lineup with the new XTS sedan set to replace two cars at once while the upcoming Cadillac ATS should give the GM luxury brand a good competitor to battle the likes of the BMW 3-Series (or 4-Series, as the case may be).

Other July 2011 Sales News:
Lincoln booms for Ford in July 2011
Chrysler leads in growth for July 2011 lead by Jeep
The Camaro outsells the Mustang, Challenger, 370Z in July 2011
The Nissan Leaf clubs the Chevy Volt in July 2011

AtlantaGMC wrote on August 4, 2011 - 2:30pm Permalink
Wow! That's fantastic news. Our dealership won the Mark Of Excellence award for 2010 from Chevrolet. Between that honor and the great sales for GM line of vehicles, it looks extremely promising for the American auto industry as a whole. These numbers are worth being excited about. That's for sure.
Peltier Chevrolet wrote on August 5, 2011 - 11:25am Permalink
The Chevy Cruze has been a popular choice in Lufkin Texas as well. The Chevy Silverado is always our best seller as people in East TX really love their trucks. With the cost of gas still high though the Cruze makes a great choice for fuel conscious drivers.
Anonymous wrote on August 20, 2011 - 9:57am Permalink
I bought one and it's the best car I've owned in a long time, and I've own many brands with Toyota being the worst car out of about half a dozen.