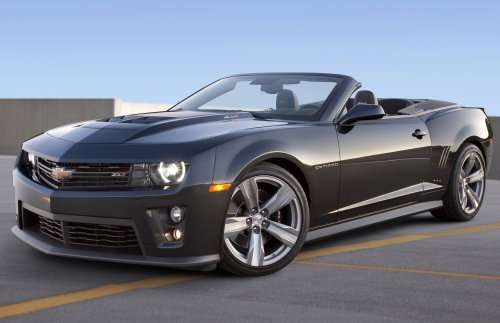 After leading the division in January and trailing the Ford Mustang in February, the Chevrolet Camaro battled back in March 2012 to claim the title of best selling muscle car for the month – beating the Mustang by a narrow margin of just 246 units.
Advertisement

Springtime always brings about an increase in performance cars and with an unseasonably warm February, that trend started early in 2012 with Ford and Chevrolet showing significant increases over February 2011. The upward trend continued in March 2012 but not in quite as grand form as each of the American muscle cars saw increases in the single digit range. However, single digit percentage increases are better than no percentage increases and more importantly - even with gas prices on the rise, American consumers aren’t shy away from these performance models with all three showing significant gains over February.

The Chevrolet Camaro did in March 2012 what it did most of 2011; and that is lead the muscle car segment in sales volume. With 9,292 Camaro coupes and convertibles sold, the Chevy sports car showed just a 3.7% gain compared to one year ago but with over 3,100 more Camaros sold in March 2012 than in February 2012, it looks like rising gas prices aren’t hitting the muscle car segment too hard. For the year, the Chevrolet Camaro leads the segment in total sales with 21,924 units sold during 2012 Q1, which is an increase of 9.8% compared to the first quarter of 2011.

The Ford Mustang came in second for March 2012 sales in the rear wheel drive performance car segment with 9,046 new models sold. This gives the Mustang an increase of 5.7% compared to March 2012 as well as showing a fair increase of almost 1,700 units sold over February 2012. Through the first quarter of 2012, the Ford Mustang has moved 20,133 units for an increase of an impressive 30.6% compared to Q1 2011 – also allowing the Mustang to be well within striking distance to take back the monthly and annual title of being the best selling muscle car in the US.

Last and technically least in terms of sales volume is the Dodge Challenger, which moved 4,304 units in March 2012. Unlike the other two Detroit muscle cars, the Challenger is without a droptop version or a supercar model like the Camaro ZL1 or Shelby GT500 but the brawny retro muscle car still does alright for itself. The 4,304 units sold in March account for an 8% improvement over the same month last year and with 10,524 units sold in the first quarter, the Challenger is selling at an 8% better rate than it did in 2011. Chrysler has repeatedly pointed out that they don’t care if the Challenger is outsold by the Mustang and Camaro so long as the car is headed in the right direction. With a steady increase over the past two years, the Challenger seems to be right on the path that Dodge and the SRT brand want to travel with their muscle car.