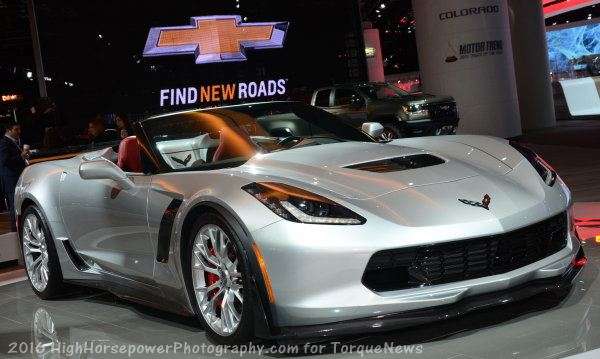 The Chevrolet Camaro fell short of beating the Ford Mustang in the 2015 muscle car sales race, but the Chevrolet Corvette had no problems running away with the title of America’s bestselling premium sports car once again – selling more than twice as many cars as the runner-up Lexus RC.
Advertisement

The Chevrolet Corvette Stingray was the top dog in premium sporty coupe sales in 2014 and with the arrival of the new Z06 for 2015, the Corvette continued its winning ways on the sales charts. Mind you, the C7 Corvette lineup will beat all of the other cars on our list in almost any real world race as well, but when it comes to sales numbers – nothing rivals the Corvette in the premium performance segment.

For those wondering, the vehicles on the list below are all offered exclusively as a 2-door coupe or convertible and they are all intended to be sporty cars. The performance levels vary a great deal, but these are the 13 bestselling models from premium brands or they are premium performance models from non-premium brands (Chevrolet Corvette, Dodge Viper). Basically, if you live in the US and you are looking to invest in a high end, high performance, 2-door vehicle – there is a good chance that the vehicles on your short list are included below. Also, this list does not include vehicles from companies who don’t break out all of their sales figures by model or by country.

Corvette Dominates Once Again
In 2015, General Motors sold 33,329 examples of the C7 Chevrolet Corvette Stingray and Z06 in coupe and convertible form. The 2nd, 3rd and 4th place cars on the list combined sold 31,548 units over the same period of time and that is why I am so quick to use the term “dominate”. Mind you, this is the same car that was "doomed to fail" because of the shape of the taillights.

Over the course of the past two years, I have often examined the sales figures of the Corvette compared to the Porsche 911 lineup, since the performance capabilities and prices are in the same general ballpark. Although the Lexus RC technically finished second in the running this year, some might point out that the RC has a fuel friendly 4-cylinder model in addition to the higher performance packages, but even in 4-cylinder form – the RC is still a premium sports coupe. That being said, the 911 is still the best comparison to the Corvette.

Porsche combines their sales figures, so the 911 and grouped in with the 918 hybrid supercar, but even with that in mind, the German automaker “only” sold 10,101 of those last year. The 911/918 was the company’s bestselling car, followed by the Boxster/Cayman (which ranks 4th on the premium performance coupe list) and the Panamera sedan and in total, Porsche sold 21,750 cars last year – and GM sold 33,329 Corvettes.

The Full Top 13
The Chevrolet Corvette crushed the competition in 2015, but it was a good year for a great many of the cars and companies on this list. Newcomers to the list for 2015 include the Lexus RC coupe (which saw strong enough sales levels to jump into the 2nd spot), the electric BMW i8 and the Mercedes Benz AMG GT.

As mentioned above, the Lexus RC finished 2nd, the Porsche 911/918 finished 3rd and the Porsche Boxster/Cayman finished 4th. The Infiniti Q60 saw a huge drop in sales, but it still managed to pull down the 5th spot while the electric BMW i8 and the BMW Z4 followed in 6th and 7th. The Mercedes Benz AMG GT was 8th in its first year on the list, the compact Audi TT was 9th and the Nissan GTR rounded out the top 10. Finally, the Dodge Viper, the Alfa Romeo 4C and Audi R8 rounded out the field in 11th, 12th and 13th.

The full list is available below, but for GM fans – the only spot that matters is the top spot.