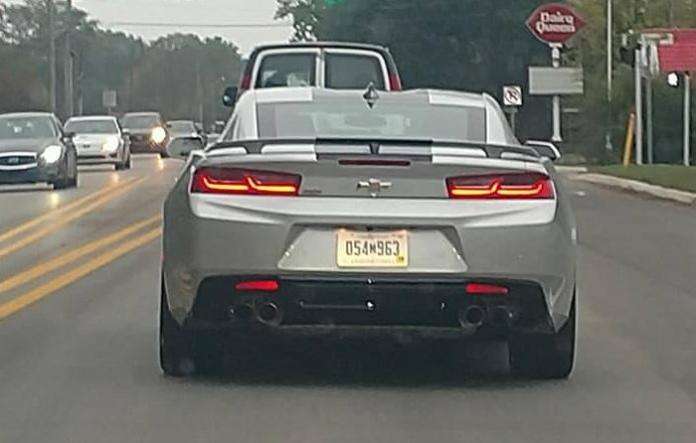 A Chevrolet Camaro SS test car driving near the GM Proving Grounds in Milford, Michigan sounded very much like it was fitted with the 10-speed automatic transmission from the Camaro ZL1, supporting rumors that the high volume SS package would be getting the new high tech gearbox.
Advertisement

The other day, I was driving through Milford, Michigan near the GM Proving Grounds when a 6th gen Chevrolet Camaro SS pulled onto the road in front of me. There are lots of test cars running around Milford and this one looked like every other newer Camaro test car, but it sounded very different. The engine sounded the same, but the driver was shifting a ton – far more than I was in the Hellcat Challenger that I was driving.

The rapid shifting leads me to believe that this Chevrolet Camaro SS test car was fitted with the new 10-speed gearbox from the Camaro ZL1. In speaking with some Camaro insiders, there are rumors that the 10-speed will soon be offered with the LT1 in the SS package and those insiders agreed that it could have been a drivetrain test mule with the new gearbox.

Accelerating and Decelerating with a Camaro SS Test Car
While driving through Milford in my 2017 Dodge Challenger SRT Hellcat, the silver Chevrolet Camaro SS test car in the image above pulled out from a side road in front of me. The people driving the test cars usually wont let them stretch their legs around other performance vehicles, but when I jumped into the throttle a bit, the Camaro driver returned the favor. Nothing crazy…just a little more spirited acceleration than normal driving, getting up to the speed limit a bit quicker than most drivers.

The Camaro SS sounded great, but running behind it, I could clearly hear the shifts under hard throttle and oddly, it was shifting quite a bit more than my Challenger. My Hellcat has the 8-speed automatic, as does the current production version of the Camaro SS, so even with slight differences in gearing, the two shift at fairly similar rates when accelerating up through the gears. However, the Camaro was shifting more as we accelerated and when we came to intersections, the car was most certainly shifting more as it decelerated. I was mostly in 4th gear as we approached stop lights and stop signs, causing me to downshift 3 times to get into 1st gear, but the Camaro was shifting 4-5 times as we slowed down. This comes after short stints of moderate acceleration leading to higher RPMs, so as we slowed rapidly for the intersection, the Camaro was dropping down through more gears than was my Hellcat.

Had this Camaro SS been fitted with the 8-speed automatic gearbox, it was have been at a much lower RPM when approaching in 5th or 6th gear, but the RPMs were not low. The LT1 was singing and the shifts were clear and crisp, leaving little doubt in my mind that this Camaro had a 10-speed transmission.

The 2018 Ford Mustang already has the 10-speed, which was developed jointly with General Motors, after the Camaro ZL1 was the first car to get this transmission. The first Ford product was the new Raptor, so it went Raptor, Camaro ZL1 and Mustang GT, and if the pattern continues, something from GM will be next.

Adding the 10-speed automatic to the Camaro SS makes perfect sense, as it will make the 455hp muscle car quicker and more efficient. There is really no reason not to introduce the 10-speed in the Camaro SS and maybe even the lower-line models with the turbo 4 or the V6, as that move will improve the car in every way.