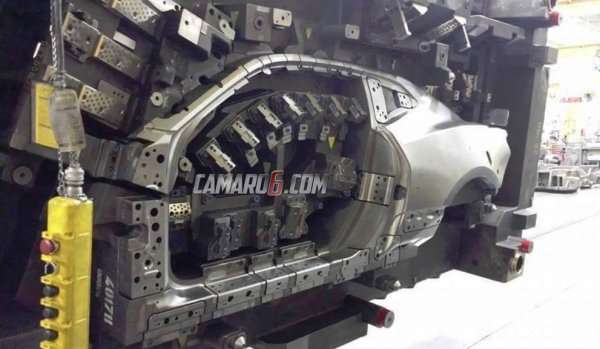 General Motors hasn’t given us much to talk about with regard to the 2016 Chevrolet Camaro, but the devout Chevy muscle car lovers at Camaro6 have gotten ahold of an image that gives us our best look yet at the basic profile and the rear quarter panel of the 6th gen car.
Advertisement

Before I get into talking about the image above from Camaro6, a quick rundown of how this stamping die for the 2016 Chevrolet Camaro has hit the internet. According to the post on the enthusiast site Camaro6.com, a guy who claims to have made the body side die for the next Camaro posted a picture of said die on Facebook during what appeared to be a fairly negative discussion about the 6 generation muscle car. That post was deleted, but a forum member from Camaro6 grabbed a screen shot and uploaded it to the forum – forever securing the image’s place in the cyber universe.

This quick thinking by the forum member to snag the shot off of Facebook has likely proven to be bad news for the guy who originally posted it, but it is good news for the rest of us who have been eagerly awaiting any chance to see the 2016 Camaro in the flesh. This isn’t in the flesh, but this is a shot of what appears to be the item that will create the skin of the 6th gen Camaro.

The 2016 Camaro Body Die
So, while there are plenty of critics who insist that this image is a fake, it looks very much to me to be the driver’s side body die for the 2016 Chevrolet Camaro. Large, flat pieces of steel will be crushed against this die with tons of force and the result will be a singular component that will serve as the skeleton for the cockpit and the rear quarter panel of the new Camaro.

This Definitely is Not a 2015 Camaro Die
Some of the folks insisting that this is not something used to create the 2016 Camaro believe that it is a die for a 5th gen (2010-2015) model. However, a quick comparison to the Camaro on sale at your local dealership today reveals a host of differences that make it clear that this is not a 5th gen Camaro die. First, the rear quarter window is higher relative to the body line which creates the “shoulder” of the form. Next it appears as though the rear pillar tapers in much further as it reaches the trunk, when compared to the current Camaro and it looks as though the taillight wraps around into the quarter panel a bit more – but those points can be disputed by the internet know-it-alls who question the validity of the image.

Based on those key points above, I believe that this is the best look we have gotten at the rear side of the 2016 Camaro and while some will dispute the legitimacy of this image – we will all have to wait until the 6th gen Camaro makes its grand debut to see who is right.