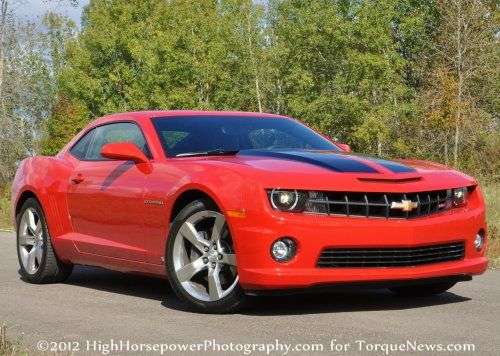 Sales numbers in the American muscle car class dipped in September 2012 from the month before but that didn’t stop General Motors from selling more Chevrolet Camaro coupes and convertibles than their competitors’ muscle cars from Ford and Dodge.
Advertisement

In terms of year over year sales growth, the Chevrolet Camaro was technically the worst of the Detroit muscle cars but even with an 18.8% decline compared to the numbers from the same month in 2011 – the Camaro moved 5,670 coupes and convertibles last month to lead the segment. September was the 5th month this year where the Camaro lead the segment in sales and on the year, GM has sold 68,968 Camaro coupes and convertibles – giving the Camaro a lead of 2,147 units over the Mustang. Unfortunately, while the bragging rights of being the bestselling muscle car in the US is nice, the fact that the Camaro is down by almost 2% for the year compared to 2011 is not what GM wants to see. General Motors’ average of selling 7,663 Camaro coupes and convertibles per month this year has them on track to sell over 9,100 muscle cars this year but we can expect to see the average continue to drop with the temperatures in the north.

In September 2012, Ford sold 4,439 examples of the mighty Mustang which is 12.2% less than the 5,504 Mustangs sold in the same month last year. Even worse, in trailing the Chevrolet Camaro by over 1,200 units last month, the Mustang has watched the Camaro pull away in its annual sales lead for two straight months after beating the Camaro comfortably in May, June and July. The good news is that unlike the Camaro, the Mustang has shown an increase of 18% over the first 9 months of 2011 with 66,821 Mustangs sold this year. Unfortunately for Ford and the Mustang enthusiast world, as we head into the winter months for much of the United States we can expect to see muscle car sales continue to decline as the snow begins to fall. This is going to make it that much harder for Ford to prevent Chevrolet from leading the muscle car segment for the third straight year. Ford is averaging 7,425 Mustangs sold each month which puts them on target for just under 89,000 units for 2012 – although the slow months are a-comin’.

Last and technically least in sales was the Dodge Challenger with just 3,230 units sold last month but the Challenger was the best of the Detroit muscle cars in year over year sales growth with a negative growth of only 3%. The Mopar muscle car only trailed the Ford Mustang by 1,209 units last month which was as close as the Challenger has gotten to either of the competitors in the class since being within 1,185 units in Ford’s abysmal January 2012. On the year, the Chrysler Group has sold 33,623 Challengers (up 11%) but with growing rumors of a revamped Challenger over the next few years along with the new SRT Barracuda – Chrysler could soon be taking a bigger bite out of the muscle car segment. However, for the time being the Challenger will have to once again settle for being the third bestselling rear wheel drive in the US market.

Anonymous wrote on October 10, 2012 - 10:33am Permalink
Chevy is playing catchup to Ford since the Camaro was not sold for a number of years