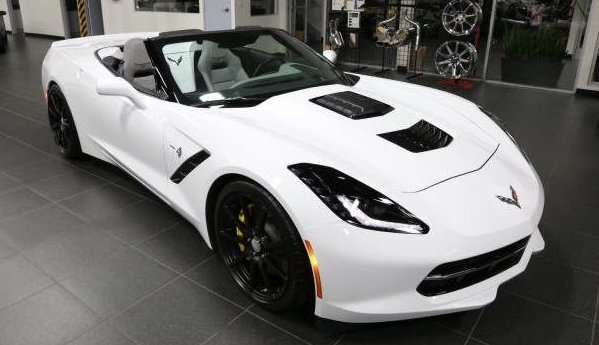 This weekend, visitors at the National Corvette Museum will get to meet the newest Callaway tuned C7 Corvette Stingray – with a supercharger package that helps this beast produce 620 horsepower and 600lb-ft of torque.
Advertisement

Callaway announced their first tuning package for the 2014 Chevrolet Corvette Stingray earlier this year and the SC610 package packed big power with 610 horsepower and 556lb-ft of torque so that package was an excellent option for those early C7 buyers who wanted way more than the standard output. This newest Callaway package relies on the same Eaton TVS2300 supercharger, but thanks to a new intake manifold system, this new package for the 2014 and 2015 Stingray lifts the power up to a whopping 620 horsepower and 600lb-ft of torque. That horsepower gain may not be all that significant, but that torque number is incredible. Even more incredible is the fact that Callaway expects that this new Corvette Stingray supercharger package will offer very similar fuel economy to a stock 2014 Corvette.

Callaway hasn’t announced any real world performance numbers for this new Corvette Stingray package, but we can make some guesses based on the capabilities of the SC610 package. With 610hp and 556lb-ft of torque, the Callaway SC610 Corvette is able to dash from 0 to 60 miles per hour in just 3.4 seconds. This new Callaway package could very likely shave a tenth or two from that time and, with a good set of sticky tires – a very well driven Callaway Corvette Stingray could tickle the sub 3 second 0-60 range.

This newest Callaway Corvette Stingray package begins with the Eaton TVS2300 supercharger combined with the unique Callaway intake manifold system and a new triple element intercooler. This package also includes a high flow exhaust system, the hood system that allows the supercharger to poke up through and a bunch of dress up items like embroidered floor mats, Callaway door sills, Callaway badging inside and out, an owner’s package and a Callaway build plaque on the supercharger housing. This package also comes with a standard 3 year, 36,000 mile warranty, but buyers can opt up to a 5 year, 100,000 mile warranty for an added price.

The only downside for this new Callaway Corvette package is the price, as with an MSRP of $22,995, it costs as much as some of the cars in the Chevrolet lineup. Added to the price of the least expensive 2014/2015 Corvette Stingray Coupe ($54,000), the driving a Callaway tuned Corvette with 620 horsepower and 600lb-ft of torque will cost you right around $77,000 and if your Corvette was loaded up from the factory, the total price could climb up around $90,000. However, when you consider the cost of the cars that this Callaway Corvette will eat up on the road and on the track – and the fact that this package comes with a warranty – you could almost call this package a bargain. Almost.

In any case, the Callaway Corvette Stingray package is an awesome performer so for those Stingray owners who want the big power of the new Z06 without having to trade in their Corvette – Callaway presents a great option and those C7 owners who are interested in seeing this new beast can do so at the National Corvette Museum this weekend.