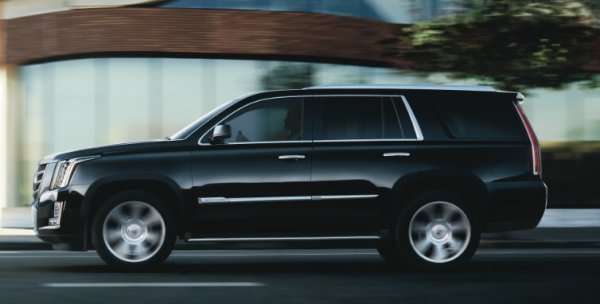 There are rumors floating around the internet that the Cadillac brand could look to expand the Escalade lineup further, including a possible Escalade V packing the 650 horsepower LT4 V8 from the Corvette Z06 and an advanced all-wheel drive system that would make it one of the baddest SUVs in the world – one that would rival the big utes from the likes of Bentley and Mercedes Benz.
Advertisement

When it comes to American luxury sport utility vehicles, there is really no rival to the Cadillac Escalade. While the Lincoln Navigator tries to compete, it falls well short in a variety of categories and because of that, the Escalade has become the top dog in the US luxury SUV segment without a whole lot of work. However, the luxury SUVs from the European and Japanese automakers are always raising the bar in both performance and amenities, so General Motors is looking to keep the Cadillac Escalade ahead of the competition.

Rumors suggest that the Cadillac lineup could benefit from a new, higher end trimline that would sit above the current Platinum package, but what interests me more is the possibility of an Escalade V. There has been no official word on this from GM, but rumors suggest that an Escalade V isn’t out of the realm of possibility and should it become a production reality – it could be one of the biggest, most powerful luxury SUVs in the world.

Escalade Luxury, Corvette Z06 Power
The reason that the idea of a Cadillac Escalade V is so enticing to me is that these rumors suggest that this premium machine would have the same LT4 V8 from the Corvette Z06 and the Cadillac CTS V. This supercharged mill delivers 650 horsepower and 650lb-ft of torque in the Corvette and 640 horsepower and 630lb-ft of torque in the Caddy, making it one of the most powerful production engines in the world. When paired with the 8-speed automatic transmission, these two supercharged GM beasts are among the quickest and fastest cars in their respective global segments, and while this engine wouldn’t make for a 200 mile per hour SUV, the Escalade V would be one of the most powerful, one of the quickest and one of the fastest SUVs in the world. Also, the Escalade V could offer more interior space than any of the other high performance SUV in the world.

In addition to the powerful LT4 V8 and the 8-speed automatic transmission, the Escalade V would hopefully keep the four wheel drive system that would afford this big ute the ability to actually use all of that power. Really, it seems perfectly reasonable for Cadillac to add in the magnetic suspension system with a sport tuning for the Escalade V, while the inside would almost certainly pack every premium amenity that Cadillac has in their arsenal.

Roadblocks and Benefits
The only “problem” with a new Cadillac Escalade V with the LT4 V8 is that the drivetrain from the Corvette Z06 and Cadillac CTSV are engineered to move a sleek sedan and a sports car – not a 6,000lb SUV. GM would likely need to beef up the transmission for the Escalade V, especially if it is going to offer any real towing capabilities.

On the other hand, if GM can come up with an 8-speed gearbox to handle 640+ horsepower from the front and the weight of a 6,000lb SUV and a 6,000 trailer on the back end, the benefits would be great. The Escalade V would pack more power than any SUV sold in the US today, and unlike many high performance SUVs, it would offer tons and tons of space. The Escalade is one of the biggest SUVs sold in America so while that leads to way more weight and slower performance times - an LT4 Escalade V would almost certainly beat any vehicle sold in the world that can comfortably seat 6 adults.

Now, we just need to hope that General Motors finds it in their heart to build a Cadillac Escalade V that would rival the rumored Jeep Grand Cherokee Trackhawk, with the 707hp Hellcat Hemi.

Adam wrote on January 16, 2016 - 9:27am Permalink
I just have one concern with this whole writing and its with the last sentence, this car wouldn't compete with the jeep. Thy jeep is not and a full size SUV, it is more of a crossover. There two are in very different categories. This Caddy would compete with the Land/Range Rover, maybe the BMW and Benz full sized luxury SUV's.