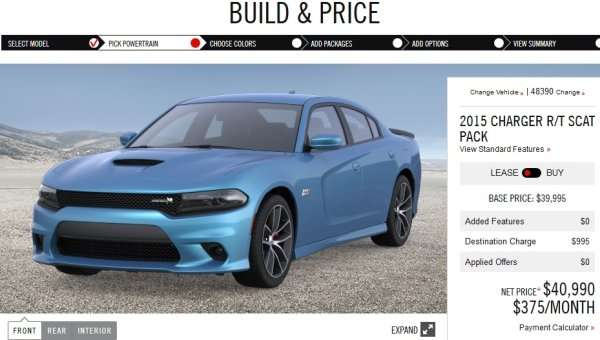 We have already looked at the detailed pricing of the R/T, SRT 392 and SRT Hellcat versions of the 2015 Dodge Charger and today, we look at the most budget minded go-fast package for the Mopar muscle sedan – the 2015 Charger R/T Scat Pack.
Advertisement

When the 2015 Dodge Charger was first introduced, the bulk of the attention was focused on the all-new front end that introduces a style we haven’t seen on past Charger sedans. This new Charger is sleek and sporty, but the attention on the front end faded when Dodge announced that this large sport sedan would be offered with the 707 horsepower Hellcat Hemi. The only problem with the Hellcat Charger is that the price starts in the mid-60k range, which is too much for many people who want a quick, daily drier-friendly sedan. Even the Charger SRT 392 has a price starting near $50k, so for those Charger buyers who want a better balance of performance and price, Dodge rolled out the new R/T Scat Pack.

Unfortunately, when the 2015 Dodge Charger configurator tool went live, the Scat Pack and the SRT packages were excluded. The SRT 392 and SRT Hellcat models were added a short time later, but the Scat Pack was still absent. Well, budget-minded high performance sedan buyers rejoice – you can now build your 2015 Charger R/T Scat Pack on Dodge.com.

Building the 2015 Charger Scat Pack
As we announced when the prices on the 2015 Dodge Charger lineup became official, the 2015 Dodge Charger R/T Scat Pack has an MSRP that starts at $39,995, which jumps to $40,990 when you add in the unavoidable destination fee of $995. This price includes the 6.4L Hemi V8 with 485 horsepower and 475lb-ft of torque, Brembo brakes, a sport tuned suspension setup, the big bright UConnect touch screen system with the Dodge Performance Pages timing and gauge system, a heavy duty 8-speed automatic transmission and unique appearance features inside and out.

That standard price includes 7 standard colors for the 2015 Charger Scat Pack, including B5 Blue, Billet Silver, Bright White, Granite Crystal, Jazz Blue, Pitch Black and TorRed while adding $500 to the final price will also let you pick from Ivory Tri-Coat Pearl, Phantom Black and Redline Red. Black cloth performance seats are standard, but for $1,495, you can add the leather package, which adds leather seats with Alcantara trim in either all black or black and Ruby Red.

Right now, when you pick the leather package on Dodge.com for the 2015 Charger Scat Pack, it also requires you to pick both the Driver Confidence and Technology Group packages, which adds a total of $4,085 to the final price. If you don’t opt for leather, but you do want the features of the Driver Confidence Group, you can add that for $595 while the Technology Group adds a long list of features and $1,995 to the final price. There is also a Beast Audio Group that costs $995 and adds a 10-speaker sound system.

Pricing the 2015 Charger Scat Pack
When you go through the 2015 Dodge Charger R/T Scat Pack and pick every option including a premium exterior paint code, the fully loaded MSRP sits right at $49,555. That price includes the engine block heater, the leather interior package, the Technology Group, the Driver Confidence Group, the Beats Audio Group, the sunroof, the black roof and the summer tires in addition to all of the standard interior and drivetrain goodies that make this package the best bargain performance sedan on sale today.

Click here to head into the 2015 Charger R/T Scat Pack configurator to build your own budget-friendly 485hp sport sedan!