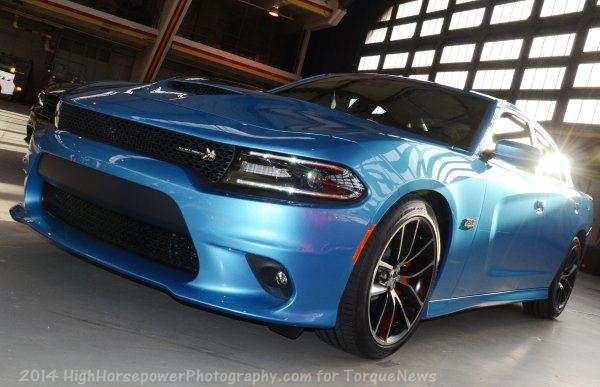 While the vast majority of the attention surrounding the 2015 Dodge Charger has focused on the new 707hp SRT Hellcat models, the new Charger Scat Pack will likely be a far more popular option for those folks looking to have a sport sedan that will crush competition like the Chevrolet SS while carrying a starting price below $40,000.
Advertisement

When the Chrysler Group introduced the 2015 Dodge Charger earlier this year at the New York Auto Show, they did so by just showing off the R/T trimline and when they introduced the new Hellcat package with 707 horsepower at the Woodward Dream Cruise, that model became the talk of the town in terms of high performance sedans. This approach made sense, as the Charger R/T will likely be the bestselling V8 model while the Hellcat Charger is the most powerful 4-door sedan in the world, ever.

What Chrysler hadn’t mentioned over the past few months of showing off the 2015 Charger is that, like the Challenger, the roomier sedan will come in a new Scat Pack trimline that will be one of the most powerful sedans sold in America and it will achieve that claim while still starting below $40,000.

Introducing the 2015 Charger R/T Scat Pack
Like the 2015 Dodge Challenger R/T Scat Pack, the 2015 Dodge Charger R/T Scat Pack is built around the 6.4L, 392 cubic inch Hemi V8 that delivers a whopping 485 horsepower and 475lb-ft of torque with all of that power being channeled to the wheels via a quick shifting 8-speed automatic transmission. This drivetrain makes the Scat Pack Charger the most powerful non-SRT option in the entire large sedan segment and with performance times including 0-60 in the mid 4 second range and a mid 12 second quarter mile time – it is also one of the quickest sedans in the segment. This powerful Hemi is connected to a dual mode exhaust system that is quiet when you are driving normally, but when you put the hammer down, this exhaust system opens up to let the Hemi breathe and roar like few other sedans in the world. While the power of the 2015 Charger R/T Scat Pack is the main attraction for many buyers, the Chrysler Group didn’t want this car to just be a straight line machine so to bolster the handling capabilities of the new package, they added a huge Brembo front brake setup that allows this brawny sedan to stop from 60 miles per hour in around 120 feet while a high performance tuned suspension system will allow this family sedan to handle the corners as well as any big sedan sold in America…aside from the SRT Charger. The Scat Pack Charger also comes with the adjustable drive mode setup, allowing the driver to customize the steering feel, the throttle input feel, the shift intensity and the stability control system through the 8.4” touchscreen on the dash.

What surprises me the most about the 2015 Dodge Charger R/T Scat Pack is how unique the exterior design is from the non-Scat Pack R/T models. While the Challenger Scat Pack looks a little different from the Challenger R/T, the Scat Pack version of the Charger takes on a far more SRT-like look. This includes a front fascia, a rear facia and a one piece rear spoiler that are very similar to what is found on the Charger Hellcat while the hood is similar to what is featured on the SRT 392 models. To differentiate the Scat Pack from the SRT models, Dodge has added subtle package-specific badging including the bee logo next to the passenger’s side taillight and a new Scat Pack logo design on the grille. Finishing off the exterior design is a set of 20 inch wheels with a machined face and black painted pockets, similar to what comes on the Scat Pack version of the 2-door Challenger. Most importantly, the Charger Scat Pack starts at just $39,995 so for less than $40k, this new performance package is thousands less than comparable large sport sedans that are – in some cases – slower. The most significant competitive model is the new Chevrolet SS performance sedan and while this car has been billed by General Motors as a “four door Corvette” – it falls well short of the Scat Pack Charger.

Charger Scat Pack VS Chevy SS
If you step outside of the Dodge Charger lineup, there really aren’t a whole lot of large sedans sold in the US that will really compete with the new Scat Pack, but the Chevrolet SS is the closest thing that you can buy without looking into the showroom of a far, far more expensive European luxury brand. The Chevy SS is billed as a four door Corvette by GM and it relies on a 6.2L V8 and a 6-speed automatic transmission that sends 415 horsepower and 415lb-ft of torque to the rear wheels. That is obviously a huge drop from the 485hp and 475lb-ft of torque offered in the Scat Pack Charger so the Charger will easily overpower the four door Corvette. Also, while the Charger Scat Pack has not been made available for test drives yet, due to its late availability, I have driven the Chevy SS and all of the other 2015 Charger models and I wouldn’t expect the Chevy to keep up with the 485hp Charger on a road course either. Also, while the 2015 Dodge Charger R/T Scat Pack will crush the Chevy SS in a straight line and probably beat it just as badly on a road course, it costs thousands less. The Scat Pack Charger starts at $39,995 (not including destination of $995) while the Chevrolet SS starts at $44,775 (also not including the $995 destination fee). It should be noted that the SS price includes a gas guzzler tax of $1,300 while the Charger Scat Pack does not – because it is efficient enough that it does not get slapped with that addition fee. In other words, the 2015 Charger Scat Pack is $4,780 less expensive than the Chevy SS that will struggle to keep up in any setting so for those looking to go fast, buying the four door Charger is a much better choice than the four door Corvette.