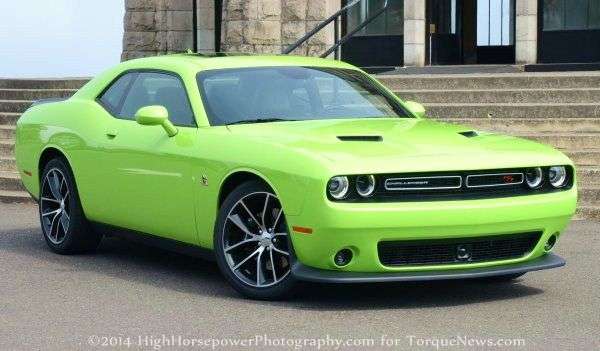 While everyone (including me) was busy focusing on the incredibly low price of the 2015 Dodge Challenger SRT Hellcat, many failed to look at the pricing for the rest of the 2015 Challenger lineup – with pricing for the other V8 models that make them great bargain buyers relative to the competition.
Advertisement

The biggest news from the Chrysler Group lately is that the 2015 Dodge Challenger SRT Hellcat carries a shockingly low starting price of $59,995, making it similarly priced to the midlevel Chevrolet Corvette Stingray 2LT and while it is a bit pricier than the Camaro ZL1 or Mustang GT500 – it is also substantially more powerful so that price difference is more than justified. What many people didn’t pay much attention to is the pricing for the rest of the 2015 Challenger lineup, with pricing for the two other Hemi V8 packages that make them relative bargains compared to the Chevrolet Camaro.

“The Dodge Challenger has been on a tear – setting an all-time sales record in 2013 – its fifth year on sale,” said Tim Kuniskis, President and CEO – Dodge Brand, Chrysler Group LLC. “For 2015, the new Challenger is the most powerful muscle car ever, the fastest muscle car ever, and now our icon is also the most capable and technologically advanced ever, with a starting U.S. Manufacturer’s Suggested Retail Price of $26,995.”

The 2015 Dodge Challenger R/T
The 2015 Dodge Challenger R/T is powered by a 5.7L Hemi V8 that delivers 375 horsepower and 410lb-ft of torque to the rear wheels by means of a 6-speed manual transmission with a starting price of $31,495. That is just $1,445 more expensive than the V6-powered Chevrolet Camaro 2LT while being almost $3,000 less than the cheapest V8 Camaro (1SS). This price is also less expensive than the 2015 Ford Mustang GT which starts at $32,100 – although I have to point out that the 2015 Mustang GT packs 435 horsepower to justify that difference in price. I should also point out that the Challenger R/T has an advantage in torque over the Mustang GT.

In any case, those prospective buyers who want to get into an American muscle car with a V8 engine for as little money as possible; the 2015 Dodge Challenger R/T is the answer.

2015 Dodge Challenger R/T Scat Pack
The Dodge Challenger R/T Scat Pack (shown above in bright Sublime green) is new for the 2015 model year, taking many cues from the 2014 Challenger SRT Core model and applying them to the non-SRT Challenger Scat Pack. That begins with the 6.4L, 392 cubic inch Hemi V8 that delivers 485 horsepower and 475lb-ft of torque – making it far more powerful than the Camaro SS or the Mustang GT. The Challenger Scat Pack also comes with a higher performance Brembo braking system and a high performance suspension system that ensures that this Mopar muscle car will corner as well as it accelerates. This package comes with a starting price of just $38,495, making it just a couple hundred dollars more than the Camaro 2SS which “only” has 426 horsepower and around $2,000 more than the 2015 Mustang GT Premium with 435 horsepower.

The 2015 Dodge Challenger Scat Pack also packs 25 more horsepower and 10 more lb-ft of torque than the 2015 Chevrolet Corvette Stingray fastback that has a starting price of $53,000. The Corvette and Challenger Scat Pack are two very different performance cars, but the comparison between the two illustrates just how much of a bargain this new 392 Hemi package will be when it arrives later this year.

Dodge Challenger SRT 392
Those buyers who want the power of the 392 cubic inch Hemi found in the new Scat Pack Challenger, but with improved handling, a unique look and more exclusivity can opt for the 2015 Dodge Challenger SRT 392. In addition to a plusher, loaded interior, the Challenger SRT 392 features a monster Brembo brake system, an adaptive suspension system, unique wheels and a unique body package that allows it to look more like the Hellcat than the Scat Pack. This package offers more performance and more luxury with a starting price of $45,995 so while it is a bit less powerful than the Camaro ZL1 – it is far less expensive.

The entire 2015 Dodge Challenger lineup is expected to arrival in dealerships around the country within the next couple months. When it arrives, it will turn up the heat on the Ford Mustang and the Chevrolet Camaro by offering more power with the Scat Pack and a lower priced V8 with the R/T models…while the Hellcat Hemi will offer more power than any American production car ever with a price that starts under $60,000. Click here for more on the Challenger SRT Hellcat pricing.

This Challenger doesn’t look all that different from the 2014 models, but the changes should help to improve sales over the next few years by making Hemi power more accessible across the entire lineup. There will be more trimlines down the road when the Shaker packages arrive, but they will not be offered at launch within the next few months.