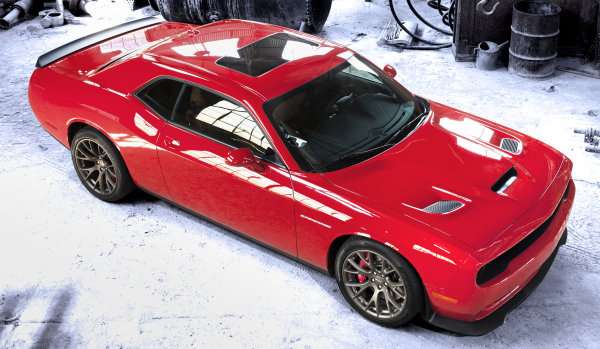 The Chrysler Group has announced the pricing for the 2015 Dodge Challenger SRT Hellcat and amazingly, this 707hp monster is actually less expensive than I had expected with a price of $59,995 – putting it in the range of the midlevel Chevrolet Corvette Stingray 2LT with 455 horsepower.
Advertisement

A few weeks back, I speculated that the 2015 Dodge Challenger SRT Hellcat would start around $65,000 and while I was close, my estimate was a bit high. Frankly, upon hearing that the 707 horsepower Challenger would start under $60,000 kind of blew my mind…but in a very good way. It should be noted that the Challenger Hellcat base price does not include destination so when you factor in that extra $995, the most powerful American production car ever technically has a starting price of $60,990.

What You Get for $59,995
The $59,995 2015 Dodge Challenger SRT Hellcat includes the 707 horsepower Hellcat Hemi, the 6-speed manual transmission and a $2,100 gas guzzler tax. Chrysler has not announced the pricing for the optional 8-speed TorqueFlite automatic transmission, but they have pointed out that opting for the elf shifting gearbox reduces the gas guzzler tax down to $1,700. On top of the high performance drivetrain, the SRT Hellcat Challenger comes with the vastly unique exterior design that improves cooling and handling, the unique interior design with package specific items like the SRT performance gauges and timers, a dual mode suspension system, an adaptive steering system and a monster set of 15.4” Brembo brakes.

Basically, everything that you need to go really, really fast with the 2015 Dodge Challenger SRT Hellcat is included in the $60,990 price so while you can in crease that price by adding things like a sunroof or the automatic transmission – that $60k base price includes everything that really matters.

Comparisons to Other Muscle Cars
If you consider the real pricing out the door for the 2015 Dodge Challenger SRT Hellcat with the manual transmission without any of the expected dealership markup, the 707hp muscle car will start at $60,990. The 2014 Chevrolet Camaro ZL1 with 580 horsepower and 556lb-ft of torque starts at $57,650 with a gas guzzler tax of $1,300 with the manual transmission and the same $995 destination fee. The 2014 Camaro Z/28, which packs “only” 505 horsepower while having what is likely a significant handling advantage, starts at $75,000 and is the most expensive car in the class (ever).

The 2014 Ford Shelby Mustang GT500 Coupe - which is now discontinued – has a starting price of $55,925 which includes destination, but it should be noted that the 662hp Mustang is not subject to gas guzzler taxes and that is the biggest difference between the price of the blown Shelby Mustang and the other two. It should also be noted that if you want a comparable adjustable suspension system to what is found in the Hellcat Challenger; you have to add the SVT Performance Package that adds $3,495 for a final price of $59,430.

Comparison to the Corvette Stingray
Most significantly, the 2014 Chevrolet Corvette Stingray has a slightly lower entry price than the Challenger SRT Hellcat at $53,995 in 1LT trim, but adding the Z51 package brings the price up to $57,995 and the 1LT with Z51 and the high tech Magnetic Selective Ride Control suspension and the performance exhaust system raises the price of the “base model” to $60,985. The Stingray 2LT is the last Corvette that has a base price lower than the Challenger Hellcat, starting at $58,205 and the 2LT with the Z51 package starts at $62,205. Oh, and if you want the high performance suspension system in your Stingray 2LT Z51, the price jumps to $64,000 even. This puts the 707 horsepower Hellcat Challenger right in the middle of the 455-460 horsepower Corvette Stingray lineup and in the long run, the average purchase price of the Hellcat will likely be very similar to the average purchase price of the Stingray fastback - not including dealer markups, of course.

The Challenger Hellcat is incredible… and the low base price makes it even more impressive.