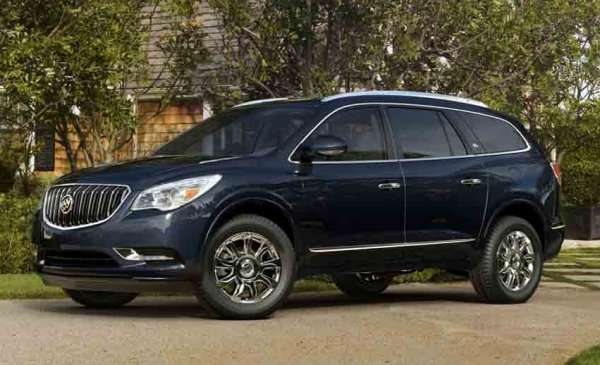 While the Cadillac Escalade is the first name in high end luxury SUVs in the US market, the Buick Enclave is ideal for those buyers who want premium amenities in a smaller, more efficient and more cost effective package – with a big luxury feel sans the big luxury price.
Advertisement

The Buick brand doesn’t get enough credit for the level of luxury offered relative to the far more expensive big-name luxury brands and the 2016 Enclave might be the company’s best example of their affordable luxury approach. Larger SUVs are all the rave in the modern luxury segment, but those folks shopping the General Motors family will find that Cadillac doesn’t have anything like the Enclave. The SRX is far smaller and while the Escalade is a remarkable machine, it starts in the mid $70k range and runs into the high 90s. On the other hand, the Buick Enclave AWD Premium offers many of the comforts and amenities that you get with the Escalade in a smaller, more city-friendly package with a price as tested of just $53,630.

The Exterior
On the outside, the 2016 Buick Enclave has the familiar face of the brand, with a big, bold grille nestled between two swooping, angular headlights. Lots of silver trim, LED lighting and projection headlights provide a very upscale look and like the LaCrosse, the Enclave has the signature triple vents on the hood. There is a ton more chrome on the sides, along the roof, across the back end and on the big, bright polished wheels. The Buick brand might not scream luxury, but there is no question that the Enclave Premium is an upscale, upmarket vehicle. Overall, the Enclave has a shape and a stance that is less like the truck-based Escalade and more like the popular crossovers, having a smaller footprint for easier maneuverability in tight situations than the big Caddy. The Enclave is also better sized for tight parking situations and cramped city driving, so those drivers who are less comfortable with something that feels like a large truck will like the Enclave’s large sedan feel which comes with this smaller stature.

The Interior
While the exterior appointments to the 2016 Buick Enclave take a more subtle approach to luxury, the cockpit could just as easily be that of a Cadillac product. The front seats and the second row seats are all bucket style, with soft leather (in Titanium grey for my test vehicle) and plush padding. There is more leather on the steering wheel, on the door panels and across the dash. The upper portion of the doors and the window switch panels are clad in matte wood trim that extends across the middle of the dash while high gloss wood trim in a matching tone is found on the steering wheel and on the center stack. A heavy dose of chrome around pretty much everything completes the luxury package, proving plenty of bling in the leather-and-wood wrapped cabin.

The front seats are power adjustable, heated and cooled and the second row seats both slide and flip forward for easier passenger loading into the 3rd row seats. Also, with the captain’s chair design in the second row, smaller kids can just climb to the 3rd row through the middle of the 2nd row. Also, while rear riders don’t get heated seats, they do get to enjoy the DVD screen mounted in the headliner with headphone jacks for the rear seats. In terms of seating space, the 2016 Buick Enclave offers gobs of space in every dimension for even very tall adults in both the front and second row. The third row is great for kids, but it is a little tighter in the back row than with the Escalade, for instance. However, with the sliding second row, you can adjust the rear rows in a way that will offer comfortable leg room for adults in all of the rear seating positions. In short, This is a great vehicle for four adults (perhaps parents and teenage kids) and three younger kids on a daily basis, and with some moving of the seats, you can comfortably accommodate 6 adults, but anyone who routinely rides around with 6 adults in their vehicle might want to consider an even bigger vehicle. However, for the vast majority of consumers, the Enclave offers an idea amount of seating space while still having a nice sized cargo area in the rear – which can be expended by folding up the 3rd row seats. For a family of four who rarely uses the 3rd row seats, folding them flat really affords you a huge area for cargo.

Aside from the aforementioned rear DVD system, the 2016 Buick Enclave AWD Premium comes with a high end Bose sound system that works in conjunctions with the Buick Intellilink infotainment system. This touch screen system oversees the sound system, the navigation system, the hands-free phone system and a collection of vehicle settings. Those folks who don’t love the use of a touch screen can adjust most features via the knobs and buttons located around the touch screen, on the heated steering wheel or via voice control. The HVAC controls are separate from the infotainment system – located just below the touch screen. The Enclave features a three-zone system with easy to use knobs and buttons in a clean little panel, and while it isn’t super-fancy, it looks nice and it gets the job done. Some luxury vehicles have HVAC systems that have a steep learning curve; this one does not. One area of the Enclave that seems a little out of place is the aqua blue on black gauge setup that is very old school GM, but these big, bright gauges are easy to see and easy to understand, while simply lacking the high tech gadgetry that you get with the pricier luxury SUVs. Fortunately, everything else that comes in the Enclave Premium for the $53k price point makes compromising on the fancy gauge cluster very easy, in my opinion. Considering how gorgeous the gauges are in many of the new GM vehicles, I would expect to see a higher tech gauge cluster for the big Buick SUV in the coming years.

Finally, one optional feature of my 2016 Enclave Premium which I would recommend for every buyer is the gorgeous panoramic sunroof system. This system features a fixed rear glass roof panel with a sliding front panel, giving rear riders the skylight view at night and extra light during the day. Also, unseen when sitting in the Enclave are the rear backup camera system, the remote start with keyless entry, a power rear cargo door and a variety of safety systems such as blind spot alert, cross traffic monitoring, lane departure warning and forward collision warning.

The interior of the Buick Enclave is comfortable, roomy and loaded with modern technologies, offering everything that you expect from a luxury SUV with a price that is $10,000+ less than comparable SUVs from the premium luxury brands.

The Drive
The 2016 Buick Enclave is powered by the 3.6L V6 with 288 horsepower and 270lb-ft of torque, and that power is sent to all four wheels via a 6-speed automatic transmission. The Enclave sits a bit lower than some other SUVs of this size and due to that, it offers a smoother ride at highway speeds than you get with some of the SUVs with more “rugged” suspension setups. The compromise to this softer, smoother suspension is that the Enclave doesn’t handle rough dirt roads as well as some other SUVs, but no one goes off-roading with the Buick Enclave and how many people really have to regularly deal with rough dirt roads? In the long run, if you need a vehicle that will handle rougher roads, you are better off looking to vehicles like the Chevrolet Suburban, which is just as big as the Escalade, but not quite as expensive. General Motors uses this same 3.6L engine in almost every vehicle in all of their brand lineups and for good reason – as it provides solid power in every normal driving situation that the Buick Enclave will encounter. Whether you are pulling out into fast moving traffic from a stop or trying to accelerate up to highway speed on a short on-ramp, the standard drivetrain does a great job of allowing the Enclave to keep up with traffic. I wouldn’t call it fast by any means, but it never felt underpowered to me and when it comes to large SUV drivers, adequate power is far more important than being fast.

As mentioned above, the Enclave has a softer suspension setup than some other large SUVs from automakers who are trying too hard to indulge the minority of buyers who claim to need off-road capabilities. The advantage to that is a big Buick handles surprisingly well for a vehicle of this size while also doing a great job of keeping rough road vibrations and noise out of the cabin. This isn’t an SUV that puts a great deal of emphasis on “sport” and thanks to that, it offers a wonderfully smooth, quiet ride for everyone inside. While I live in an area with a great many unpaved dirt roads and I like vehicles that handle those rough roads a little more comfortably than the Enclave, I don’t think that I would compromise the everyday ride quality for better rough road capabilities.

In terms of fuel economy, the 2016 Buick Enclave offers very realistic EPA figures of 16mpg in the city, 22 on the highway and 18 combined. I found that when cruising at highway speeds on long, flat stretches of road, the fuel economy number could creep up around 24mpg, but over the course of 8 days, I averaged 17.9mpg with a pretty even mix of rural and highway driving. The 2016 Buick Enclave isn’t the type of big SUV that is going to offer a thrilling driving experience, but it does offer a beautifully smooth, comfortable ride and all-wheel drive footing in rough weather while also being more capable and agile in tight quarter than some of GMs larger truck-based SUVs.

The Final Word
If you are in the market for a large luxury SUV, but you find the Cadillac Escalade to be too big and/or too expensive, the 2016 Buick Enclave might be the ideal vehicle for you. With excellent passenger space in comfortable leather seats, a premium sound system and infotainment package, a drivetrain that combines efficiency with power very nicely and a curvy, chrome exterior - the Enclave checks all of the luxury SUV boxes except for having a "luxury brand" name. If you can live with not driving a big name luxury SUV, the Enclave offers the same experience for a fraction of the price.

Andy Griglio wrote on March 2, 2016 - 6:02am Permalink
Our Buick Enclave has been EXTREMELY UNRELIABLE and has cost us thousands of dollars in out of pocket repairs (engine, trans, steering, sensors, throttle body, pumps, sensors). We have also received very poor customer service from Buick: 1-800-521-7300. I would encourage all owners with problems to Google these common issues and contact Buick and the NHTSA. This has definitely been a "different kind of luxury".