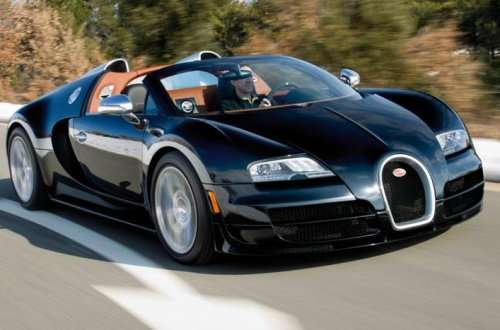 The famous Italian supercar builder has just announced a new trimline to their record-setting Veyron lineup, with the new 1200 horsepower Veyron Grand Sport Vitesse set to meet the world at the 82nd Geneva Motor Show next month.
Advertisement

The Bugatti Veyron Grand Sport Vitesse packs an 8 liter engine fitted with 16 cylinders, 4 enlarged turbochargers, and ten radiators to pound out an unbelievable 1,200 horsepower. That incredible amount of power is funneled to all four wheels via a seven speed dual clutch transmission and an ultra advanced all wheel drive system that works with an electronic steering system to enhance the drivability of the Veyron at speeds above 250 miles per hour. The combination of these components in the topless Bugatti Veyron Grand Sport Vitesse will give the legendary coach builder the claim of offering the world’s most powerful roadster ever. There is a better chance than not that once the open aired Grand Sport Vitesse gets into the hands of the people looking to break the 250mph barrier, the Veyron Vitesse will eventually be named the world’s fastest roadster in addition to being the most powerful.

"The rapid success of the Super Sport convinced us to increase the performance of the Bugatti roadster. Once again our engineers worked hard to demonstrate that Bugatti is able to constantly redefine the boundaries of what is technically feasible," reveals Bugatti President Wolfgang Dürheimer. "We gave our all to transfer the achievements of the Super Sport over to the Grand Sport, thereby turning open-top driving itself into an extraordinary experience at high speed."

In order to make sure that the Bugatti Veyron Grand Sport Vitesse can handle the added power and increased speeds, the company engineers have enhanced the chassis of the topless Veyron. In addition to being able to achieve incredible top speeds, the 1,200 horsepower and 1,106lb-ft of torque should afford the Veyron Vitesse unprecedented acceleration times with a 0-60 likely below 3 seconds and a standing quarter mile in 9 second range…and its fully street legal.

The Bugatti brand has long made vehicles that have become the stuff motoring dreams are made of and with the new Veyron Grand Sport Vitesse, it looks like the legendary supercar builder has done it again.