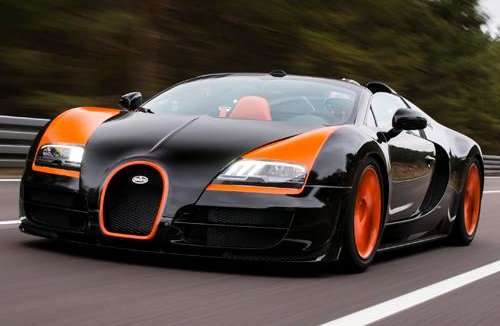 Just days after the Guinness World Records crew stripped Bugatti of their “world’s fastest car” record, the Bugatti Grand Sport Vitesse has quickly stepped up and claimed the title of the world’s fastest roadster with a recorded speed of 254.04 miles per hour with the top removed – although this newest Bugatti record may come with a bit of a catch.
Advertisement

Bugatti announced today that their incredible 1,200 horsepower Grand Sport Vitesse roadster is officially the fastest open top car (convertible, roadster, etc) with a recorded speed of 254.04 miles per hour. This speed was achieved at the Volkswagen proving grounds in Ehra-Lessian, Germany and the German Technical Inspection and Certification Association (TÜV) was on hand to both measure and verify the speed of the Vitesse. Behind the wheel of the world’s fastest roadster shown on the right in black and orange was Chinese racer Anthony Liu.

"When we introduced the Vitesse, we established the top speed for open-top driving to be 375km/h (233mph). Still, we could not let go of the idea of reaching the 400km/h (248.5mph) mark with this car as well. The fact that we have succeeded in reaching 408.84 km/h is a thrill for me, and it reaffirms once again that Bugatti is the leader when it comes to technology in the international automotive industry", said Dr. Wolfgang Schreiber, President of Bugatti Automobiles S.A.S.

The “catch” is that Bugatti has not offered any information on the measurement process or criteria used by the TÜV in recording the 254 mile per hour run of the Bugatti Grand Sport Vitesse. When the Bugatti Veyron Super Sport claimed the title of world’s fastest car back in 2010 with a top speed of 265.7 miles per hour, the company followed standard Guinness World Records criteria of making the speed setting pass twice – once each direction on the same surface, taking an average of the two. Doing it this way helps to be sure that it is the power of the car and not something like a strong tail wind aiding the car to record speeds. If Bugatti did not follow a similar procedure in reaching 254.04mph with the Veyron Vitesse, there is a chance that he Guinness people will not recognize the record setting speed.

Even though the newly reported top speed of 254.04 miles per hour by the Bugatti Veyron Grand Sport Vitesse is not yet official, there is really no supercar on the horizon to challenge the Bugatti claim. Should the folks from the Guinness Book refuse this figure, Bugatti may be forced to re-attempt the record in a more official setting or risk a competitor stepping up and claiming the record with a car that is technically slower. Either way, there is really no competition for the Grand Sport Vitesse in terms of roadsters that could topple that 254mph figure so whether or not Guinness approves the record – buyers know that this is the fastest topless sports car in the world.

To celebrate the new world’s fastest roadster record, Bugatti plans to sell 8 copies of a special new “World Record Edition” Veyron Grand Sport Vitesse finished in the same orange and black as the car driven into the record books. Each of the Veyron Grand Sport Vitesse World Record Edition roadsters will carry a price tag of roughly $2,611,477 and the move to have a Chinese driver set the record may encourage Chinese millionaires to snatch up these incredibly fast, limited edition Bugatti roadsters. The World Record Car will be unveiled to the world for the first time at the Shanghai Motor Show 2013 later this month.

Regardless of whether or not this report puts the topless Bugatti in the Guinness Book of World Records – I salute the folks at Volkswagen and Bugatti for putting together a truly remarkable piece of automotive history. The Veyron has long been a supercar by which all others were compared and with a speed of 254 miles per hour – the Veyron name keeps on adding new chapters to the history books.