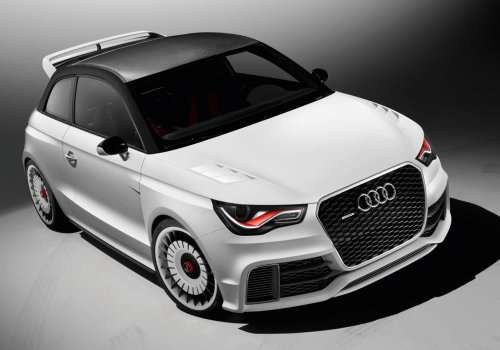 Audi has thrown their hat into the ring for the battle of the hottest high performance hatch with the introduction of the new Audi A1 Clubsport Quattro Concept and thanks to the folks from Electronic Arts, PC gamers can drive the new hot hatch in Need for Speed World.
Advertisement

All of that power is channeled to all four wheels by means of a six speed manual transmission and Audi’s Quattro advanced all wheel drive systems; both of which are borrowed from the TT RS and modified to handle the added power of the A1 Clubsport. Thanks to the low weight of the compact A1 chassis, the Clubsport Concept boasts a power to weight ratio of just 6lbs per hp (for comparison, consider the fact that the Corvette ZR1 has a power to weight ratio of 5.22lbs per hp). This affords the A1 Clubsport Quattro Concept the ability to rocket from 0-60 in under 3.7 seconds and from a stop to 125 takes the high performance hatch just 11 seconds – all while hitting a top speed of 155.34mph.

Audi didn’t stop at just making the A1 Clubsport Quattro Concept very fast, as they also made hefty exterior modifications to prepare this car for a day of head-turning at the track. The A1 Clubsport features a unique widebody kit that features a front fascia that is far more aggressive than the standard production A1, with large cooling openings found in place of the foglights from the traditional units. The hood has been modified by means of a set of large air ducts allowing hot air to escape from the engine bay. Along the side, the fenders, quarter panels and door panels have been flared a total of 2.4”, making room for the unique turbine style wheels wrapped in high performance rubber with the A1 Clubsport’s 503 horsepower being announced by the integrated exhaust tips which pokes through the body just in front of the driver’s side rear tire. Out back, the A1 Clubsport Quattro Concept features a monsterous roof-mounted spoiler with an aggressive lower splitter running the width of the brawny A1.

The majority of the Audi A1 Clubsport Quattro Concept is finished in a matte finish Glacier White with black accents all over, including the carbon fiber-reinforced polymer roof and the air ducts along the front of the car. Satin silver makes an appearance in the door handles, exhaust tip, and side mirrors with just enough presence to remind you that while the A1 Clubsport is a concept built for high performance – it still offers that touch of Audi luxury.

Inside, the A1 Clubsport Quattro Concept continues the sport-luxury feel with gobs of exposed carbon fiber with a matte finish, flanker by leather on the door panels, steering wheel and seats. The carbon fiber look is also carried through to the rear interior panels, the center console and air vents and stainless steel pedals top off this sexy, sporty interior.

Sadly, the Audi A1 Clubsport Quattro Concept is, right now, only a concept but thanks to some help from the folks at Electronic Arts, PC gamers have a chance to experience the new A1 Clubsport in the online experience of Need for Speed World. Starting on June 1st and running through June 4th, NFS World players can check out the new high performance Audi hatch as part of the games “rental” system, with this 4 day rental coming free of charge to the gamer. For more information on that, visit http://world.needforspeed.com.

Check out the gallery below for a closer look at the new Audi Audi A1 Clubsport Quattro Concept.

Used cars for s... wrote on August 26, 2011 - 2:10am Permalink
Audi is the best manufactured company in the auto world. Audi is really passionate car… <a href="http://www.usedmotordealers.net/usedcarsforsale/usedcars.php">Used cars</a>