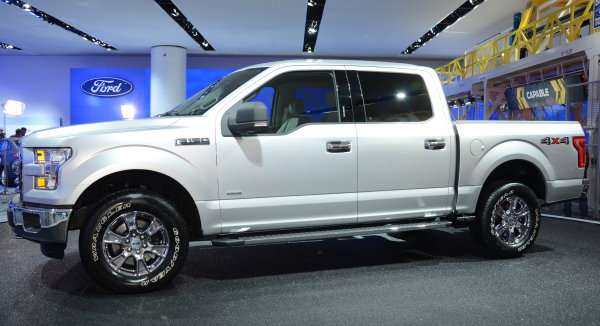 The National Highway Traffic Safety Administration has announced the crash test results for the 2015 Ford F150 SuperCrew and with a 5-star overall score, the lightweight aluminum F150 is the safest ever – being the first to score 5 stars under the new scoring system and equaling the numbers of the competition.
Advertisement

The National Highway Traffic Safety Administration has recently adopted a tougher scoring system for their annual crash test safety rating and the 2015 Ford F150 has used this new method to show us that even with a lightweight new body, this half ton pickup is safer than the outgoing model. The NHTSA recently published their results for the 2015 Ford F150 SuperCrew and while the aluminum bodied pickup didn’t score 5 stars in every single metric – it did improve everywhere there was room for improvement while also receiving a 5-star overall score.

The 2015 F150 Ratings
The National Highway Traffic Safety Administration safety ratings are based on a variety of different tests, all of which factor into the overall score. The three types of impacts are Front Crash, Side Impact and Rollover and there are breakdowns for driver and passenger in each of the first two, along with a chance of rollover percentage for the final figure. The new F150 scored 5 stars in Front and Side, 4 stars in Rollover and an Overall safety rating of 5 stars. Most importantly, the new F150 has improved a great deal over the prior generation, even though this new truck is considerably lighter.

During the Side Impact portion, the 2015 F150 scored 5 stars in side crash and side barrier with 5-star ratings for both the driver and passenger during side crash testing. The new F150 also scored a 5-star rating in Side Pole impacts and 5-star combined side impact ratings for both the front and rear seats. The 2014 F150 scored the same perfect 5-star ratings in every side impact category as well, so the 2015 didn’t get better – but only because the older models were already at the top of the scale.

So, outside of the rollover score that is inherently impossible for a high riding truck to ace, the 2015 Ford F150 really did as well as the team could have hoped. Even with the lightweight aluminum body, the new F150 is safer than the outgoing models and it is as safe as any other large truck, matching the 2015 Chevrolet Silverado with 5-star scores in every category shy of rollover.