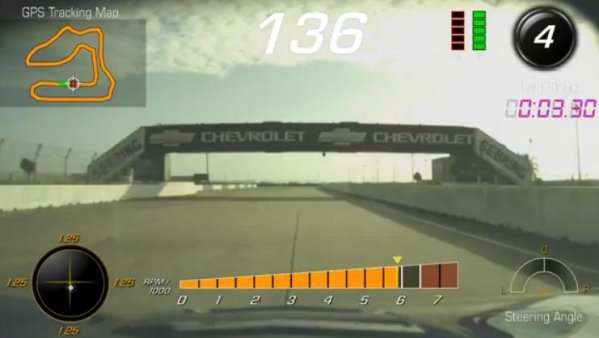 The ink is barely dry on the presser introducing the Performance Data Recorder that will be offered in the 2015 Corvette lineup and we are already wondering if the 6th generation Chevrolet Camaro will also feature this incredible system – because the 6th generation Camaro should most certainly include the PDR system.
Advertisement

The Performance Data Recorder system that will be available in all 2015 Chevrolet Corvette models brings factory-issue performance measurement systems to the next level but if history has taught us anything – it is that the Chevrolet Camaro will most likely feature at least some similar form of the Corvette’s PDR. Over the past few decades, the vast majority of features that were first introduced in the Chevrolet Corvette would end up as a feature of the Chevrolet Camaro within a few model years. This method allows the Corvette to offer an exclusive feature for a few years before then making that feature more accessible by offering it in a slightly newer Camaro.

When the 6th generation Chevrolet Camaro makes its grand debut (most likely as a 2016 model), it will surely be the best performing Camaro of all time whether we are looking at the base model or the top of the line package. With those high performance goals in mind, making a performance measurement system available makes perfect sense and by the time that the 2016 Camaro arrives, the Performance Data Recorder system won’t be the new hot feature so General Motors won’t be detracting from the Corvette by offering this high tech system in the 6th gen Camaro.

Both the Ford Mustang and the Dodge Challenger offer a performance measurement system that includes 8th mile, quarter mile, 0-60 and braking timers along with G force meters but Camaro fans haven’t been privy to a similar system. Should GM introduce the Corvette’s Performance Data Recorder to the 6th generation Chevy Camaro, GM muscle car buyers will not just be able to measure the performance of their vehicle – they will be able to capture it all on high resolution video with sound and an elaborate replay system.

The 2014 Chevrolet Camaro has a big, new infotainment screen so we can be certain that the 6th generation Camaro will also have a large infotainment screen and that is the first component of the Corvette’s Performance Data Recorder system. From there, GM would only need to add the high definition camera in the windshield header, the SD card reader in the glove box and the necessary software to make everything work together. Once everything is installed, 2016 Camaro owners will be able to record the same stunning videos with a performance data overlay via the high tech system that will debut on the 2015 Corvette Stingray Coupe, Convertible and the new Z06.

The two videos below offer a look at the 2015 Chevrolet Corvette Performance Data Recorder system in action – one with a member of the Cosworth development team and another with Corvette C6R driver Tommy Milner. Considering that the 6th generation Camaro isnt like to arrive for a year or two this system could evolve before it becomes an option in the higher volume, lower priced GM muscle car but from what we have seen thus far in the videos – the Cosworth/Corvette Performance Data Recorder system looks like a feature that will be hard to improve. This system looks like one of the coolest new features to hit the performance world in years and it will be interesting to see how Ford, Chrysler and other automakers who offer performance models will come up with their own similar system that records performance numbers, video and sound.