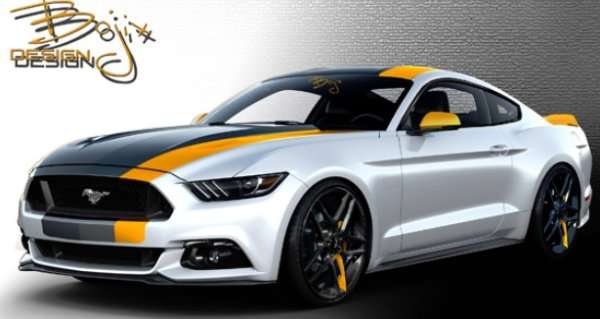 We have already had an early look at a 2015 Ford Mustang EcoBoost with 900 horsepower which will certainly be a showstopper at the 2015 SEMA Show, and today we bring you a look at four other new EcoBoost Mustang show cars that will help fill Ford’s huge indoor display.
Advertisement

While Ford Motor Company will have a spread of customized vehicles at the 2015 SEMA Show in Las Vegas, the mighty Mustang will surely be the most popular vehicle on display. In the past, the Mustang GT with a V8 engine has been the more prevalent model in the Ford display, but for the 2015 show, it looks like the Motor Company is putting more emphasis on the new turbocharged 4-cylinder EcoBoost model.

Last week, we looked at the first image and some information on one new Mustang EcoBoost coming to the SEMA Show with 900 horsepower and while the others don’t have the same massive power output – these other four EcoBoost Mustangs might have more importance to owners, since the features of these vehicles are likely to be more common than a 900hp engine build. 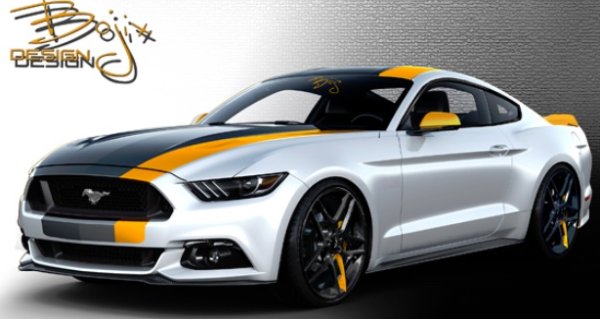 First up, we have this white, black and yellow Mustang EcoBoost fastback, courtesy of Bojix Design.

Finally, this Mustang EcoBoost Fastback has a long list of performance modifications, and while we don’t get any power figures – this pony car should pack far more than the 310 stock horsepower. Bojix has added an intercooler, charging pipe setup, an upgraded turbo, a new turbo downpipe and an intake setup to the 2.3L engine, along with a custom Magnaflow exhaust system. Next, a Cortex front and rear coilover suspension setup, adjustable front and rear sway bar end links, 3.73 rear gears, Eibach sway bars and a Brembo front and rear braking package help to ensure that this Mustang brakes and corners just as well as it accelerates.

This Ford Mustang EcoBoost Fastback has clearly been designed to look like a police car for the “Drag Racing Against Gangs and Graffiti” program – or DRAGG.

Since this is a car designed to catch the attention at racing events, it has been clad in the livery of every racers’ biggest enemy – Johnny Law. This Mustang features a carbon fiber body kit and rear spoiler from Air Design USA, a custom push bar from the City of Oxnard (seriously!), a full police lighting package, new headlights, 3M police graphics and the “Thin Blue Line” stripe from JN Designs.

If you were to glance at this new Ford Mustang EcoBoost fastback, you might mistake it for a new Shelby GT350R, with a custom widebody kit with help from the folks at RTR giving it a very similar look to that of the new GT350R. The front end of this Mustang and the rear spoiler appear to be nearly identical to the new Shelby Mustang, while the widebody kit and the huge 20 inch bright blue wheels wrapped in Nitto tires give this EcoBoost Mustang an even more aggressive stance than the GT350R.

Since Ice 9 wanted this Mustang to be more than just a looker, they performed a serious build-up of the 2.3L EcoBoost engine, adding a Garrett GTX3076% turbo, a Vortech front mount intercooler and blow-off valve, a TIAL wastegate, a Corza prototype exhaust system with Ice 9 exhaust tips and tuning help from COBB and Dead Hook Motorsports. The result of this build is a 4-cylinder mill that puts 475 horsepower to the ground and when coupled with the Air Lift performance suspension setup, the Watson Racing roll cage and some interior bits from the GT350R – this 4-cylinder Mustang is ready to tackle any road course. Last and most certainly not least is the Ford Mustang EcoBoost Convertible by TS Designs.

There is no power estimate on the TS Designs Mustang Convertible, but with a RaceTec intercooler, a K&N intake setup and a Maganflow exhaust system – this pony like packs more than the standard 310hp as well.

Tesla Giga Berlin's New Hurdle: It's Not Only the Gov't, but Now Tesla Itself
Teslas Are Sold Out Until 2023, But The Timing May Reverse
END_OF_DOCUMENT_TOKEN_TO_BE_REPLACED