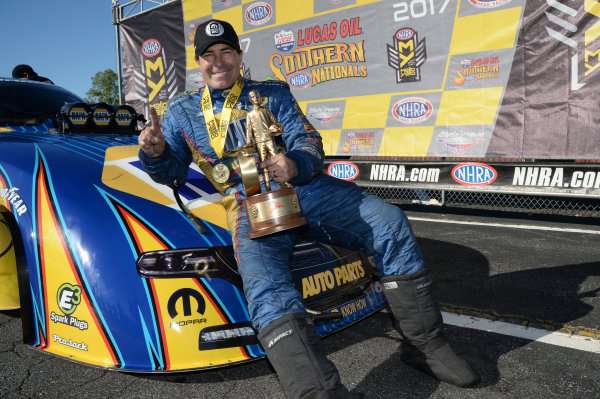 The domination of the NHRA Funny Car class by the crews from Don Schumacher Racing continued this past weekend as Ron Capps drove his Dodge Charger to his 3rd straight win and the team’s 6th win in 7 races this season – beating the Camaro funny cars of John Force and Robert Hight on his way to the final round win against Tim Wilkerson in the Mustang.
Advertisement

To say that 2017 has been a great season for Don Schumacher Racing is a bit of an understatement, as Leah Pritchett has been the top dog in the Top Fuel class all season while three of the four Dodge Charger drivers in the Funny Car class have won at least once this season. Even though we are only 7 events into the season, Matt Hagan has won twice, Tommy Johnson Jr has won once and with his 3rd straight win coming this past weekend in Atlanta, Ron Capps has won 3 times.

The only other funny car driver to win an event this year is John Force, whose team opened the 2017 racing season in a heated feud with Don Schumacher Racing, but so far, the DSR Dodge Chargers have had the laugh in every other stop of the young NHRA season.

In Atlanta for the Lucas Oil Southern Nationals, the Don Schumacher teams continued to beat the John Force teams in the head to head battles en route to yet another event win.

Qualifying
Qualifying for the 2017 Lucas Oil Southern Nationals started off slow, with only two funny car drivers – Tim Wilkerson and John Force – finding their way into the 3-second range. Courtney Force also turned a very fast time of 4.017, so the Camaros once again came out of the trailers fast while the Chargers struggled. In that first round of qualifying, none of the Don Schumacher Dodge Charger funny car drivers had a particularly strong pass, with Hagan, Capps and Beckman all turning in 5-second passes while Tommy Johnson Jr ran an also-slow 4.731.

Things wouldn’t improve for Beckman in the 2nd round of qualifying, but Capps, Hagan and Johnson all made strong runs on their next pass. Capps ran a 3.955, Johnson ran a 3.937 and Hagan ran a 3.930, but there was one other 3-second car in the 2nd and final round of Atlanta qualifying (qualifying was shortened due to rain) – the Camaro of Courtney Force. Her run of 3.893 at 322.65mph was enough to hurdle her into the top qualifying spot once again, so the starting order for eliminations was Courtney Force and her Camaro in the top spot, Hagan, Johnson and Capps in 2nd 3rd and 4th in their Chargers and John Force and his Camaro in 5th. Tim Wilkerson and his Ford Mustang qualified in the 6th spot, Robert Hight got the 9th spot and Jack Beckman settled for the 14th spot, for those keeping track at home.

Eliminations
Qualifying for the Lucas Oil Southern Nationals may not have been fast, but eliminations were fast from the start. Courtney Force ran a 3.967 to knock off Jeff Diehl, Robert Hight ran a 3.882 to beat Chad Head, Ron Capps ran a 3.901 to be JR Todd, Matt Hagan ran a 3.887 to beat Cruz Pedregon, Jack Beckman ran a 3.958 to beat Tommy Johnson Jr and Tim Wilkerson ran a 3.914 to beat Jonnie Lindberg. Lots of 3-second runs in the 1st round set up some exciting battles for round #2.

First up, Courtney Force faced off with teammate Robert Hight and when Hight ran his second 3.88X run of the elimination rounds, he advanced to the final four. Ron Capps ran a 3.952 to John Force’s 3.960 while Matt Hagan made short work of Dave Richards and Tim Wilkerson ended Jack Beckman’s day.

The 2nd Don Schumacher Racing-vs-John Force Racing came in the final four, when Ron Capps took on – and knocked out – Robert Hight when Hight’s Camaro couldn’t keep up the 3-second pace. On the other side of the bracket Tim Wilkerson and Matt Hagan both had slow runs, but Wilkerson’s Mustang took the win.

The final match of the Funny Car class took place between the Ford Mustang of Tim Wilkerson and the Dodge Charger of Ron Capps. Wilkerson was slightly slower than Capps in each round leading up to the finals, but in the final round – the Mustang ran a 3.978 to Capps’ Charger’s time of 3.991. However, Capps had such a huge starting line advantage that the blue Dodge funny car got to the finish line first. Wilkerson had the quicker ET, but Capps’ starting line advantage was enough for him to get the win.

The was Capps’ 3rd straight win and the 6th in 7 races for Don Schumacher Racing.

Championship Standings
On the season, Ron Capps and Matt Hagan have pulled out to a commanding 1-2 lead over John Force in 3rd. Johnson is 5th and Beckman is 6th right now, but those two are within striking distance of the Camaro drivers ahead of them in 3rd and 4th.

In short, the Don Schumacher Racing Dodge Charger funny cars are in good shape to all make it into the Countdown to the Championship events later this season.