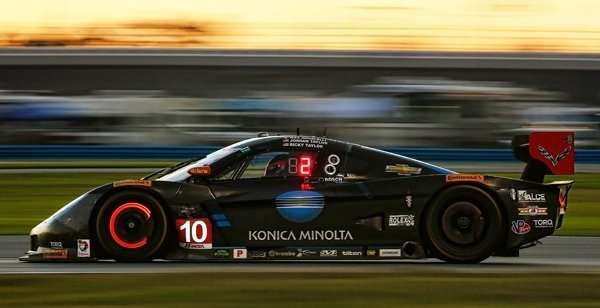 he Wayne Taylor Racing #10 Corvette Daytona Prototype ran into a driver seat time issue late in the 2015 Rolex 24 at Daytona that forced driver Jordan Taylor to give up his chance at the win, but after further review by the IMSA officials, the Taylor Corvette was disqualified and moved from 3rd in class to last overall.
Advertisement

If you turned the 2015 Rolex 24 at Daytona off an hour from the end, there is a good chance that you expected the #10 Corvette Daytona Prototype owned by Wayne Taylor Racing and driven by Wayne’s son Jordan to cruise to the Prototype class victory and the overall Rolex win. Unfortunately, a crushing error by someone in the pits forced the Taylor Corvette DP to pit less than 15 minutes from the end of the race in order to avoid a violation of the rules that would result in a disqualification. That left the Taylor Corvette to settle for a 3rd place in class and overall, which still wasn’t bad at all if you didn’t know why the team finished 3rd instead of 1st. Click here in case you missed our review of the Corvette's domination at the Rolex 24.

While that costly error took the overall Rolex 24 win from the Corvette and handed it to the Ford EcoBoost race car of Ganassi Racing, the news has gotten even this morning.

It turns out that when the #10 Corvette rushed into the pits for an emergency driver change with less than 15 minutes left in the race, Jordan Taylor had already broken the rule in question. As a result, the team was disqualified and moved from 3rd to 53rd – dead last.

The Rule in Question
The IMSA rules state that during an endurance race like the Rolex 24 at Daytona, a driver can only drive 4 hours over the course of a 6 hour period. The team had originally calculated that Jordan Taylor would be able to drive through the end of the race and make a run at the win. However, in the last half hour of the race, the team realized the mistake and brought the #10 Corvette into the pits for an emergency driver change.

Jordan’s brother Ricky Taylor jumped into the Corvette DP and headed back onto the track, only to come back in to serve a penalty for the team coming into the pits while the pits were closed. Ricky Taylor was able to run well enough in the last 11 minutes to hold onto the 3rd position in the Prototype class and 3rd place overall.

However, after closer inspection, it was discovered that Jordan Taylor had spent 4 hours and 19 minutes behind the wheel of the black Konica Minolta Corvette and as virtue of such, the team was in violation of the driver seat time rule. As a result of this rule violation, the #10 WTR Corvette DP was moved from 3rd in class to last in class and since there were 16 cars in the class, the WTR Corvette was moved to 16th in class. Even worse, since the Prototype racer that actually finished last in the class – the #0 Nissan DeltaWing – also finished last overall, the #10 Corvette was moved to last overall.

Losing a chance at the Rolex 24 had to be painful, but being moved from 3rd to 53rd due to a driver seat time calculation has to be crushing for a team that had such high hopes coming into the season.

The Good News
There really is no good news from this whole calculation mess with the Wayne Taylor Racing Corvette, but the IMSA board did go a little easy on the team. Under the rule which was violated, the team should not get any finishing points, but after further consideration, the IMSA officials allowed the team to score points as though they finished last. It is a huge drop from 3rd, but it is better than getting no points for a team that has a strong chance at a championship run in 2015.

Also, with the Rolex 24 being just the first race in the 2015 Tudor United Sports Car Championship and the #10 Corvette DP looking so strong throughout the first race – Wayne Taylor’s team has a whole season to make up for that shocking math error.

There is also some good news for Corvette and GM racing fans, as with the #10 Corvette DP being disqualified, the vacant 3rd place spot went to the #90 Corvette DP team while the #3 Corvette Racing C7.R moved into an impressive 4th place overall finish in winning the GT LeMans class.