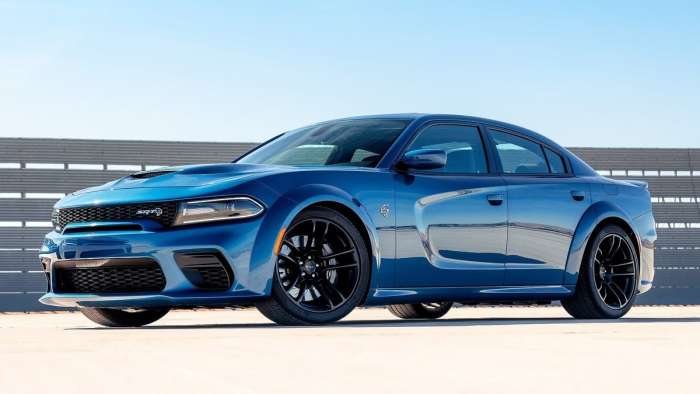 2020 Dodge Charger: Why There is No All-Wheel-Drive V8

The 2020 Dodge Charger is available with all-wheel-drive, but not with V8 power and today, we look at why you can’t buy a Mopar muscle sedan with a Hemi spinning all four wheels.
Advertisement

A great many people commented to voice their displeasure with the lack of an all-wheel-drive Hemi Charger, and this is certainly not the first time that we have heard of this complaint. There are often rumors that Dodge is working on a high performance all-wheel-drive system, but none of those rumors have ever been substantiated, nor do I believe them to be true. Some people point out the fact that the Charger R/T used to be offered with the 5.7-liter Hemi V8 as a reason why Dodge “needs” a V8 AWD sedan, but in reality, the older Charger R/T AWD proves why Dodge really doesn’t need that package in the lineup.

Why No Charger V8 AWD
Prior to 2015, Dodge offered the Charger R/T with the 5.7-liter Hemi V8 and optional all-wheel-drive. It was a popular package with those folks who bought them, many of whom lived in areas with heavy winter snowfall. The AWD Charger R/T allowed these Dodge drivers to enjoy their Hemi-powered sport sedan all year long, but when the current models were introduced for the 2015 model year, the AWD R/T was gone from the consumer market. Since then, the only Chargers with all-wheel-drive that can be ordered also have the Pentastar V6. There is a police-only package for the Charger with the 5.7-liter Hemi and all-wheel-drive, but that is another system that isn't designed for high performance, nor is it available from the dealership for the average consumer. We aren't talking about buying used cars here. 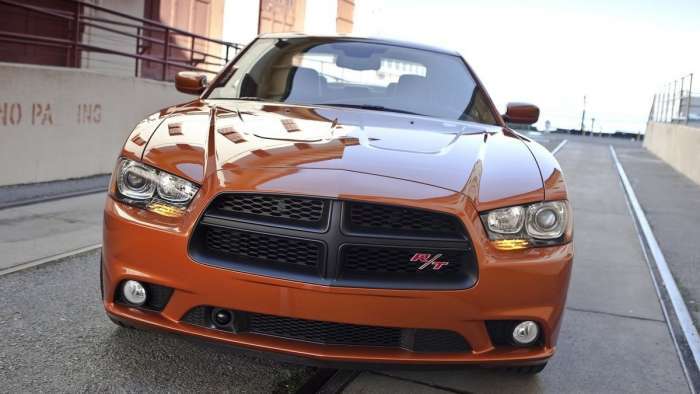 All of the people who owned and loved those winter-friendly Hemi Chargers don’t understand why the package wasn’t carried forward to the modern generation. With both the Charger R/T and the Chrysler 300C, which was also available with the 5.7-liter Hemi and AWD, the option was discontinued due to poor sales. FCA representatives won’t provide actual sales numbers for the large sedans with V8 power and all-wheel-drive, but we were told off the record that numbers were so low that the company lost money on development of the package.

Keep in mind that with all-wheel-drive packages, the automaker has to conduct specific crash testing and emission testing, and that isn’t cheap. When you add in the facts that this unpopular package technically costs the company more in terms of development, engineering and production, only to sell poorly, there is little question as to why you can’t buy an AWD Charger R/T.

Also, in speaking with a member of the FCA team who asked to remain anonymous, the vast majority of people who buy a Dodge Charger with a Hemi want the rear-drive, muscle car feel. The all-wheel-drive system is really only helpful during the winter months in specific areas of the country. In areas where there is no snowfall, there is really no practical need for an all-wheel-drive Hemi, so few people buy them. In those areas where all-wheel-drive would be helpful in the winter, many people have second vehicles, such as trucks or SUVs. As a result, the narrow market of people who can make good use of an AWD V8 Charger don’t really want one, and with low interest and low past sales, Dodge really doesn’t need a vehicle that has lots of costs without many benefits.

The bigger issue is that the Hellcat Charger, its chassis and its suspension system are designed to allow for lots of weight transfer to the rear wheels. Putting more weight to the rear helps with traction and with the combination of enough weight transfer and enough grip, the Hellcat Charger lifts the front wheels off of the ground. Needless to say, launching with the front wheels in the air eradicates any advantage that comes with the all-wheel-drive. 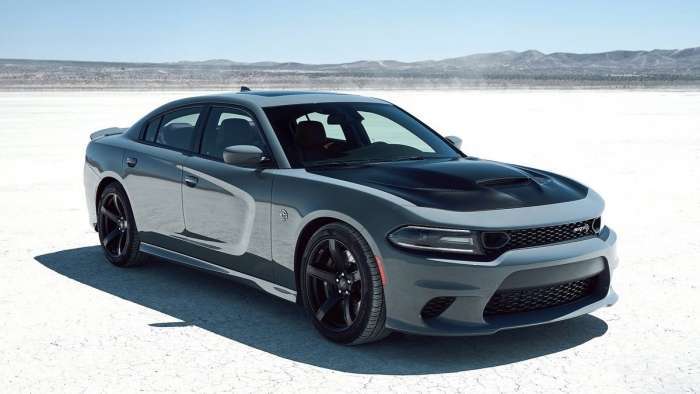 This means that to make the most of the all-wheel-drive’s hard launching ability, the suspension and chassis systems would have to be retuned to help the car launch a little flatter.

Big Price
The all-wheel-drive components in the current Dodge Charger SXT and GT are rated for 300 horsepower and 264 lb-ft of torque. The AWD Charger R/T offered up until 2014 had components designed to handle 370 horsepower and 395 lb-ft of torque. If you used either of these systems with the Hellcat Hemi, the supercharged V8 would likely rip the transfer case in half right away. Even if these all-wheel-drive components, such as the inner workings of the transfer case, were upgraded, these are still low performance systems that would struggle to survive the impact of a big torque launch.

This means that for Dodge to offer the Charger with all-wheel-drive in Scat Pack or Hellcat form, the company would have to develop components that would handle the power and the weight of the vehicle. These parts would also have to fit under the Charger without altering the ride height, which seems to be the problem with the transfer case and front differential of the Jeep Grand Cherokee Trackhawk. The Jeep has lots of room under the chassis for the all-wheel-drive bits, but the Charger does not. To use the Jeep parts and maintain the current ride height of the Scat Pack or Hellcat, the chassis would have to be altered, and that gets expensive in a hurry – especially for a vehicle with a low take rate.

Basically, for Dodge to offer the Charger Scat Pack or Hellcat with all-wheel-drive, the engineers would have to develop AWD components that would be unique to this chassis. Unlike the V6 AWD parts, this system would need to be very heavy duty, but it would have to be as physically compact as the V6 parts.

It wouldn’t be easy and it would be expensive, and that cost would be passed onto the customer. An all-wheel-drive Charger Scat Pack or Hellcat would likely cost thousands of dollars more and in the end, the only benefit for most people would be on a hard launch. Yes, these cars would be a bit better in harsh weather, but the reality of the situation is that most people who would buy an AWD Hellcat Charger that starts upwards of $80,000 are going to be driving it in heavy snow.

In closing, those folks who don’t understand why there is no AWD Charger with a Hemi should understand that when it was available, it sold very, very poorly. Aside from that, the Hellcat Charger would only benefit a bit from the inclusion of all-wheel-drive, but it would make the car heavier and far more expensive.

Now, when the next generation Dodge Charger arrives in a few years, perhaps the chassis will be designed to better incorporate Hemi power with all-wheel-drive, but based on the slow past sales, the difficulties with developing a high performance AWD system and the costs associated with the entire idea – there is very little chance that the current Hellcat Charger will get all-wheel-drive.

DeanMcManis wrote on December 17, 2019 - 1:04pm Permalink
I would say that the reason why their short run of V8 AWD Chargers sold poorly would be marketing. I don't remember reading anything about the AWD models other than the V6 versions, and most likely the only sales pitch would have been for snow driving. Plus having more power in the snow is not necessarily an advantage. But it has a huge advantage for putting power to the ground with a performance car in dealing with poor street surfaces, uneven roads, and of course rain and snow. And AWD is far more consistent for any straight line racing. The Challenger's ponycar rivals, the Mustang and Camaro are only RWD too, but if you look upmarket to Audi, BMW and Mercedes, they are favoring AWD for their performance sedans. The new BMW M5 added AWD and it manages 0-60 in 2.8 seconds, with a 10.8 second 1/4 mile, which is supercar territory. And all Mercedes AMG models will soon be AWD. The Charger's chassis is based on the previous Mercedes E-series, so it is likely that it has the room for the necessary transmission/deiveline upgrades for AWD. Another option that might not be immediately approved of by the Hot Rodder crowd is that German based transmission maker ZF, (who currently makes the 8 speed gearbox on the Charger today) looks like it will be offering an AWD/hybrid transmission that drives all of the wheels in electric, hybrid, or gas engine only modes. Sure the added weight and less simple design of an EV drivetrain, but Chrysler could vastly improve their car's fuel economy, while at the same time improving performance, and safety too.
AHBguru wrote on January 6, 2020 - 9:11am Permalink
"The Charger's chassis is based on the previous Mercedes E-series, so it is likely that it has the room for the necessary transmission/deiveline upgrades for AWD" Patently, blatantly FALSE. The original LX cars were pure Chrysler design, with certain DB influences. There was some parts sharing, but that started to go away after 2007. In 2011, when Chrysler reengineered the LX into the LD, most of that Mercedes influence ("synergies") were largely eliminated; completely so by 2015. The 2021 Charger Pursuit lineup is expected to consist of 4 models: - V6, RWD, 850RE - V6, AWD, 850RE - V8, RWD, 870RE - V8, AWD, 870RE It should be noted that Fleet did test the AWD 8-spd models at the 2020 MSP Vehicle Evaluations, but the 2 models offered in the very brief 2020 production run (V6 RWD/V8 AWD) were built with the last of the Chrysler A580 5-spd transmissions.
Dreaming of Mopar wrote on May 28, 2020 - 6:16pm Permalink
There wasn't enough research done here - the Grand Cherokee SRT and Trackhawk feature full time AWD systems with 470 and 645 lb-ft of torque, respectively and are rated to tow 7200lbs. Strength of the components in the FCA parts bin isn't the issue. You did hit on what is likely the biggest barrier - cost. Those parts are expensive and then the perception that AWD in a high HP application would be for performance. Dodge has chosen to market their high performance muscle cars as exactly that, muscle cars. The waters get really muddy when you start trying to compete with the WRX and GTR. That is not where Dodge wants to or can compete. They can build it, but will anyone pay for it? Sure, it would be cool to stand on a 6.4 Hemi in the snow with good tires and be able to get traction, but I doubt it would be a remarkable improvement on the dry, and these cars are already challenged against their competition in the dry handling arena because of weight.
Clean Performance wrote on June 9, 2020 - 4:15pm Permalink
Shed the weight of a Hemi for 4 equally dispersed electrical axle motors with the combined torque for added traction to a lifted chasis will likely add traction & acceleration to exceed the current high performance models. The present FCA 5 year investment plan puts the money back into Detroit perhaps the future home for the next generation of clean low carbon Challengers and Chargers. Did I say Charger?