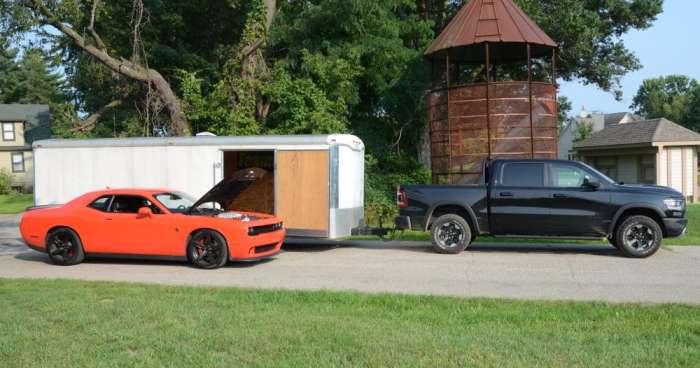 The Ram 1500 Rebel is known for its off-road prowess, but with the introduction of the fifth generation models, this is a package that serves as a terrific all-around truck – whether you are driving it to and from the office, towing a trailer or playing in the mud.
Advertisement

I recently had a chance to spend a week driving the all-new 2019 Ram 1500 Rebel and during that time, I spent more time than usual touring the areas unpaved, dirt roads. I didn’t actually go off-roading with the Rebel, as I got to do that with the folks from the Ram brand when the new generation was introduced, but I did hit some of the roughest dirt roads my area has to offer. Of course, I also spent plenty of time driving on paved roads, as my overall goal was to see how it is living with the Ram Rebel.

Sure, it is a great off-road toy, but most people who buy half-ton trucks use them for more than just a weekend toy, so I wanted to see how the 2019 Ram 1500 Rebel performed in every day driving situations. Not surprisingly, it is good at everything.

The Daily Grind
While the 2019 Ram 1500 Rebel is the brand’s most off-road capable half-ton, serving as the sort of younger brother to the Ram 2500 Power Wagon, it is also surprisingly smooth on paved roads. Thanks to the Ram brand’s exclusive air suspension system, the Rebel offers a smoother ride than you get from any of the other popular off-road-ready pickups. Mind you, the Rebel does ride a bit rougher than the luxury level Ram trucks with the air suspension, but compared to other trucks that offer similar off-road-readiness, the Hemi-powered pickup offers the best ride quality on the road.

In addition to a smooth ride (as half-ton off-road trucks go), the 2019 Ram Rebel is surprisingly quick thanks to the 5.7-liter Hemi tucked under the hood. With 395 horsepower, 410 lb-ft of torque and the aggressively-geared 8-speed automatic transmission, the Rebel accelerates hard and fast from a stop, pulling hard to well beyond any posted speed limit in the United States. The Hemi-powered Ram isn’t the quickest or most powerful half ton truck on the market, but it is one of them and that makes the daily drive fun for those who like to drive their truck more like a sports car.

The bottom line with the daily drive is that while the 2019 Ram Rebel is engineered to be one of the best off-road trucks on the market, it is also the most comfortable off-road truck when it comes to on-road driving.

The Dirt Roads
I am fortunate enough to reside in the beautiful town of Milford, Michigan. The roads are very nice – at least where they are paved. Milford has many unpaved roads that are part of the daily commute for people in town, but only if those people drive vehicles that can handle the dirt. In many cases, the township keeps them fairly smooth, but during particularly rainy seasons, the dirt roads are lined with potholes that would swallow a small car. During those times, even higher-riding crossovers ease over the bumps and grooves in the road and when I was driving the 2019 Rebel, we had enough rain to replicate these unpleasant conditions.

Not surprisingly, the Rebel handled the rough local roads without breaking a sweat. The speed limit of 35 miles per hour is impossible for many vehicles when the roads are rough, but the Rebel covered the ground so easily at those speeds that it would clearly have gone faster, had the local laws permitted it.

In fact, when the roads are as rough as they were when I had the Rebel, I generally avoid them, regardless of what I am driving. The 2019 Ram 1500 made such short work of the rough roads at a time when most locals avoided them that I drove them as much as possible, cruising across the bumps and through the deeper, muddy areas without a care in the world. Really, it comes as little surprise that Ram’s most off-road-capable half-ton is fun to drive on rough, unpaved roads, but the Rebel truly shines brightest in these questionable driving situations.

Towing an Enclosed Car Trailer
In addition to driving the 2019 Ram 1500 Rebel with the 5.7-liter Hemi all over the areas paved and unpaved roads, I also logged some mileage with my enclosed car trailer out back. Those of you who regularly read my truck reviews know that I generally use a two-horse trailer for testing, but while I had the new Rebel, I took the opportunity to haul my Dodge Challenger SRT Hellcat to the drag strip.

Unfortunately, after a nice, sunny morning, the skies clouded up and rain ended any chances of racing, but I still got to see how the 2019 Rebel pulls my enclosed car trailer while it is all loaded up. For those wondering, the trailer weighs 3,200 pounds, my Challenger weighs around 4,500 pounds and I had about 300 pounds of other random items like a jack, drag radials, tools, etc. All in all, I would guess that my trailer weighed around 8,000 pounds when we hit the road.

It should go without saying that with my 8,000-pound trailer being well under the maximum towing capacity of this Ram, the Hemi had no issue getting the combo up to speed. All of that torque made low end acceleration smooth and as swift as you want with a heavy load out back, and the Rebel had no problem maintaining speed on steep inclines around town or on the highway. I have seen some people voice a concern about the performance of the Ram’s air suspension with a heavy load, but I pull trailers with literally every truck that I test and the Rebel performed just as well as any other half-ton truck in terms of ride quality and handling under load. Over rough roads, the Ram was easily kept under control as the trailer hit the bumps and at no point did it feel like the trailer was pulling the truck around the road. Some trucks with a load this big will get to “bobbing” on rougher paved roads, but the Ram Rebel performed flawlessly with my Hellcat Challenger in tow.

The Final Word
If you want a half-ton truck that can tackle off-road situations while also offering a smooth ride on paved roads, tons of acceleration and the ability to easily pull around an enclosed car trailer with a 4,500-pound, 707-horsepower Mopar muscle car inside – the 2019 Ram 1500 Rebel is the truck for you. There are most certainly trucks that are better off-road or smoother on-road or quicker, but there is no half-ton truck on sale today that does everything as well as the 2019 Ram 1500 Rebel.

Note: My apologies for the lack of images, but one of my pets destroyed the camera card with the majority of my pictures of the black Ram 1500 Rebel shown above. I took pictures of the truck and Challenger on the day that we were headed to the track with a different camera card, which is why all of the pictures here show the truck towing.