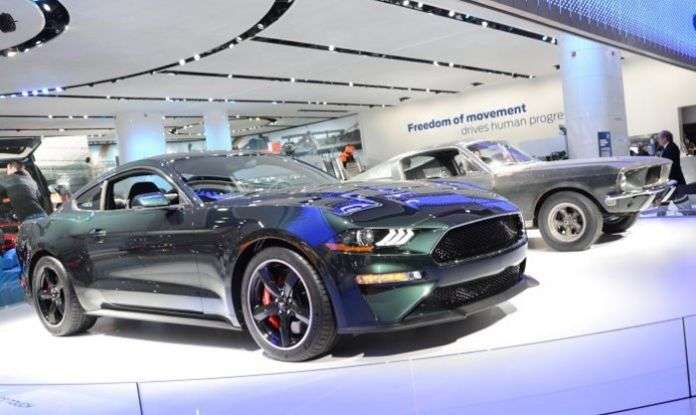 The right to own the first 2019 Ford Mustang Bullitt was auctioned off this past weekend at the 2018 Barrett-Jackson Scottsdale event, raising $300,000 for charity.
Advertisement

Each year, the Barrett-Jackson Scottsdale auction in Arizona is arguably the biggest collector car auction with the most incredible vehicles. The Scottsdale event often includes “first unit” cars being sold for auction and at the 2018 auction, the 2019 Ford Mustang Bullitt was among those vehicles being sold for charity.

Mind you, the information posted a few weeks back about a “special new Mustang” was what essentially tipped us all off to the arrival of the new Bullitt edition package, so this was the most talked-about vehicle being sold at this year’s Scottsdale auction before any bidding began. At first, we didn’t know for sure that it would be the new Bullitt, but once the movie-themed car was unveiled at the 2018 North American International Auto Show in Detroit’s Cobo Hall, it was made official – 2019 Bullitt #0001 was being auctioned off for charity.

The First 2019 Bullitt
The 2019 Ford Mustang Bullitt comes heavily loaded, with the features of the GT Premium Fastback and the GT Performance Pack coming as standard equipment, along with the unique design features of the Bullitt package. This includes the Dark Highland Green exterior paint with black wheels, a Bullitt-branded faux rear gas cap, red Brembo brake calipers and a black grille. On the inside, the Bullitt Mustang includes green stitching on the black leather seats, dash, door panels and center console, along with the Bullitt logo on the steering wheel center.

Most significantly, by adding the GT350 intake manifold, a larger throttle body, a new cold air intake system and an engine tune, this Mustang GT delivers “at least” 475 horsepower and 420lb-ft of torque. Final power numbers will be announced closer to the arrival of the car in dealerships, but we know that the 2019 Bullitt will offer more power than the 2019 Mustang GT.

The car on stage in Scottsdale was a preproduction unit, but the winner will be able to select whatever options they want on 2019 Bullitt Mustang VIN #0001.

Big Money for Charity
The 2019 Ford Mustang Bullitt rolled onto the auction block in Arizona on Saturday afternoon and when the final gavel came down, the movie-themed muscle car had sold for $300,000. All of that money will go to the Boys Republic in Chino Hills, California. This is a school for troubled youths and since being founded in 1907, this foundation has improved the lives of more than 30,000 at-risk kids. One of those kids was Bullitt star Steve McQueen, who later served as the chairman of the charitable foundation.

It was not announced who bought the right to own the first 2019 Ford Mustang Bullitt, but whoever he or she was paid $300,000 to a great cause while also claiming a great piece of Ford Mustang history.