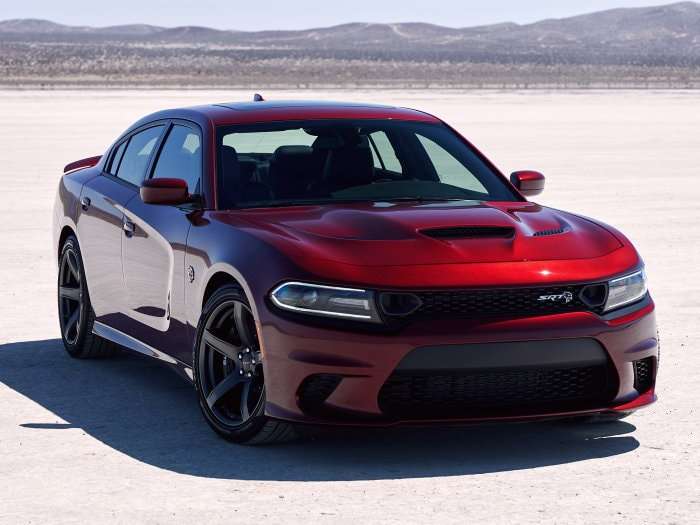 The 2019 Dodge Charger doesn’t benefit from the same high performance improvements as the Challenger, but the world’s most powerful sedan lineup does get a variety of upgrades for the new model year.
Advertisement

Over the course of the past week, the 2019 Dodge Challenger has been the hottest ticket in the automotive industry thanks in part of the introduction of the 797-horsepower Hellcat Redeye package. The Challenger also gets a new widebody variant of the R/T Scat Pack along with a little more power from the non-Redeye Hellcat, but literally none of those new model year changes from the coupe are included in the sedan lineup for the 2019 model year – but Dodge has made some small steps to attract more buyers to the world’s fastest four-door.

Lineup Changes
First up, the trim level lineup for the Dodge Charger has changed significantly for 2019. In the 2018 model year, you could order the GT package with standard all-wheel-drive or you could get the SXT, R/T, Daytona, Scat Pack, Daytona 392, SRT 392 or SRT Hellcat with rear-drive. For 2019, the GT is now a rear-wheel-drive package only, and there is now an SXT all-wheel-drive package. The Daytona trim level is now a package for the R/T or the Scat Pack (although it appears as though the content is the same) and the SRT 392 is gone altogether.

GT and R/T Facelift
New for 2019, the GT and R/T models both benefit from the SRT-inspired body design on the outside with some performance-minded improvements on the inside such as the sport bucket seats and an “enhanced” steering wheel.

Scat Pack Performance
The 2019 Dodge Charger R/T Scat Pack is powered by the same 485-horsepower Hemi as the 2018 models, but for the new model year, this package gains Launch Assist and Line Lock, as well as the new grille that is featured on the SRT Hellcat models. Line Lock makes it easier to heat up the tires before a drag strip run and the Launch Assist helps get the car down the track as smoothly and as quickly as possible.

Improved Hellcat
Finally, the 2019 Dodge Charger SRT Hellcat doesn’t get the added horsepower that the Challenger Hellcat gets for the new model year, but the supercharged sedan does feature some new go-fast goodies. Like the Scat Pack, the 2019 Hellcat Charger will feature Line Lock and Launch Assist, but the engineers have also added the After-Run Chiller and the Torque Reserve systems that are also included with the Challenger Hellcat.

The After-Run Chiller keeps the coolant moving through the intercooler to help reduce temperatures between track passes while the Torque Reserve system offers significantly higher levels of launch torque by allowing the engine to build boost while stopped. The current Hellcat Challenger and Charger without Torque Reserve launches with next to no boost, but with Torque Reserve, drivers can leave the line with nearly four pounds of boost pressure – leading to far more initial power and quicker track times.

The order banks for the 2019 Dodge Charger are open now and the company expects the first units to reach dealerships during the 3rd quarter of 2018.

Dean McManis wrote on July 2, 2018 - 10:00pm Permalink
I really do not understand the reasoning why they would not offer the same 797HP engine package that the 2019 Challenger Hellcat Redeye gets on both the Charger Hellcat and Jeep Trackhawk. I think that Dodge should share that amazing engine also with the Durango and Ram Pickup as well.
James young wrote on July 3, 2018 - 8:50am Permalink
I would like to see an express package (base model ram 1500 rag cab short box with the red eye engine and a 6 speed manual 2wd
Jeffery wrote on July 3, 2018 - 3:25pm Permalink
Its sad that all new cars from to 2004 and up has no room even have for a baby carseat do you really think smaller luxury cars are for a family of 4 on top of all the defects that comes with it IF YOU BUT THE SEAT ALL THE WAY BACK AND YOU CANT GET A BABY CAR SEAT IN THAN THAT CAR IS NOT FOR YOU MOVE ON DONT LET ANOTHER SALEMEN TRICK YOU OUT OF SAFETY FOR YOU AND YOUR KIDS OR GRANDKIDS
Dean McManis wrote on July 3, 2018 - 5:14pm Permalink
I am not sure where you get the idea that ALL new cars cannot fit a baby seat. Certainly there are some smaller cars that do not have the room, but most do. I have rented several Dodge Chargers in the past and for this class of car they have a very generous rear seat. Have you actually been unable to fit a child seat into a Charger?
kerry moore wrote on November 25, 2018 - 9:51pm Permalink
Got to be really stupid to not be able to get a car seat in a charger. I do it all the time. Now i could definitely see your point with the challenger.