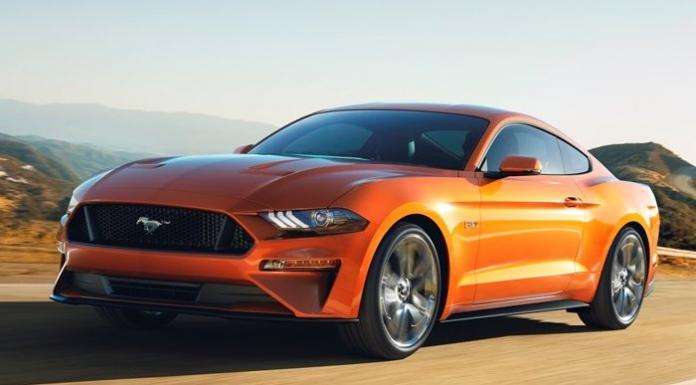 Ford Motor Company has finally announced the official power ratings for the 2018 Mustang in both EcoBoost and GT form, with the new 2.3L EcoBoost jumping up to 370lb-ft of torque while the 5.0L V8 climbs to 460 horsepower and 420lb-ft of torque – allowing the Mustang GT to dash from 0-60 in under 4 seconds.
Advertisement

We have known since January that the 2018 Ford Mustang would offer improved performance over the current models, with the promise of more torque for the 2.3L EcoBoost and the 5.0L V8 while the V8 also was planned to get more horsepower. Today, at long last, we learned just how much more powerful the 2018 models will be and the numbers are impressive, as the new Mustang GT will be the most powerful to ever of its type while the new Mustang EcoBoost is officially the most powerful base engine ever.

Also, with the promise of a 0-60 time in below 5 seconds, the 2018 Ford Mustang EcoBoost is also the quickest base model Mustang ever.

While the added power helps, a big part of that insane acceleration is the 10-speed automatic transmission, which offers lightning-quick shift times and more aggressive gearing for low end pull. An aggressively geared transmission has made a big difference for the Dodge Challenger and Chevrolet Camaro, so the Mustang is the last one to the party – but it pays off in a big way.

“Typically, when you shift gears, you give up time,” said Widmann. “In Drag Strip mode, the engine torque doesn’t drop when you’re shifting. You get peak engine torque and horsepower straight through thanks to our new Ford-built 10-speed transmission.”

Of course, in addition to the added power and performance, the 2018 Ford Mustang features a revised exterior design, so when these models begin reaching showrooms later this year – we could see yet another sales spike for the Ford pony car.