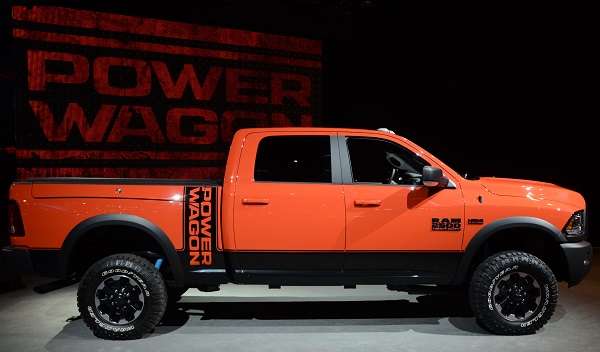 The Ram Power Wagon has always been the most capable truck in the heavy duty segment, but at the 2016 Chicago Auto Show, this rugged off-roader gets a facelift that includes new graphics, a new grille, new wheels and the same go-anywhere capabilities.
Advertisement

While Ford and Toyota have focused their off-roading efforts on their half ton (or midsize) trucks, the Ram brand has spent the past few years conquering the off-road segment with their Ram 2500 Power Wagon package. The 2017 Ram Power Wagon continues that legacy with the same mechanical bits as the previous Power Wagon, but this new beast sports a new look inside and out that is sure to appeal to enthusiasts thanks to some old school design. However, when compared to the previous Power Wagon, this new appearance package is a bit more subdued – serving as a better option for those who want the performance without as much “look at me” attitude.

The 2017 Power Wagon
Like the 2015-2016 Power Wagon, this new performance minded Ram 2500 is powered by the 6.4L Hemi with 410 horsepower and 429lb-ft of torque. That power is sent to all four wheels via a 6-speed heavy duty automatic transmission and a Borg Warner manual transfer case, which makes this vehicle quick on paved roads, unstoppable on unpaved surfaces and capable of towing more than 10,000 pounds. The Bilstein suspension setup on the front and rear affords this Ram 2500 incredible articulation at all four corners while also having more ground clearance than any other truck in the lineup – and more than any other truck in the segment.

However, that is all the same as the previous Power Wagon and really, why change things when the truck is literally unrivaled by any competitor in today’s market. At the same time, the Chrysler Group saw an opportunity to hold the interest of diehard enthusiasts in the form of an exterior and interior refresh – one which allows this Power Wagon to clearly stand apart from the version sold over the past few years.

The new features of the 2017 Ram 2500 Power Wagon begin on the outside, where the front end now wears a similar grille design to that introduced on the Ram Rebel. This removes the traditional crosshairs, with the RAM logo emblazoned across the face of this handsome performance truck. Like the previous truck, the 2017 Power Wagon includes a Warn winch in the package specific bumper which is finished in the same satin black as the grille and the graphics package.

Speaking of the graphics package, the 2017 Power Wagon does away with the sprawling splash decals on the bedside from the current model, instead going with a design similar to that of the Power Wagon from the late 1970s. This has the Power Wagon logo running vertically down the leading edge of the bedsides, a unique appliqué on the hood and a large Power Wagon logo across the tailgate. (It should be noted that if you order your new Power Wagon in black, the graphics are silver rather than black.) Also, the satin black from the front end flows along the bottom sides of the truck and into the rear bumper, with matching black wheel flares and a new set of black wheels wrapped in off-road ready Goodyear tires.

Best of all, to introduce the new Ram Power Wagon, the beastly truck drove down a set of platforms that would have been a problem for many trucks – but not the Power Wagon.

The 2017 Ram 2500 Power Wagon will hit showrooms later this year and when it does, I expect that this truck will be even more popular than the previous truck with a far flashier exterior. In the meantime, check out the debut of the Power Wagon in our video below!