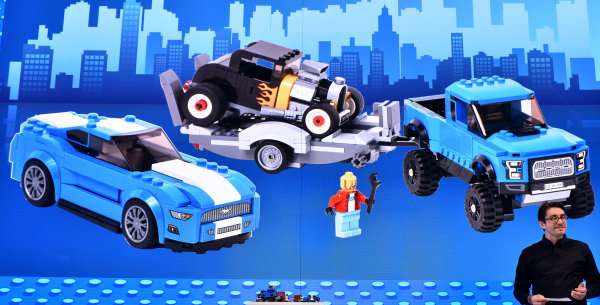 Ford Motor Company announced today at the Detroit Auto Show that the 2015-2016 Mustang and the 2017 Raptor F150 will go on sale in Lego form in March – with both of these cars joining the Lego Speed Champions collection.
Advertisement

We learned back in October that Lego would be offering the 2015 Ford Mustang GT and the 2017 Ford Raptor F150 toy kits in the near future and that time has come. Today at the 2016 North American International Auto Show in Detroit’s Cobo Hall, Ford Motor Company rolled out the new Mustang and F150 Lego Speed Champions kits, along with full information on both of the kits including pricing and release dates.

“The LEGO Group is one of the world’s top toy companies, and is loved by children and adults around the globe,” said Joe Hinrichs, Ford president, The Americas. “Many of us grew up playing with LEGO, so this is a dream project for all of us – including our engineers.”

The Lego Mustang and F150 Raptor
First up, we have the 2015 Ford Mustang GT Lego set. This set is made up of 185 bricks and in addition to the Mustang, it comes with a driver and a pit board. This kit will have an MSRP of $14.99.

Next up we have the 2017 Ford Raptor F150 Lego set. This is a much bigger set, with the truck, a trailer, a Ford Model A hot rod, some shop items including an engine hoist, a drag racing Christmas tree and a “crew of Ford workers to ensure top-quality work” – although the image of the kit only shows one Lego dude. I would expect a crew to include at least two Lego dudes, but I digress. The Raptor F150 kit has 664 bricks and an MSRP of $49.99.

Both of these sets are expected to go on sale in March and they will both be sold at Lego stores around the country and in Toys’R’Us stores all over the United States.

“We are excited about the new LEGO Speed Champions sets based on iconic Ford vehicles,” said Jill Wilfert, vice president, licensing and entertainment, The LEGO Group. “Each LEGO Ford car tells a story and has infinite play possibilities. With these new sets, kids can play out their ultimate car fantasies. They are able to role play and become the LEGO mini-figure, stepping into the greatest cars on earth.”