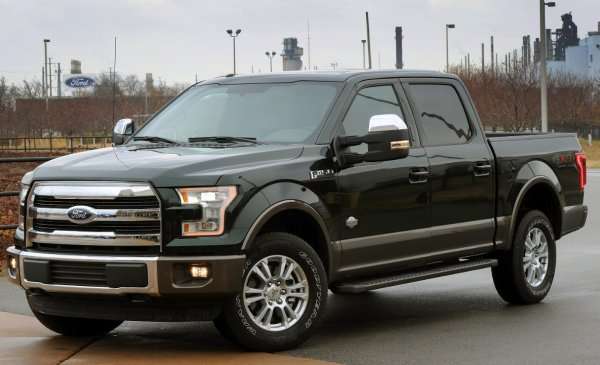 Production of the all-new 2015 Ford F150 officially began at the automakers Rouge Assembly Plant this morning and as the first aluminum Ford trucks roll off of the assembly line and enter the early quality control phase, consumers can expect to see these trucks at their local dealership sometime next month.
Advertisement

When Ford Motor Company introduced the 2015 F150 pickup at the 2014 North American International Auto Show in Detroit, the automotive world took notice more than any new pickup in the past. The 2015 F150 uses aluminum rather than steel for the vast majority of the body and while some people have praised FoMoCo for their dramatic and possibly industry-changing move, others insist that the lightweight half ton truck is doomed to fail due to the high costs associated with both manufacturing and repairing aluminum automotive bodies.

With the 2015 Ford F150 debuting in January, both critics and supporters have had almost 10 months to continue the debate as to whether or not the move to aluminum is a good decision. Critics have continued to insist that the move will be a mistake while supporters cannot wait to get their hands on a new F150 that is lighter, more efficient, more powerful and more capable than ever before. This morning, that wait is almost over, as Ford announced that production of the aluminum bodied 2015 F150 officially begins today.

“The all-new F-150 continues to advance my great-grandfather’s vision of building vehicles we can be proud of and our customers can depend on,” said Bill Ford, executive chairman, Ford Motor Company.

Early Interest Like Never Before
Ford Motor Company took a big (well calculated) gamble when they decided to build much of the 2015 F150 out of aluminum. While the use of aluminum helps to cut a tremendous amount of weight from the F150, which will allow this F150 to be more efficient and more capable than the previous generation, there is the ongoing concern that the aluminum panels won’t be tough enough to stand up to the abuse of “truck work” and when the body does sustain damage, fixing aluminum body panels is generally more costly than fixing steel panels. That concern of the aluminum body being easier to damage and more costly to repair has turned some critics away, but according to Ford, they have never seen interest in a truck ahead of the official launch like they have with the 2015 F150.

Since introducing the 2015 F150 back in January, more than 225,000 people have signed up for updates and information about the new pickup and through the Ford.com website, over a quarter million people have built their ideal next gen F150. Now, I would imagine that part of these record numbers in early interest stems from the fact that more people have access to sign up and build trucks online than ever before, but that doesn’t change the fact that plenty of prospective buyers are interested in the 2015 F150.

Ford is so convinced that there will be incredible demand for the new 2015 F150 that they have beefed up their workforce at the Rouge plant, bringing the total output of that plant and the Kansas City facility which also builds the F150 to 700,000 units annually. Should the new F150 be popular enough, the company very well could eclipse that 700,000 mark – especially in the first year when both 2014 and 2015 F150 models are being sold.

“The all-new F-150 is a showcase of innovation and class-leading capability for truck customers,” said Mark Fields, Ford president and CEO. “It underscores the product excellence and innovation we are delivering in every part of our business as we accelerate our pace of progress toward profitable growth.”

Production Begins Today, Deliveries Begin in December
After what was said to be the most extensive retooling process in the history of the assembly line, Ford Motor Company flipped the switch on the Rouge assembly line this morning and the first 2015 F150 pickups came to life. These trucks will likely undergo a strict quality control check before being shipped to dealerships around the country, which is expected to begin sometime next month.