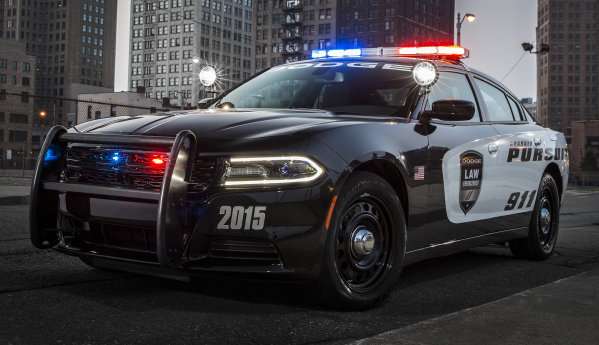 The Chrysler Group rolled out information of the new 2015 Dodge Charger Pursuit and while this is all bad news for street racers, the next generation Hemi powered cop car might just be the coolest police car ever – with the power and the look of the Charger R/T applied to a hard working special service vehicle.
Advertisement

While the Dodge Charger Pursuit is a relatively fresh face to the cop car game, this big, powerful sedan has stormed onto the scene in a big way. For the 2015 model year, the Charger Pursuit brings a sportier exterior design to the game with new technologies inside that will make the new Dodge cruiser even more accommodating for police officers around the country.

“Dodge has a strong police car heritage, and we are proud to offer a vehicle armed with modern muscle and cutting-edge technology to help law enforcement agencies perform their duties,” said Tim Kuniskis, President and CEO — Dodge Brand, SRT Brand and Fleet Operations, Chrysler Group LLC. “The new Pursuit police car is based on our new 2015 Dodge Charger. It delivers up to 370 best-in-class horsepower, is available in both rear- and all-wheel drive, has a new driver-focused cockpit and adds new safety and security features, as well as new state-of-the art technologies, all designed to deliver the ultimate performance expected from Dodge.” New Look Outside, New Technology Inside
The changes to the 2015 Dodge Charger Pursuit begin on the outside, where this new cop car wears the same sporty styling as the ’15 Dodge Charger R/T that debuted back in April. This includes new LED turn signals and LED daytime running lights up front in high tech curved formation inside of the angry looking headlight assemblies while HID projection headlights provide the most light possible for when the cops are hunting perps. Also giving the 2015 Charger Pursuit a sporty look is the new grille design that looks great and helps let plenty of fresh air into the engine bay to both feed and cool the engine. Out back, the Charger Pursuit wears the LED racetrack taillight, which features new “ribbon” technology that creates one solid light unit all of the way around rather than a collection of 144 clearly unique LEDs. This doesn’t make the Charger a better cop car, but it definitely makes it a better looking cop car.

Inside, the 2015 Dodge Charger Pursuit has a customizable 7 inch gauge cluster, a 5 inch touchscreen with access to the newest UConnect system, a new system interface module that allows the police force to add things like the lights, siren and other police features cleanly and easily. The new Charger also sports a new set of front seats that are designed to be comfortable for officers wearing full gear – including space for a holstered gun so that it isn’t always jamming into the cops’ sides.

Hemi and Pentastar Power – and AWD
The 2015 Dodge Charger Pursuit is available with the 3.6L Pentastar V6 and the 5.7L Hemi V8. Rear wheel drive is standard on both the V6 and V8 models, but unlike the consumer level 2015 Charger, the Hemi is available with all wheel drive. Also, the new cop car doesn’t get the new 8-speed transmission that is standard in all new civilian Chargers, meaning that the Pursuit still comes with the 5-speed automatic transmission from the previous models. I am guessing that the Chrysler Group went with this transmission rather than the new 8-speed unit due to cost – or due to the level of abuse handed out to police car transmissions.

In any case, the 2015 Charger Pursuit offers a mix of 292 horsepower and 260lb-ft of torque from the Pentastar V6 or 370 horsepower and 390lb-ft of torque from the 5.7L Hemi. The Hemi engine will likely allow the 2015 Charger Pursuit to maintain its Michigan State Police Car lap record at Grattan Speedway, while those new cop cars fitted with the V6 will likely be among the best performing modern V6 police vehicles. The best thing about the 2015 Dodge Charger Pursuit is that the distinct headlights of the new Charger should be very, very easy to spot coming up behind you at night so for those of you with a big need for speed – it will be hard for these cars to sneak up on you. However, with so much power on hand and a sport tuned heavy duty suspension paired with massive brakes, the 2015 Charger Pursuit will be a nightmare for those folks looking to outrun the cops.

Click any of the thumbnails above for a closer look at the new Charger Pursuit!

Mark Day wrote on August 12, 2014 - 1:06pm Permalink
There is nothing cool about these "cop cars". Not when I'm paying for them and they're mostly used to extract more money from targeted motorists. For some, maybe red light cameras are cool too…