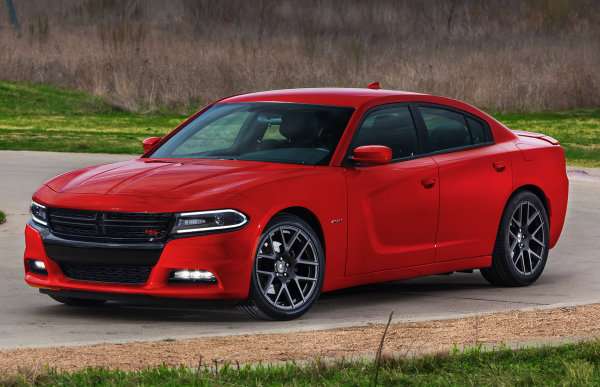 The 2015 Dodge Charger Debuts with a Controversial New Look

The first images of the 2015 Dodge Charger leaked onto the internet last night, revealing the refreshed exterior styling that has proven to be more than a touch controversial due to a high tech look that critics are accusing of being too much like the smaller Dodge Dart,but regardless of what else the new Charger might look like - this four door muscle carlooks sharp from all angles.
Advertisement

We knew that the 2015 Dodge Charger would debut with a new look at the 2014 New York International Auto Show and we even had a teaser showing a vastly restyled headlight, but since the first images of the newest Charger leaked last night, there has been an uproar across the social networks about the Dart-like qualities of the 2015 Charger. While I am not among the people who are so violently offended by the redesign, I am among the group of people who is truly shocked to see Chrysler stray so far from the look of the 2014 Charger. The current (2014) Dodge Charger sedan wears an aggressive design that was introduced for the 2011 model year with a great deal of success, making it that much more of a shock that the Chrysler Group would offer up a midcycle refresh of the Charger that focused on an exterior redesign. What is even more shocking is that the company has seemingly changed the aspects which had proven to be the most popular features of the ultra aggressive muscle sedan. Much to the chagrin of both Mopar lovers and Mopar haters, the 2015 Dodge Charger wears a front end that is like nothing that we have seen on the Charger in the past…although critics insist that we have seen this front end on the smaller Dodge Dart. While Dodge will claim that pretty much every body panel of the 2015 Charger is new, it is impossible to talk about this car without addressing the new front end. Gone are the large, angry looking headlights that have proven to be so popular and in their place are long, thin headlights that wrap around the front corners of the Charger. These headlights have LED trim above and below the HID production headlight bulbs for a look that is both stylish and high tech – yet so distinctly unlike the 2014 Charger and that is the big part of why this redesign is so controversial. Between the headlights sits a recognizable crosshair grille which flows down into the angular lower fascia and in that aspect, the 2015 Charger has an undeniably Dart-like look. That has been the key critical point of the new Charger face, but if you set aside the fact that the 2015 Charger looks like the Dodge Dart this isnt a bad looking car by any means. In fact, had this Charger debuted before the Dart, people would have been applauding Chrysler for offering a Dart that looks like the popular Charger. Above this new front end, the 2015 Dodge Charger wears a reformed hood that has a significantly different design that the 2014 models and that hood flows into a “brow” that comes down further over the grille and headlights than the current model. This gives the 2015 Charger a lower, more aggressive stance up front that I find to be a great evolutionary shift for the big Dodge sedan.

From the side, the 2015 Dodge Charger (shown in all of these pictures in R/T trim) looks very much like the 2014 Charger, with the exception of the LED headlights that wrap around to meet the fenders and the similar wrap around effect with the taillights. The rest of the side view of the 2015 Charger follows the same theme as the current models with a deep indentation beginning in the front doors and traveling towards the back of the car. It looks like the B pillar might be slightly more swept back to give the greenhouse a sportier look as well. Out back, the 2015 Dodge Charger still sports the gorgeous LED race track taillight design, but it has been refined with a thinner lens that wraps around a bit to the side of the car – while the 2014 models have their taillights squarely on the rear face of the car.

On the inside, the 2015 Dodge Charger gets a new gauge cluster with a 7 inch center screen, a restyled 3-spoke steering wheel and the 8.4 inch touchscreen is now standard across more trimlines (everything except for SE) – but for the most part the interior of the 2015 Charger is similar to the 2014 models. The Charger has a great interior layout, so the inclusion of new driver information technology will only improve an already impressive cockpit. Although some folks are hating on the exterior design of the 2015 Dodge Charger, people hate on everything when it is new – from the 2015 Ford Mustang to the 2014 SRT Viper to the 2014 Chevrolet Camaro – so this new Charger will likely do just as well as the current models. While some diehard lovers of the current Charger design might be turned off by this new, high tech front end look, the new design should attract those folks who want a car that is unquestionably more sophisticated looking while still maintaining the muscle stance…and the big performance.

John Goreham wrote on April 17, 2014 - 3:31pm Permalink
It's obviously a big Dodge Dart in many ways, which is fine. However, the new Camry also uses that look when viewed from the front. The dark piano center section surrounded by body-colored painted parts with the grill below the black. That was derivative of the new Corolla design. I'm not saying this car overall looks like a Corolla, but straight on, the design elements look alike. Charger people are not going to like that comparison.
Patrick Rall wrote on April 17, 2014 - 5:47pm Permalink
If they had gone with this grille/fascia design with headlights that are similar to the current 2014 models, they wouldnt have had as much negative noise about this car. The combination of the un-charger-like headlights and the dart-like grille is too much for many people...but they will all get over it and buy one anyway. If they dont like it, they can go somewhere else and buy a performance oriented rear wheel drive sedan. Oh wait, no they cant because no one else offers anything like the Charger.
mike wrote on April 18, 2014 - 6:26am Permalink
They do now. Up until this year no one did. But now the Impala SS entered the field. Dodge took their lead with the Charger which WAS a better car, and just handed over any competitive sales to GM now.
Mike wrote on April 18, 2014 - 6:24am Permalink
Horrible! A complete joke. No more Charger. It IS a DART! And no V8 upgrade? No V8 AWD? The beginning of the end for Dodge, as Fiat wants. This company was on such a roll too. Now it is just a neutered Charger that looks like all other euro styled junk with ugly front ends, hideous wrap around and slanted lights, and no style or personality at all any more. Goodbye Charger.
Connor wrote on April 20, 2014 - 2:27pm Permalink
They added a 8 speed for the HEMI and upped the power a little by making it respond better at lower rpm,plus the lower geared 8 speed will make it jump like mad ! Dont be closed minded,the Charger looks great,it looks tough !!
Connor wrote on April 20, 2014 - 2:23pm Permalink
The Charger looks great ,best looking 4 door around !!! Side view looks amazing !! Front is nice as well...I remember in 2005 the 06 Charger ,people were in uproar as it was a 4 door !! LOL !! Just google the 2015 Charger and look at it from other angles,the side,back even the front looks mean yet elegant !!
JP wrote on April 24, 2014 - 10:17pm Permalink
I think the charger looks great. I love the Easter eggs on it. The only one I have a hard time with is the jeep Cherokee Just can't get into that front.