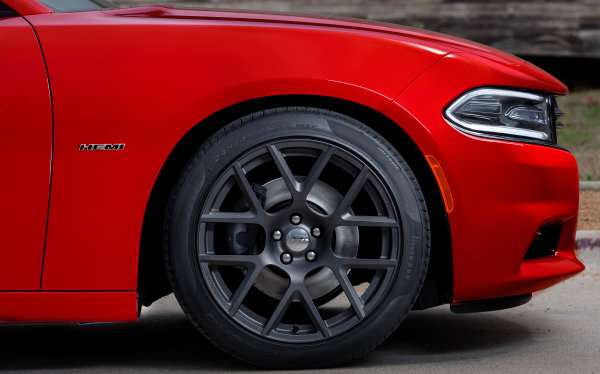 Prediction: There Will Be a Dodge Charger Hellcat - but Not with a Manual Transmission

Building World’s Most Powerful Sedan
We don’t know exactly how much power the 2015 Dodge Challenger SRT Hellcat will make, but the company has promised that it will pack at least 600 horsepower and 575lb-ft of torque and even if those are the exact power figures, they would make the Dodge Charger SRT Hellcat the most powerful sedan sold in America. The current most powerful sedan sold in America is the Mercedes Benz E63 AMG S 4MATIC which packs a twin turbo 5.5L V8 with 577 horsepower and 590lb-ft of torque so numbers of 600hp and 575tq would make the Charger Hellcat the most powerful sedan in terms of horsepower while facing a slight disadvantage in torque.

The simple prospect of a 600 horsepower Dodge Charger SRT Hellcat has worked the Mopar community into a frenzy as many enthusiasts are demanding and even pleading for the Chrysler Group to build a Charger with the supercharged Hellcat Hemi. These folks essentially want all of the performance aspects of the 2015 Dodge Challenger SRT Hellcat in a new Dodge Charger right down to the 6-speed manual transmission. I believe very strongly that the SRT engineers will indeed equip a future Dodge Charger with the Hellcat Hemi, but I do not believe that the company will mate the Hellcat to a proper manual transmission in the high performance sedan.

A Hellcat Charger Seems Like an Easy Task
Since the modern Dodge Charger and Dodge Challenger were introduced, they have shared a chassis platform and an engine lineup so when one of them has gotten a new engine, so has the other. The introduction of the 3.6L Pentastar V6 and the 392 cubic inch Hemi applied to both vehicles and although the Hellcat Hemi is a very different beast than either of those other two engines, the strong demand for the SRT Charger over the past few years would lead me to believe that there is certainly a market for an even more powerful Mopar muscle sedan.

Also, since we know that every engine from the Challenger engine bay will comfortably fit into the Charger engine bay and that the 8-speed automatic transmission is shared, there seems like no mechanical reason why the Hellcat wouldn’t nestle right down under the hood of the Charger. Of course, there is the issue of fuel economy and impending CAFÉ requirements, but considering the likely low volume of the high priced Hellcat package, there would be very little impact on Chrysler’s CAFÉ numbers with the introduction of a 600hp Charger.

It Might Be a While and It Will Be Expensive
While I fully believe that the Chrysler Group will eventually load the Hellcat Hemi V8 into the Dodge Charger sedan, I think that it could be at least a couple model years before this happens. The Hellcat will arrive in the Challenger for the 2015 model year and it seems to me that if the 2015 Charger was also going to have the Hellcat, the company would have talked about it by now. With 2015 model year vehicles already entering production, it is unlikely that the company will announce something as gigantic as the most powerful sedan engine in America during the model year in which it would be introduced. In other words – since the company hasn’t talked about a Hellcat Charger by now, I don’t think that it will happen for the 2015 model year. However, they could use the 2015 North American International Auto Show to introduce a Hellcat Charger as a 2016 model so in my opinion, the soonest that we could see a Hellcat Charger would be two model years away.

Regardless of when it arrives, I expect that the Dodge Charger SRT Hellcat will comfortably be one of the most expensive non-Viper cars that Dodge has ever sold. Considering that the current Dodge Charger SRT with the 392 Hemi easily climb over $50,000, I would expect a price tag somewhere in the area of $60,000 and at that price, it will still be more than $30,000 less expensive than the closest comparable high performance sedan.

Now this is all speculation on my part so there could very well be a 2015 Dodge Charger SRT Hellcat with 600 horsepower and a 6-speed manual transmission. Honestly, I hope that I am wrong and that the Hellcat Charger arrives in showrooms within the next few months with a manual transmission...but I certainly wouldn’t bet on it.

So, if you are looking to make a big purchase and the idea of a Dodge Charger SRT Hellcat with more than 600 horsepower, I believe that you will have your dream car within the next couple years…but you still won’t be able to shift it yourself beyond hitting the up shift and down shift paddles on the steering wheel.

Charles MacRae wrote on June 18, 2014 - 10:32am Permalink
I think the hellcat motor should become an option for the viper. Along with the 6.4 HEMI. This would bring volume up and overhead and therefore price down. It would then be a fair alternative for the corvette and would help to secure a future for the viper. It will be a tragedy for us all to lose the viper.